The final installment in our Holiday Preview series. Watch for more holiday events among future picks. ’Tis the season.

Winter Wonderland: A Nordic Christmas at the American Swedish Institute. The festivities begin this Saturday, Nov. 15, with a family day of musical performances and activities. 10 a.m. to 5 p.m. Five rooms in the Castle have been decorated to represent the holiday traditions of the five Nordic countries (Iceland, Denmark, Norway, Finland, Sweden); a sixth shows how Scandinavian design has made its mark on Minnesota designers. ASI is going all-out Christmas crazy for almost two months. Visit the website FMI on exhibits and events. Museum admission $9–$5, members free. Nov. 15–Jan. 11. Sorry to have to break this to you, but the Lutfisk Dinner on Saturday is sold out.

Christmas by Candlelight at the Capri. With Sanford Moore at the piano, Greta Oglesby and Dennis Oglesby sing holiday classics in a candlelit setting. Ticket sales benefit the Plymouth Christian Youth Center’s annual Children’s Christmas Gift Sale, when low-income kids in North Minneapolis can select up to five new gifts for their loved ones with a pre-purchased $1 ticket. Last year, nearly 1,300 children gave more than 6,000 gifts to their moms, dads, grandparents and siblings. 7 p.m. Monday, Dec. 8. FMI and tickets ($25). 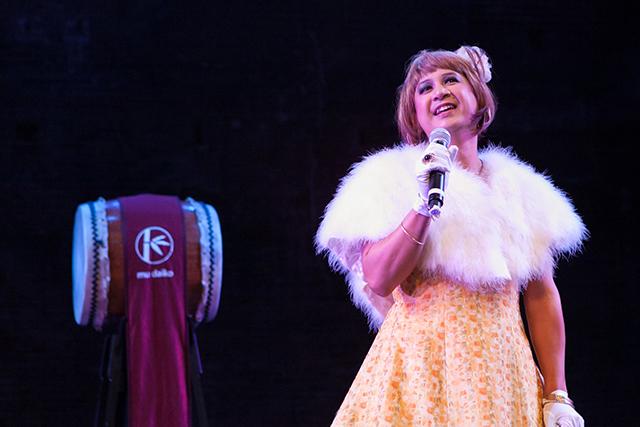 Photo by Heidi Bohnenkamp
Randy Reyes as Jasmine in Mu Performing Arts’ “A Very Asian Xmas” at the Southern Theater.

Twin Cities Gay Men’s Chorus: “Joyful and Triumphant” at the Ted Mann. Hearing this chorus, 181 members strong, is always a thrill. This year’s holiday show features the Copper Street Brass Quintet, two world premieres by composer Michael Shaieb, John Rutter’s “Gloria,” a selection of holiday songs old and new, and the Chorus’ signature closing, “Walk Hand in Hand.” If that one doesn’t get you, you have no heart. The concert is also the CD release for their new holiday album, “Joy,” with live recordings from the 2012 and 2013 concerts and four newly recorded songs from “Joyful and Triumphant.” 8 p.m. Friday and Saturday, Dec. 12 and 13, 2 p.m. Sunday, Dec. 14. FMI and tickets ($25-$53).

Karrin Allyson: “Yuletide Hideaway” at the Dakota. Now based in New York, jazz singer Allyson is a great favorite in the Twin Cities. Released in 2013, “Yuletide Hideaway” is one of those CDs you’ll bring out every year. Allyson is a classy, swinging singer, with a voice that warms you and sends shivers up your spine. 6 p.m. and 8 p.m. Sunday and Monday, Dec. 21 and 22. FMI and tickets ($25–$40).

We get all excited about up-and-coming young artists. We heap praise and Lifetime Achievement Awards on revered older artists. But what about those in mid-career? Paul Herwig, co-artistic director of the Ivey-winning Off-Leash Area, thinks it’s time to shine some light on them. So he’s starting something new in the Twin Cities this weekend: the annual Right Here Showcase, a festival of contemporary performance.

“It’s a classic scenario,” Herwig told MinnPost. “Artists in their own town aren’t supported until they leave. I’m like – let’s do it now. This is a taking-a-stand project, long overdue.”

Herwig got the idea for Right Here after touring North American performing arts festivals in Toronto, Portland, and New York. All featured local and regional artists on the same bill as their national and international counterparts. Herwig returned home and applied for a grant from the State Arts Board to start Right Here. With the grant, he was able to give each artist a commission and technical support: lighting design, a stagehand, a sound operator, a house manager, promotion, and a place to present his or her work: the James Sewell Ballet Tekbox at the Cowles. And, he emphasized, “everybody’s getting paid.”

Six artists will perform over two weekends, two artists each night. All are at least 30 years old, currently reside in Minnesota, have lived here for at least five years, and have been working professionally in the performing arts for at least ten years. Each will perform an hour-long piece, with a half-hour break in between. “Just like the Fringe,” Herwig said. “They’re great, compact little gems.” Food and wine will be available in the lobby during the breaks, free to audience members. Artists will likely show up to chat.

The artists appearing in the inaugural Right Here Showcase are Bart Buch (puppetry), Gadu (Kats) Fukasawa Schmitz (butoh dance), Kym Longhi (movement and theater), Rosy Simas (contemporary dance), Deborah Jinza Thayer (contemporary dance), and Vanessa Voskuil (contemporary dance). Each will perform a new work created for Right Here, or a recent work that has been substantially re-envisioned or redeveloped. “These are excellent people at a national level that more people ought to know about,” Herwig said. “Their work deserves to be seen.”

Go here to read about the artists and what they’ll do at the showcase. Reserve tickets here. There’s a $10–$25 suggested donation for each night. All three evenings (tonight-Sunday, Nov. 14-16) start at 7:30 p.m., with performances scheduled at 7:30 and 9.

Opens Friday at 2001 A Space: Illustration Work by L.K. Hanson. Each Monday in the Star Tribune, social and political cartoonist L.K. Hanson’s “You Don’t Say” op-ed feature combines quotation with illustration to make a point, often one that skewers. Last Monday’s paired words by Heinrich Heine (“Wild, dark times are rumbling toward us”) with recent election results. A former Strib staff artist, Hanson will show more than 100 pieces of original art from “You Don’t Say.” Reception 6–9 p.m.  Through Nov. 30.

Opens Friday at Theatre in the Round: Agatha Christie’s “Witness for the Prosecution.” When a young married man spends many evenings with a rich older woman, he’s the chief suspect when she’s found murdered. Not so fast; this is a play by the Queen of Suspense. Lynn Musgrave returns to direct her second Agatha Christie for TRP. 8 p.m. FMI and tickets ($22). Through Dec. 14.

Saturday at MacPhail: “Reflections” with Nachito Herrera, J.D. Steele, Mischa Santora and Jacqueline Ultan. It takes imagination to put those four on the same program, because they seem so very different. Herrera is a fiery Cuban pianist, Steele a soulful singer (and a member of the famous Steeles), Santora a classical composer, Ultan a fearless cellist. Herrera, Steele and Santora have all written original works reflecting their own life stories and musical journeys. Herrara, Steele and Ultan will perform them. 8 p.m. Tickets $25 (adults), $15 (6–18 and seniors). Call 612-767-5250 or buy at the door.

Monday at Icehouse: Firebell “Impossible Vacation” CD Release. Guitarist Park Evans, bassist Graydon Peterson and drummer Jay Epstein have played together since 2009, but this is their first CD. It’s a beauty. All are thoughtful, poetic players, less interested in standing out than in joining together to create that magical trio sound. As a result, there are many luscious moments, and if these tunes — including many originals by Peterson and Evans — sound this good on a recording, they’ll be even better live. 9:30 p.m. $10 at the door also gets you a copy of the CD.