What is Bharatanatyam, and what is it doing in Minnesota? Bharatanatyam is a 2,000-year-old, continually evolving, highly structured, physically demanding, multidimensional, deeply emotional, profoundly spiritual and drop-dead gorgeous temple dance tradition from southern India. It’s here, as part of our state’s cultural fabric, because Ranee Ramaswamy moved to Burnsville from Chandanagore, India, as a young wife and mother in 1978.

In 1992, she founded a company called Ragamala Music and Dance Theater. A lot happened in between and after, and if you want to know more about that, we refer you to the document the McKnight Foundation prepared about Ranee the year they named her a Distinguished Artist, one of many awards prestigious awards she has won. (Most recently, Ranee was named a 2014 Doris Duke Fellow.) 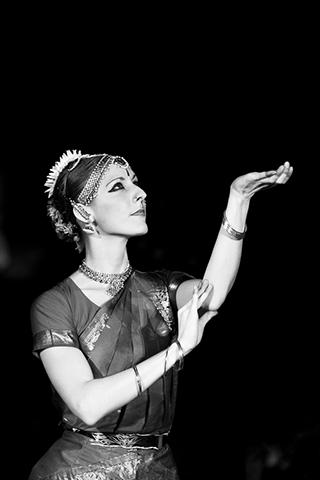 Today Ragamala Dance tours nationally and internationally. The company includes Ranee and her two daughters, Aparna and Ashwini; dancers Jessica Fiala and Tamara Nadel; and musicians, usually Rajna and Anjna Swaminathan (mridangam and violin) and vocalist Lalit Subramanian. Ranee and Aparna are co-artistic directors, choreographers and principal dancers. Fiala began training with Ragamala in 2006; Nadel has performed with the company since 1994.

The problem with Bharatanatyam, if one can call it that, is you don’t know where to look, especially when several dancers are on stage at the same time. Do you focus on the rhythmically pounding, slapping bare feet with their red-painted toes? On the delicate, expressive motions of the hands, and the painted fingertips? The elongated, elastic torsos? The jewel-toned silk costumes with their gold embroidery and pleated skirts? The sculptural poses? Or a single dark eyebrow, raised just so? Which eyebrow? Whose?

Those are questions you won’t have to ask during three upcoming shows, starting tonight at the Lab Theater. In a three-part program called “Margam” (a word meaning “pathway”), Ragamala dancers Fiala, Nadel and Ashwini Ramaswamy will each give a solo performance. Choreographers Ranee and Aparna decided what they wanted each piece to be about and created movements for it; each dancer will infuse her piece with her own personality and make spontaneous choices onstage. It’s Bharatanatyam, Ragamala-style, an ancient tradition made contemporary and improvisatory.

For newcomers, it’s a chance to zero in, watch closely and truly see this complex and fascinating dance form. For fans, it’s an opportunity to consider one stellar dancer at a time. And for everyone, there’s live music by an exceptional ensemble: the Swaminathan sisters, Ramya Sundaresan Kapadia on vocals, Ranee and Aparna on nattuvangam (cymbals).

Tonight (Thursday, Nov. 6) at the Lab: Jessica Fiala. Tomorrow, also at the Lab: Tamara Nadel. Both at 7:30 p.m. FMI and tickets ($15/$10). Next Wednesday, Nov. 12, at Carleton College’s Weitz Center: Ashwini Ramaswamy. (Along with work choreographed by her mother and sister, Ashwini will dance the piece she performed in October at Northrop.) Ashwini is a Carleton graduate, and her event is free and open to the public.

Over the years, the Ramaswamys and Ragamala Dance have received numerous grants from the Jerome Foundation for travel, study, and the development of new dance works. Ranee’s first Jerome was in 1988; the most recent went to Ashwini in 2014.

In the late spring of 2015, Jerome Foundation President Cynthia Gehrig will step down after 36 years of leading the St. Paul-based foundation that supports artists and arts organizations in Minnesota and New York. During her tenure, the foundation’s endowment grew from $9 million to almost $100 million, and artists in all kinds of disciplines – dance, film and video, literature, studio arts, music, fiber arts, theater, ceramics – were given the support they needed to develop and grow. Exhibitions by Jerome Fellows are on now at MCAD (through Nov. 9) and the Minnesota Center for Book Arts (through Nov. 30); another opens at the Textile Center on Nov. 13. Here’s Rohan Preston’s piece on Gehrig for the Star Tribune.

And if you’ve ever wondered why the Jerome Foundation is based in St. Paul, it’s because founder Jerome Hill, a painter, photographer, filmmaker and composer, was the grandson of James J. Hill.

Tonight (Thursday, Nov. 6) at the Minnesota History Center: Toys and Tunes with Dan Chouinard and Friends. Return to a time of Saturday morning cartoons, footie pajamas, the Easy-Bake Oven, Slinky, Twister and more. Chouinard at the piano will be joined by Maria Jette, Prudence Johnson, Dane Stauffer and Beth Gilleland. Related to the “Toys of the ’50s, ’60s and ’70s” exhibit, which closes Jan. 4. 8 p.m. Register online ($25/$20 MNHS members).

Tonight and Friday at Northrop: Hong Kong Ballet. One of Asia’s premier classical ballet companies dances an adaptation of Puccini’s “Turandot,” choreographed by Natalie Weir. The story is one of the most famous in opera: A mandarin proclaims that anyone who seeks the hand of the Princess Turandot must first solve three riddles. If he fails, he dies. As the ballet begins, the 100th suitor is executed. It’s more than the usual number of bodies for ballet, even for opera. We’re promised elaborate sets, beautiful costumes and pristine technique. 7:30 p.m. Thursday, 8 p.m. Friday. FMI and tickets ($49–$69).

Friday at Icehouse: The Cordova Quartet. Accomplished young soloists and go-getters, Cordova formed at Rice University in 2013; it is currently the Young Professional String Quartet in Residence at the University of Texas and a Madeline Island Music Camp Fellowship string quartet. Over the dinner hour at Icehouse, they’ll play a program of classical and popular tunes. We’re pretty sure this is the first time a classical string quarter has set foot on the Icehouse stage. 6:30 p.m. No cover.

Friday at Patrick’s Cabaret: Book launch event for “Pieces of Sky” by J. Otis Powell. “Stories are everafter and it’s all about the story,” says one of the characters in Powell’s new chapbook of prose and quintets. The spoken-word legend is joined by musicians Donald and Faye Washington and Davu Seru for what’s being called “an improviXational actuality.” Signing and reception to follow. 7 p.m. Tickets here ($10) or at the door; admission includes a copy of the chapbook.

Friday at the Weinstein Gallery: “The Fashion Show” opening reception. An exhibition of fashion images by leading women photographers. You might not think this is such a big deal, but Weinstein calls it the first exhibition of its kind in the United States, which is a big deal. Artists represented range from Louise Dahl-Wolfe, who shot for Harper’s Bazaar in the 1930s, to 20-year-old Olivia Bee. 6-8 p.m. Free.