If you’ve been anywhere in Minnesota live music is heard, chances are you’ve bumped into Paul Metsa on the stand or at the bar. Guitar slinger, bluesman, folkie, singer, songwriter, bandleader, recording artist, radio host, activist, schmoozer, hustler, poet, storyteller and author, the hard-working, affable Metsa is a true Minnesota original, born on the Iron Range and based in Minneapolis since 1978. He has won seven Minnesota Music Awards and played more than 5,000 gigs. He has a rescue dog named Blackie he adores.

On Christmas weekend at the Phoenix Theatre in Uptown, former home of the Brave New Workshop, Metsa will star in a new musical about himself and his life, based on his chatty, colorful and critically acclaimed memoir, “Blue Guitar Highway,” published by the University of Minnesota Press in 2011. Writer, actor and fellow storyteller Jim Stowell has adapted the book for the stage. Metsa will be joined by his longtime cohorts Willie Walker, soul singer, and Sonny Earl, harmonica wizard; gospel singers Mari Harris and Randi Starr Hudson; and jazz man Dave “Maz” Maslow on upright bass and accordion.

We jumped at the opportunity to speak with Metsa. If you get the chance, so should you.

MinnPost: “Blue Guitar Highway: The Musical.” How did this happen?

Paul Metsa: It kinda developed organically on its own after I had done [several] readings and performances at bookstores. The music goes really well with the stories, and the stories go really well with the songs, and they’re all interrelated. It seemed like this could be a strong theatrical piece, and I’m hoping it is. And hopefully, this is something I can take on the road

MP: How did you end up working with Jim Stowell?

PM: This thing has been percolating for about a year and a half. The first man I approached about it – I went right to the top – was John Clark Donahue [founder and former director of the Children’s Theater Company]. I’d gotten to know John and saw a lot of his work and I thought, what the hell.

We had three or four illuminating lunches. In retrospect, I wish I would’ve taped them. They were like “My Dinner With Andre.” He was interested at one point in directing, and then he ran into a time crunch and had to drop out. He was very kind about it, very nice.

When Donahue dropped out, I called my friend [actor] Chris Mulkey. I got to know him several years ago, when he was making a movie called “North Country” that was filmed in the Iron Range. I was trying to pitch some songs to the soundtrack, all of which went to the other folk singer from the Iron Range. I told Chris what happened, and he sent me an email saying, “One door closes, another will open.” That night, he and his wife Karen Landry did a reading with Stowell. They said, “Hey, Metsa’s got this piece he’s working on.” Stowell said, “Tell Metsa I’d love to work with him.” It was that simple and timely.

Stowell is a pure storyteller. All he needs is a stage and a chair and he’s off to the races. He’s also adapted a few books for the theater. He took my book, read it over a weekend, and we started to get together about a month ago. He’s helping me develop the infrastructure and architecture and story arc.

MP: All important, because your book is not exactly linear.

PM: No, not at all, which I blame on psychedelics from the ’70s. My brain sometimes doesn’t know how to form a period.

MP: “Blue Guitar Highway” is a series of stories that go back and forth in time, and you love a simile more than anyone I’ve ever met, and your language is rich and vivid. How does that all translate into a musical?

PM: Parts are very poetic, not unlike the songs I write. So I want to preserve those – not all of them, but the ones that pertain to the story we’re trying to tell. Some will be memorized, some I’ll read, and some I’ll just shoot from the hip. Parts of the show will be improvised. We’ll just go with the moment, maybe have a little audience interaction. And interplay with the band. They’re gonna be my Greek chorus.

MP: What is the story?

PM: It’s my life story, and it starts at the beginning with my first guitar, and listening to music with my grandfather – his Finnish 78s – and helping him clean his bar when I was a kid, where we’d listen to Patty Page and Hank Williams and Johnny Cash on the jukebox. How that influenced me, and I fell in love with the guitar at a very young age, and then became a musician and experienced life as a son, as a boyfriend, as a guitar player, dabbled in substances and ended up in jail.

It’s a story of perseverance told through the lens of a musician’s life. But the wider story is, how do you stay true to what you love to do and still function as a family member, as a community member, and try to live within the bubble and outside the bubble at the same time? I’m calling it “50 Shades of Spaulding Gray.”

MP: Will the musical end where the book ends, or will you bring us up to date? You recently lost your father. 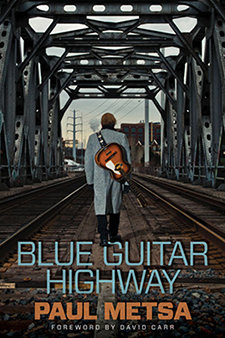 PM: I’m gonna combine losing my father, which was March 10, with the end of the book. My father passing was another reason I felt like it was time to do this.

I said to myself – really, now what the hell do we do? You’ve got the book, you’ve got the songs, and the two biggest moments of your life are when your mother dies and when your father dies. The first act ends with my mother passing away in ’94. And the end is gonna be my father. So, in a way, this play is a love letter to my mom and dad and a way of keeping them alive.

It’s fun to share the support I had from them, going through life, as a kid, jail, New York, whatever. And with my father, it was never a cakewalk. So we’ll come up to date.

PM: I don’t know if we’re gonna touch more than ten or twenty percent of what’s actually in there, but I think we’ll hit the high notes and watch them bounce.

MP: How is the new Phoenix Theatre?

PM: It has really good acoustics. They’ve reconfigured the stage as a proscenium stage. I think it seats between 100 and 120. They took out the old seats – I think the old capacity was 180-220 – so it’s a comfortable space with a large stage.

MP: And your show is just two nights?

PM: Yeah, but like I said, this is hopefully – knock on wood, fingers crossed, rabbit foot in pocket – something I can take to other theaters throughout the Twin Cities and around the state, and eventually, in a perfect world, around the country. But right now, I’m calling it my off-Broadway show – off Broadway and University.

MP: Are you excited?

PM: Yes, I am, and there are nights when I wake up in a cold sweat. But I feel very confident in certainly the musical aspect of it. That part I’ve been doing for years.

Stowell and I have been trying to figure out how much stuff is reasonable for Metsa to actually memorize. How much RAM space does he have mentally? But this isn’t ‘Hamlet.’ I don’t need to memorize the whole thing.

Primarily, the music’s gonna anchor the production. Jim once quoted – I think it was Wendy Lehr: “Nobody walks out of a theater whistling the dialogue.”