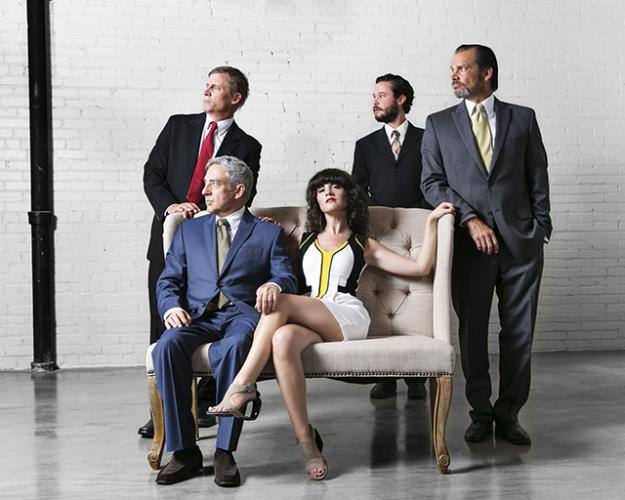 Its first, “Outside Providence,” three one-act plays by Edward Allan Baker, took place in late summer 2012 at the Engine Room, a storefront in downtown Minneapolis. For David Mamet’s “Speed-the-Plow” in early 2013, they moved to the Miller Bag Building on East Hennepin.

Adam Bock’s “The Receptionist” last December had its regional premiere in a recently vacated office at Traffic Zone Center for Visual Art. In May, “The Drunken City,” also by Bock, was presented in the party room of an apartment building in St. Paul.

Where next? The two-story atrium of the Grain Belt Bottling House, a space so big the actors will wear body mics and the audience headsets.

Harold Pinter’s rarely-produced black comedy “The Hothouse” opens there Friday and continues through Jan. 4. It’s D&S’s holiday play for 2014. If two plays can be called a tradition, then its tradition is counter-holiday programming. Last year’s “The Receptionist,” which ran on almost the same schedule, was about professional torturers. Pinter’s play, set in an ambiguous institution – a prison? A psychiatric ward? An asylum? A convalescent home? – has its own dark themes: institutional bureaucracy, sexual and political hierarchy, power, class divisions, abuse. And much of it takes place on Christmas Day.

“I’ve got no qualms with creating an anti-holiday holiday,” Marsh says. “I love darkness. And Pinter sugars the pill; it’s a hilarious play. Almost vaudevillian at times. Then all of a sudden something hard-hitting comes in and you’re like – ‘Oh my God, I’m laughing at that?’ ” If you saw “The Receptionist,” you know how this feels.

Marsh was inspired to start Dark & Stormy in part by Ten Thousand Things, another unconventional theater company. Ten Thousand Things starts each run in prisons, shelters, treatment centers and community centers before settling in at Open Book in a room never meant for plays. “When I saw ‘Othello’ back in 2009, I was blown away. It revolutionized the way I view theater. I could see other audience members. The actors were tripping over my feet. I was like – this is what I want to do. As an actor, I had always done big houses, and I became infatuated with this idea.”

From there evolved a company with a distinct mission and goals: Develop the next generation of theatergoers. (If you’re under 30, you pay less for tickets, which are already affordable.) Give audiences unusual, immediate, exciting and intimate ways to experience theater. And give great actors enticing roles in between gigs at bigger, higher-paying companies.

“We don’t pay a lot,” Marsh says, “but what we do is give people the opportunity to work on projects they wouldn’t normally do. These guys [the “Hothouse” cast] all jumped at the chance to do these roles with each other. I’d get calls from them asking, ‘Do we still have everybody?’ Mark and Bruce and Robert all said they’ve never done anything like this in all their years of theater.

“It’s a hard play in a crazy space, and we’re all out of our comfort zones. It’s hard and scary, but it’s so rewarding, and they are all willing to just do it and walk on the wild side with me. I almost cried.”

Previews start tonight (Wednesday Dec. 10) and continue through Thursday. Opening night (Friday, Dec. 10) is sold out; so is Sunday, Dec. 14. Eleven performances remain. Audience size is limited to 60. All shows begin at 7:30 p.m.; all seats are general admission, and there is no late seating. FMI and tickets ($25/$15).

The Minneapolis Institute of Arts has much to celebrate this holiday season: an $8-million gift from the Duncan and Nivin MacMillan Foundation to endow the position of director and president. The largest endowment gift in MIA’s history for a staff position honors the museum’s upcoming centennial and ensures the vitality of the director’s position in perpetuity.

Nivin MacMillan had special praise for Kaywin Feldman, who has led the MIA since 2008 and will inaugurate the Duncan and Nivin MacMillan Director and President of the Minneapolis Institute of Arts position. “Kaywin Feldman has attracted a talented team,” MacMillan said in a statement. “She is astoundingly creative and strategic about positioning the museum for the 21st century.”

MacMillan joined the museum’s Docent Training program in the late 1970s, taught there for almost ten years, and became a trustee in 1997. She has served on and chaired various committees including the Steering Committee, which raised more than $6 million for the MIA’s 100th birthday year.

The foundation has been a major supporter of the MIA. Earlier gifts have included sponsorship of the exhibitions “The Louvre and the Masterpiece” and “Rembrandt in America,” support for acquisitions including works by Siah Armajani, J.M.W. Turner, and others, the redesign of the African galleries, and a group of 69 watercolors by 19th-century soldier/artist Seth Eastman, originally collected by James J. Hill, one of the MIA’s founders.

Tonight (Wednesday, Dec. 10) at selected movie houses: “Vatican Museums 3D.” The Sistine Chapel really is all that. If you can’t be there in person, second best is sitting in a theater seat with 3D glasses and the director of the Vatican Museums as your guide. Go here, click “Buy Tickets,” and enter your ZIP to find the theater nearest you. If you’re in the Twin Cities, your choices are the Showplace Icon, Eden Prairie 18 and Rosedale 14. 7 p.m.

Opens Thursday at Open Eye Figure Theatre: “The Longest Night.” Before Christmas, before Hanukkah, before much of anything, humans observed the Solstice, the longest, darkest night of the year. With pianist Sonja Thompson, actor and singer Bradley Greenwald celebrates winter, the holiday blues, excess, and the soul’s need for rebirth in an eclectic program of songs (Rodgers and Hart, Leonard Cohen, Bach, Sting, Dar Williams), stories and poems (Margaret Atwood, Joseph Campbell, Ogden Nash). Ages 12 & up. FMI and tickets ($24/$22/$18/pay-as-able). Through Dec. 21.

Saturday at the Grain Belt Bottling House: Midway’s 7th Annual Monster Drawing Rally. Working in three one-hour shifts, more than 80 area artists – including Betsy Ruth Byers, Kate Casanova, Natasha Pestich, Nathan Lewis and Pete Dreissen – will draw live throughout the night. Watch art being made, interact with the artists, and – once the drawings are on the wall, and not before – buy any you like for a flat fee of $35 each. All proceeds benefit Midway Contemporary Art’s programming. Here’s a list of artists, most with links, so you can get a sense of their work. Drawing rounds begin at 6, 7, and 8 p.m. Admission is free. Cash bar and food truck.

Tonight at the Trylon Microcinema: “Jingle Bell Rocks.” Turns out there are Christmas music fanatics – like filmmaker John Waters, Duluth native Alan Sparhawk of Low, and bebopper Bob Dorough – who seek out and collect the rarest and strangest Christmas songs ever recorded. Director Mitchell Kezin talks with them and follows them around in a film that includes live performances and archival footage. Here’s the trailer. We don’t understand why tickets are still available to this Sound Unseen presentation at the Trylon, but as of this morning, they are ($10).

Tonight at the Ordway: “A Christmas Story, the Musical.” You know what Ralphie Parker wants for Christmas: an Official Red Ryder Carbine-Action 200-Shot Range Model Air Rifle. Based on the classic 1983 holiday film and the writings of Jean Shepherd, directed and choreographed by James Rocco and Sharon Halley, this Ordway-produced musical stars Gary Briggle as Shepherd, Billie Wildrick as Mother, Jack Goodman as Ralphie, James Ciccarelle as Randy, Dieter Bierbrauer as the Old Man and Erin Schwab as Miss Shields. We haven’t yet seen this, but we’ve heard only good things about it. FMI and tickets ($36–$120). Through Dec. 28.

Monday, Dec. 22 at the Guthrie: Sounds of Blackness: The Night Before Christmas – A Musical Fantasy. The 36th anniversary performance of this beloved holiday show updates “A Visit from St. Nicholas” and sets it to music ranging from R&B/hip-hop to jazz, blues and gospel. Sounds of Blackness are three-time Grammy winners. FMI and tickets ($39.50/$35/$20).

Please join MinnPost tonight, Dec. 10, for the second event in our MinnPost Social series. MinnPost Social: The Arts – What’s Hot (and Not) will feature MinnPost Artscape writer Pamela Espeland and managing editor Susan Albright. The free event will take place from 5:30 to 7 p.m. at the American Swedish Institute. For details and to register, go here.