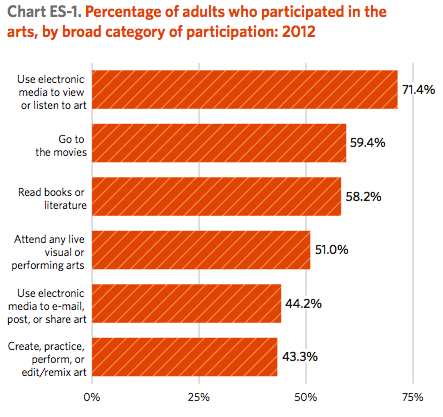 Source: National Endowment for the Arts

Three new reports released Monday by the National Endowment for the Arts have likely been read by arts administrators all over the cities by now. Based in large part on data from 2012, which is recent for government-issued reports, they help us understand why some people attend arts events and others don’t, how people participate in the arts and how the arts translate into dollars.

According to “When Going Gets Tough: Barriers and Motivations Affecting Arts Attendance,” these are among the top reasons Americans attend arts performances and exhibits: to socialize (73 percent), learn new things (64 percent), experience high-quality art (63 percent), support a community organization or event (51 percent), because it’s low-cost or free (41 percent). Retirees go to experience high-quality art; parents of kids under six go to socialize. Those who don’t attend arts events cite these reasons: not enough time (47 percent); costs too much (38 percent); too hard to get there, which includes difficulty due to physical handicap or illness (37 percent); no one to go with (22 percent). Those surveyed were asked, “During the last 12 months, was there a performance or exhibit that you wanted to go to, but did not?” Thirty-one million said yes. 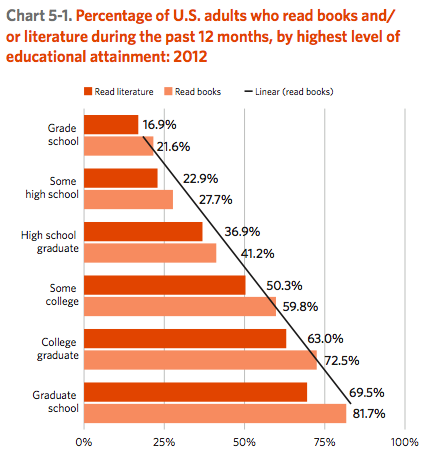 Source: National Endowment for the Arts

“A Decade of Arts Engagement: Findings from the Survey of Public Participation in the Arts” shows that more than half (54 percent) of all American adults attended at least one live music, theater or dance performance in the past year. Big surprise (not): Adults who attended performing arts or visited museums as children were three to four times as likely to go as adults. In our digital age, nearly three-quarters of American adults use electronic media to view or listen to art, and lots use it to create music or visual art. Which includes Instagram photos, so we won’t dwell too long on this.

The Arts and Cultural Production Satellite Account (ACPSA), a partnership between the NEA and the Department of Commerce’s Bureau of Economic Analysis, reports that in 2012, arts and cultural production contributed more than $698 billion to the U.S. economy – more than construction ($588 billion) or transportation and warehousing ($464 billion).

Full reports are available at the links.

The Bell Museum has named its resident artists for 2015-16. Each will work with U of M researchers and the museum’s scientific collections on ways to connect scientific discoveries and the Bell with the public. Chosen from a pool of more than 90 applicants, the upcoming artists-in-residence are Sam Easterson, a St. Paul-based media artist; Diane Willow, a Minneapolis-based multi-modal artist; Sreekishen Nair, a Minneapolis-based visual artist; and Carl Flink, choreographer and artistic director of the Twin Cities-based Black Label Movement. Easterson and Willow will also have the chance to provide input on the design of the new Bell Museum to be built on the U’s St. Paul campus. The Bell has chosen two Showcase Artists for 2015: Minneapolis-based photographer Miranda Brandon and Anoka-based painter Alyssa Baguss. All are part of the Bell Museum’s Resident Artist Research Project, now in its second year and funded by a grant from the McKnight Foundation.

Have you had it with winter? Take a class. Many of the Learning Life classes offered by the U this winter are arts-related. “Mistress of Myself: Three Essential Novels by Jane Austen” starts Jan. 27. “Pablo Picasso: His Life and Art” begins Jan. 29. “Dan Brown Meets Dante: A Descent into Two ‘Infernos,’” which pairs the best-selling author of “The Da Vinci Code” with the first part of “The Divine Comedy,” starts Jan. 29. “Shining Armor: Stories of the Middle Ages” (think King Arthur and Robin Hood) starts Feb. 2. And then there’s “Dogs: The Class,” which covers everything from evolution to behavior to training. That one starts Feb. 17. Classes are taught by professors, generally run for three to four meetings at the Continuing Ed and Conference Center on the St. Paul campus, and cost $125-$160. Learn more, see more classes and sign up here.

Tonight at the History Theatre in St. Paul: A staged reading of “Stewardess,” a new play by Kira Obolensky. This kicks off the History Theatre’s annual RAW STAGES New Works festival, where professional artists direct and perform scripts-in-progress and audiences give feedback. Obolensky is playwright-in-residence at Ten Thousand Things and a Core Writer at the Playwrights’ Center. “Stewardess” is a new play “about the Northwest Airlines stewardess who challenged the status quo and went sky-high with the fight for gender equality in the workplace.” 7 p.m. Tickets here ($15). Better deal: buy a $30 pass to all four RAW STAGES events: tonight, tomorrow, Saturday and Sunday.

Saturday at Open Book in Minneapolis: A Celebration of Allan Kornblum’s Life. A memorial service honoring the founder of Coffee House Press, who died Nov. 23. Karen Tei Yamashita, Andrei Codrescu, and Stu Abraham will speak, along with other authors and members of the literary community. Kent Aldrich is printing a new letterpress piece in Kornblum’s honor, and a display case will highlight Kornblum’s letterpress work over the years. 2 p.m. Free. Here’s Kornblum’s obituary in the New York Times.

Saturday at Crossings at Carnegie in Zumbrota: Accordion-O-Rama. This annual event is a great favorite for those who love the squeezebox. If that doesn’t yet include you, it might once you’ve spent the evening in a vintage Carnegie Library on a quiet street in a small town, listening to Dan “Daddy Squeeze” Newton, Patrick Harison and Denny Malmberg play. Get tickets, fill the tank, pack your emergency kit, make the drive and thank us later. Doors at 7 p.m., music at 7:30. FMI and tickets ($18 advance/$20 door). Here’s a little something about an autumn Accordion-O-Rama in 2010.

Thursday, Feb. 5 at the Continuing Education and Conference Center on the U’s St. Paul campus: Headliners: “The Shifting Tides of Global Terrorism.” Talk about timely. Jarret Brachman began his career as a graduate fellow at the CIA’s Counterterrorist Center, tracking Al-Qaida’s senior leadership. Today he’s an internationally recognized specialist on counterterrorism and violent extremist movements. He’ll describe what has happened since the death of Osama Bin-Laden, and the current state of groups such as al-Qaida and ISIS. 7 p.m. Register here ($15).