Construction is not yet complete and all the seats aren’t in, but on Wednesday — a day short of 30 years after the Ordway first opened — the musicians of the St. Paul Chamber Orchestra played their first notes on the stage of the new Ordway Concert Hall, which was designed and built especially for them.

Wednesday’s event was billed as a rehearsal, but as the first movement of Beethoven’s Fourth Symphony filled the air, it was more than that. It was an affirmation of the SPCO’s value to the community. It was a culmination of a process that began more than 15 years ago, when SPCO President Bruce Coppock decided the SPCO needed a purpose-built, acoustically appropriate home. And it was a testament to the power of the Arts Partnership to raise money.

A collaboration among the Ordway’s four principal residents – the SPCO, the Schubert Club, the Minnesota Opera and the Ordway Center for the Performing Arts – the partnership ran an ambitious capital campaign that netted $83 million. Of that, $42 million went to the hall and the rest to an endowment fund. “Four organizations, boards, and donors working together,” said President Patricia Mitchell. “It’s never been done.”

The rehearsal was also a tantalizing taste of what’s to come: years of great performances in an elegant, intimate room with sound that will take some getting used to, like fine wine or unpolluted air. Designed by architect Tim Carl of HGA (whose recent projects include the Northrop revitalization) and acoustician Paul Scarbrough of Akustiks (whose next project is Lincoln Center’s Avery Fisher Hall), the new hall was built not only for chamber music, but for silence.

All you hear is music

There are no blowers, motors or fans, and a 22-inch-thick wall along West 5th Street keeps out traffic noise. So if you sit still and listen, all you hear is music in a space where every surface, shape and angle was designed to enhance it. The undulating ceiling of mahogany-stained oak dowels, the sculptural panels on the walls, even the curves beneath the balconies have specific acoustical purposes, along with looking very fine. (The rolling waves of the Concert Hall’s ceiling could easily become as iconic as Orchestra Hall’s cubes.) 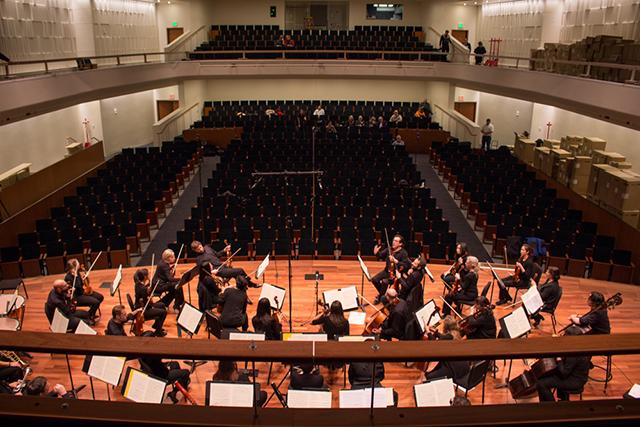 MinnPost photo by John Whiting
Looking down from the choral loft behind the stage.

As the SPCO played on Wednesday, we felt fully enveloped by music, and also as if we could reach up and pluck individual notes out of the air. But what do we know? We asked an expert what he thought of the sound.

“It met and exceeded all of my expectations,” said violinist Kyu-Young Kim, the SPCO’s principal second violin and senior director of artistic planning. “It’s vibrant, and there’s a sheen to the sound. It’s clear, it feels intimate, and there’s an incredible range of dynamics you can do. You can play softer. If you can play softer, that means you have a bigger range, more to work with, more expressive possibilities.

“It’s all about what the audience can experience, and making them feel they’re right there with you, rather than in the distance.”

The farthest away you can possibly be from the musicians is 95 feet. The new hall, which has 1,100 seats, occupies much the same footprint as the former McKnight Theater, which seated 300. The roof was raised 30 feet to allow for two balconies. The building was stretched 10 feet to the north and 20 feet to the east. These are relatively small changes that somehow made room for three times as many people, yet the hall doesn’t feel at all crowded.

With the seats up, you can walk easily along the rows. Seated beneath either balcony, you’re not the filling in a sandwich. There’s an openness and spaciousness, but it’s also kind of cozy, a living room built for music. High up in the last row of the second balcony, which has a steep rake, you’re still within that magical 100 feet of the stage, with fantastic sightlines and probably the best sound in the house. This may be a hall where you can sit anywhere.

“It’s a risky business to build a concert hall,” Coppock said afterward, looking both pleased and relieved, “and a huge community triumph.” Starting March 1, when “Rock the Ordway” launches 22 days of opening nights, you’ll have plenty of chances to see and hear the new hall for yourself. 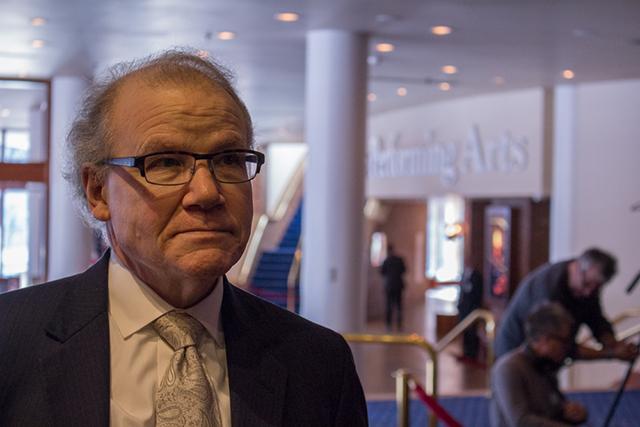 Between now and then, the SPCO will rehearse there many times. “We have the luxury of a long tuning process,” Kim said. “This gives us a chance to really hone the sound. When you have such a small group, the hall becomes another instrument.”