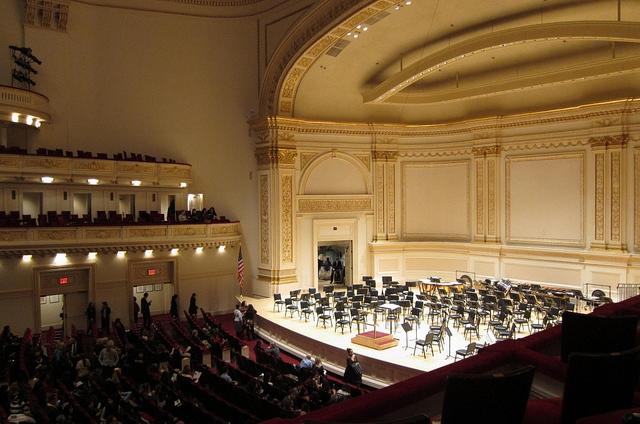 CC/Flickr/Bosc d’Anjou
The Minnesota Orchestra will take the stage at Carnegie Hall on March 3, 2016.

How do you get to Carnegie Hall? Be a member of the Minnesota Orchestra, and be patient. The Orchestra announced yesterday that Osmo Vänskä and the musicians will play a Sibelius concert there on March 3, 2016. The orchestra will perform the First and Third Sibelius symphonies and his Violin Concerto, with guest soloist Hilary Hahn. The orchestra won the Grammy for its recording of symphonies 1 and 4; they will record 3, 6 and 7 for the BIS label later this year.

One of the lowest moments of the 16-month Minnesota Orchestra lockout was the cancellation of two prestigious Carnegie Hall concerts originally scheduled for November 2013. Vänskä had said that if they were canceled, he would quit, and he did. He was rehired as music director in April 2014.

After 13 years with the Loft Literary Center – five years on the board and eight as executive director – Jocelyn Hale will step down in August 2015. “I’ve picked 2015 for this transition because we are so well positioned for the future,” Hale said in a statement. Board Chair John Schenk had high praise for Hale’s work. “She began her tenure as the economy was collapsing and managed to keep the Loft moving forward, including launching online learning, completing an endowment drive, expanding class offerings and outreach programs, and taking a leadership role in Open Book’s management and sustainability.”

Incorporated in 1975, the Loft is the nation’s largest literary center and a touchstone of our state’s arts scene. The board will open a national search on Jan. 30. A leadership transition celebration will take place during the Loft’s 40th anniversary on Aug. 22. Thankfully, Hale will still be at the helm when thousands of writers, editors and publishers arrive in Minneapolis for the AWP (Association of Writers and Writing Programs) convention in April.

Two reports released this month give us different but related news about the arts in Minneapolis and Minnesota as a whole. Locally, a 2014 update to the Creative Vitality Index, a tool that measures annual changes in the economic vitality of the arts and arts activities in a specific geographic or political region, shows that the Minneapolis-St. Paul metro area arts sector has moved from sixth to fifth strongest in the nation, when compared to other top metropolitan areas. We rank behind (in this order) Washington, D.C.; Los Angeles; New York; and Boston. In 2013, the creative sector contributed $831 million to the Minneapolis economy, up 13 percent from 2011. Retail sales in the creative industries are nearly tied with retail sales in the sports sector. (So where’s our stadium?) Here’s the update. CVI data is being used to develop the Creative City Road Map, Minneapolis’s next arts and culture plan.

The National Center for Arts Research (NCAR) at Southern Methodist University published its first annual Arts Vibrancy Index, ranking more than 900 communities across the country by level of supply, demand, and government support for arts and culture on a per capita basis. Minneapolis-St. Paul-Bloomington is #6 on a list of the top 20 arts vibrant cities with populations over 1 million. Again, No. 1 is Washington-Arlington-Alexandria, followed by Nashville-Davidson-Murfreesboro-Franklin, New York-Jersey City-White Plains, Boston, and San Francisco-Redwood City-South San Francisco. We’re 23rd in arts providers, 11th in arts dollars, and 5th in government support – but first in state arts dollars. We’re cited in the Index for our “vibrant literary and publishing scene, strong theaters, foundations and support for individual artists, a great orchestra as well as support for Native American voices … The theatre sector ranks #1 in the country in Arts Dollars per capita and the symphony sector #5 on this measure.” Check the Arts Vibrancy of your county on NCAR’s Heat Map. Here’s even more information, if you want to follow this further and learn how and why NCAR got its start.

Tonight at Orchestra Hall in Minneapolis: “Symphony in 60.” Would you go to a Minnesota Orchestra concert on a school night? What if it’s just an hour long? That’s the idea behind one of the orchestra’s new series, which launches tonight with selections from Bernstein’s “West Side Story” and Prokofiev’s “Romeo and Juliet.” Sixty minutes and you’re on your way home. Osmo Vänskä leads the band. 8 p.m. All tickets $29.

Tonight through Saturday at the Walker in Minneapolis: Lucidity Suitcase Intercontinental + Wilhelm Bros. & Co: “RED-EYE to Havre de Grace.” Let’s break this down. Lucidity Suitcase Intercontinental = a theater collective led by Thaddeus Phillips that uses improvisation, intuition, maps and Action Design to make original plays. Action Design = the idea that theatrical design should move with stage action, and the set is more than “just a dead space to hold the actors.” Wilhelm Bros. & Co. = theater artist Jeremy Wilhelm and composer/multi-instrumentalist David Wilhelm, real-life brothers and collaborators based in Minneapolis. “RED-EYE to Havre de Grace” = their “action opera” about the circumstances surrounding the final days of Edgar Allen Poe. The New York Times called it “exquisite” and “among the most original musical theater works I’ve seen in years.” This is the closing event in the Out There series. FMI and tickets ($20/$25).

Saturday at Pillsbury House Theatre in Minneapolis: Livestream of a concert by Pharoah Sanders. As the great saxophonist who played with Sun Ra and John Coltrane performs live at Dizzy’s Club Coca-Cola in New York, you can watch in HD at Pillsbury House and listen through their sound system. Pillsbury House recently became part of Jazz at Lincoln Center’s Micro-Concert Network, which is a bonus for jazz fans here. With William Henderson on piano, Nat Reeves on bass and Joe Farnsworth on drums. 8:30 p.m. Free. Call 612-825-0459 or email info@pillsburyhousetheatre.org to reserve.

Ohhhh myyyy! It seems all you have to do is whisper “George Takei” for your event to be successful. When MPR announced the spring season of “Wits” last week, there it was: March 5 at the Guthrie: George Takei with Serengeti. It sold out. The good news is, a second show has been added on Friday, March 6. Takei, who first became famous as Sulu in the original “Star Trek” television series, has gone on to even greater fame as an author, LGBT activist and social media superstar. For tickets ($35-$45), call the Guthrie (612-377-2224) or buy online.