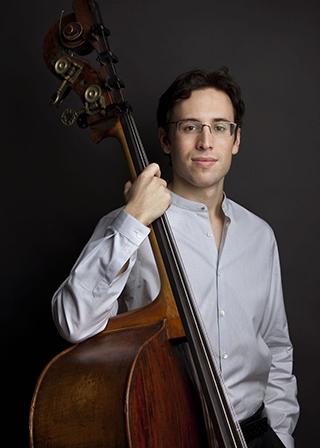 Zachary Cohen has been named the Saint Paul Chamber Orchestra’s new principal bass, the orchestra announced Thursday. Cohen had been serving a yearlong appointment as the SPCO’s acting principal bass, and a lot of people were hoping he would stay on, based on what we heard and overheard. We became Cohen fans after seeing him perform with violinist and SPCO artistic partner Patricia Kopatchinskaja and her parents in November. They were so incandescent that Cohen could have faded into the background. He emphatically did not.

Cohen was on leave from the Milwaukee Symphony, where he was hired as principal bass in his senior year at Juilliard at the age of 22. (It’s a quirk of the orchestra world: If you have a full-time position, you can take a leave to play with another orchestra. Then, if you don’t like them or the other way around, you can return to your old job.) He is also principal bass of the chamber orchestra The Knights and has recorded two albums with them on Sony Classical.

Cohen was chosen by an audition committee made up of SPCO musicians. “Zach brings such joy and enthusiasm to his music making and the effect on the other players in the SPCO is palpable,” principal second violinist and senior director of artistic planning Kyu-Young Kim said in a statement. The SPCO’s previous principal bass, Christopher Brown, retired in 2013 after 34 years with the orchestra.

Did you stop by the Walker’s Open Field last June 26 and put your hands together? Then you’re officially part of a Guinness World Record. Author and poet Dustin Luke Nelson led over two hours of unbroken applause, breaking the previous world record of 90 minutes. People came and went, clapped and cheered. It was conceptual, it was fun, it did no harm and made people feel good. Here’s a time-lapse video.

Tickets are on sale at 10 a.m. today (Friday, Jan. 23) for “An Evening with Diana Krall” at the Orpheum on Friday, Aug. 7. Winner of multiple Grammys, Krall will showcase her new album, “Wallflower,” out on Verve in February. Known primarily as a jazz vocalist and pianist, she is, like many other artists, broadening her musical scope and her audience. In “Wallflower,” she interprets pop classics by the Mamas and Papas, the Eagles, and Bob Dylan, songs by Crowded House and a new piece by Sir Paul McCartney. One of the tracks is “California Dreaming,” and we can almost hear it now, coolness tinged with melancholy. Krall is a terrific performer; even her big shows are intimate. FMI and tickets ($61.50-$76.50).

If you’re a Laura Ingalls Wilder fan, you’ve probably heard that her autobiography, “Pioneer Girl,” was published last fall by the South Dakota State Historical Society Press. And you’ve probably had a hard time finding it; the initial printing of 15,000 sold out immediately. Transcribed from Wilder’s handwritten copy, with hundreds of detailed notes and annotations by editor Pamela Smith Hill (also Wilder’s biographer), it’s a runaway hit for the small academic press. It’s also a tougher, rougher, grittier look at life on the prairie than the “Little House” books. MPR’s Jon Collins reports that more copies are on the way. Meanwhile, you can learn more about it here.

Minneapolis St. Paul International Film Festival regulars already know this, but Early Bird discount passes go on sale Monday, Jan. 26. If you plan to see a lot of movies, you might as well save 15 percent. This year’s Film Fest runs April 9-25.

If you plan to go to St. Paul on Sunday, be aware that about 10,000 events are taking place that day. Visit St. Paul has posted a helpful page of information about free rides, parking, and alternate routes.

Tonight (Friday, Jan. 23) through Sunday at Open Eye Figure Theatre in Minneapolis: Loudmouth Collective: “A Bright New Boise.” We’d see this if we could; it’s getting great reviews (in the Strib, Aisle Say and other places). Set in a Hobby Lobby store in Idaho, Samuel D. Hunter’s play won the 2011 OBIE for Playwriting. Hunter also wrote “The Whale,” recently produced by Walking Shadow at Mixed Blood. FMI and tickets ($15/$10 with Fringe button). Ends Sunday.

Saturday at Magers & Quinn in Minneapolis: National Readathon Day Marathon “Beowulf” Reading. The Old English epic poem goes live at an event that celebrates books, reading, and literacy. New this year, National Readathon Day asks book lovers across America to pledge to read for four hours starting at noon. (Curl up and just do it!) It’s also a fundraiser for the National Book Foundation. At Magers & Quinn, the reading starts at noon and ends when it ends. No worries about having to read Old English; M&Q will provide copies of Seamus Heaney’s magnificent translation. Sign up for your time slot(s) here.

Saturday at Bedlam Lowertown in St. Paul: Minnesota Playlist.com’s first Winter Bash. A celebration of our performing arts community and Alan Berks’ theater website, recently relaunched and increasingly essential reading. With music by Annie and the Bang Bang and Hipshaker. Doors at 7 p.m., prize giveaways at 9, music at 9:30. $5 cover at the door. Register here.

Saturday at the Fitzgerald in St. Paul: Nellie McKay. The one-of-a-kind singer/songwriter is a guest on Saturday’s “A Prairie Home Companion.” Post-broadcast, she’ll return to the stage for something APHC is calling “January Jump Start.” As Garrison Keillor says, “Why end the evening when it’s just getting good?” Keillor will host and the prodigiously talented McKay will be her irresistible, unpredictable self. 8:30 p.m. Tickets here ($10/$15/$25).

Saturday and Sunday at the Roy Wilkins in St. Paul: Saintly City Cat Show. The 39th Annual Championship and Household Pet Cat Show is the place to see and admire more than 200 cats, all adorable. 9 a.m. – 5 p.m. Saturday, 9 a.m. – 4 p.m. Sunday. The 2015 Queen and King Cats will be caped and crowned on Sunday afternoon. $4 adults, $3 children and seniors at the door.

Monday at Penumbra in St. Paul: #BlackPoetsSpeakOut: Twin Cities. What began as a hashtag on Twitter, a way for artists to respond to the deaths of unarmed black men like 18-year-old Michael Brown, has become a national movement. Organized by five poets from Cave Canem, the prestigious organization for African American poets founded in 1996, it spread to Facebook, Tumblr and YouTube, and to live readings across the U.S. Poets preface their readings with these words: “I am a black poet who will not remain silent while this nation murders black people. I have a right to be angry.” Performers at Penumbra will include E.G. Bailey, Sha Cage, James Craven, Mary Moore Easter, Khary Jackson, Andrea Jenkins, Tish Jones, Danez Smith, host Maya Washington, James Williams and others, with ASL interpreters. Here’s more about #BlackPoetsSpeakOut. 7:30 p.m. Free.

Save the date, but reserve right now

February 14 at the Bell Museum in Minneapolis: “Across the Universe: A Valentine’s Day Picnic.” Choose a diorama (many are already sold out), bring your own picnic, and the Bell will provide dessert, drinks, ambiance, a tour of its “Eyes on the Universe” exhibition, an ExploraDome Theater planetarium show, and parking. 6 p.m. FMI and tickets ($15 per person, diorama reservations $40-$70). Don’t waste a minute if you want to do this, and if it’s already too late, it’s because we wrote this yesterday.