The first thing you notice is how small she is. The painting itself is a petite 15″ wide, 18″ high. Then you see the blue of her jacket. Then the light: bright near the unseen window, softening behind her. And now you can settle in for a long, luscious look at the MIA’s famous visitor, Johannes Vermeer’s “Woman Reading a Letter,” a 17th-century treasure on loan from Amsterdam’s Rijksmuseum.

A gift to us as part of the museum’s 2015 centennial celebration, she’s on view in the Cargill Gallery on the main level, off the lobby, free of charge through May 3. One of only 34 recognized Vermeers in the world, this is the first of three great paintings we’ll see this year as part of the MIA’s “Masterpiece in Focus” series. The next two will arrive in June and September.

We spoke with Patrick Noon, the MIA’s Patrick and Aimee Butler Chair of Paintings, about “Woman Reading a Letter,” how she came to be in Minnesota, what to look for and more.

MinnPost: What makes a Vermeer a Vermeer? 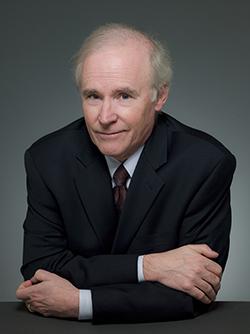 Courtesy of the MIA
Patrick Noon

Patrick Noon: The extraordinary acuity of his vision, and his ability to capture quite faithfully and accurately the effects of light and color, and the effects of light on color. These are the works of a virtuoso. It’s extraordinary when you look at his paintings how beautifully they’re painted and how subtle they are, and how true they are to nature. There’s nothing artificial about his vision.

“Woman Reading a Letter” is a symphony in blue. It’s amazing what [Vermeer] does with blue, how he keys off the rich color of her night coat. The scene is early morning, and she still hasn’t dressed for the day. Cool blue morning light – summer light – permeates the whole atmosphere, right down to the blue in the walls. It’s very subtle but beautifully rendered, and very accurately rendered.

That’s what impresses people most with Vermeer. There’s always talk about his use of mechanical aids, and David Hockney made a big deal out of that – whether he used a camera lucida or camera obscura. He probably did. I’m sure a lot of artists did, but that doesn’t account for the skill with which he paints these pictures, and his particular vision.

PN: I think it’s right near the top in terms of fetching and memorable images, but there are so many interesting Vermeers. This one is interesting because of its enigmatic character. With “The Astronomer” [part of the MIA’s “The Louvre and the Masterpiece” show in 2009], you know what he’s doing. “Girl with a Pearl Earring” is basically a model with a pearl earring that became famous because of [Tracy Chevalier’s novel and the movie]. “View of Delft” is a fantastic picture, but you’ll never see that. It’s rarely around. I would say “Woman Reading a Letter” is one of the better pictures by Vermeer for me as a Vermeer.

MP: Do you think we’re supposed to look at it and wonder if she’s getting good news or bad news? Is there a story in the painting?

PN: There could be, but what is it? You can speculate indefinitely. She seems to be just carefully reading a letter. She’s not, like, fainting … . Everyone wants to read something into it, but I think, like most of [Vermeer’s] pictures, that this painting is not really a narrative. It’s just about painting.

MP: How did “Woman Reading a Letter” come to be here in Minneapolis?

PN: For our 100th anniversary, we have a whole battery of surprises we’re going to be rolling out over the course of the year. We wanted to indicate the stature of our organization internationally in some fashion, and one way to do that was to solicit from some of our more important colleagues abroad a masterpiece from their collection, to help us celebrate this anniversary and acknowledge the importance of the MIA in this international community: our collections, our programs and our relationships with other colleagues and museums. So this was an idea that came to us several years ago and we pursued it.

There’s a certain amount of quid pro quo in all of this. We lend major works to the museums that are lending to us. In this instance, early next month the “Late Rembrandt” show opens at the Rijksmuseum.

MP: And that’s why our “Lucretia” is not currently on display.

PN: We loaned “Lucretia” to the show because it’s a fantastic show, and she’s one of the most important pictures in the show, quite frankly. It would have been a real shame if we didn’t. We usually don’t lend that picture at all, ever. In my 17 years here, it has never gone out. In fact, it never went out before I got here, except for one show back in the ’80s at the National Gallery in Washington. Lending to that exhibition certainly helped in our negotiations with the Rijksmuseum.

MP: During your negotiations, did you ask specifically for “Woman Reading a Letter”?

PN: Yes. They have four Vermeers. This, I think, is the most important, and I thought it was probably the one most people would think of. This one is just very special.

MP: How did it get here? When a painting like this one travels, does it go by sea or by air? Does it travel in secret? Does someone travel with it?

PN: You don’t lend anything without accompanying it. We don’t, anyway. Some museums don’t insist on a courier. Most of them do, certainly for something like this. You would expect a courier to go with the picture and stay with it every step of the way. You also have shipping agents who are responsible for making sure everything is set up for this thing to be transported …

It can go by air, it can go by surface. It doesn’t necessarily have to go by sea. That’s such a long trip. I think if anything went by sea, it’d probably be something too big to fit into a cargo plane … For the 1964 World’s Fair, they shipped Michelangelo’s “Pieta” from the Vatican by boat because it was so fragile, so large and so heavy that it had to go by ocean liner. But I don’t know that one would be doing that again.

MP: Help us to see “Woman Reading a Letter” more in depth. What should we look for and be sure not to miss?

PN: She’s standing in front of a map of the Netherlands. Vermeer includes maps in a lot of his pictures, but that particular map might suggest that she’s married to someone who’s in the business of trade, or it could just be an emblem identifying her nationality. It’s hard to know, but it’s very beautifully rendered and it makes a perfect backdrop for her head.

From the bottom of the map all the way down to the bottom of her jacket, at that very edge, there’s an extremely thin white line. That little line creates the sense of volume and roundness that you see in the figure. The volumetric quality of his figures is just so extraordinary, and the way he models with color.

And the variations in light, the gradations of blue in the light in the wall behind her. You go from this very bright morning light coming in through the window that she’s facing, and then it very subtly and gradually fades into a sort of gray-blue behind her. It’s a remarkable command of color and light in painting. Just extraordinary.

PN: Yes, and there are all sorts of flaws in the wall that are picked out because of the raking light. It’s that kind of observation – of these important but very minor optical details – that a narrative painter, who is only interested in narration, would care less about.

The difference between a great painter and an illustrator is essentially that. The great painter is as concerned about the execution of the picture and its accuracy, and chooses color and the expressive nature of the light and color as the story. Many artists just tell the story, and that’s fine, but in terms of painting and the great skill required to be a great master painter, it just doesn’t hold up.

This, on the other hand, is an extraordinary piece of painting. When you look at it, you marvel at how he applied the paint and how it works. What’s marvelous about Vermeer and these kinds of painters – Rembrandt [is another] – is they’re able to capture a tremendous amount of naturalistic detail, but in a very broad fashion. The painting has a sense of breadth that you don’t often get, and yet at the same time all of these little details that one sees in nature are transcribed beautifully. 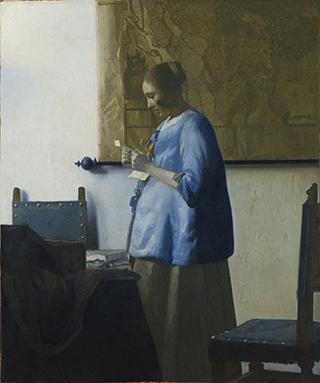 MP: Are we looking at a prosperous household?

PN: I should think so. Definitely. Absolutely. There’s a string of pearls on the table that she’s about to put on, with a ribbon. The furnishings are quite nice. The house is upper middle class.

MP: Do you think she’s with child?

PN: A lot of people would like to think that, and they’d like to tie that into the letter … The dress of the period, the costumes that people wore, could flare out like that, although she’s not dressed to go out, so she’s not wearing all the undergarments that would cause that. There might be some argument that she is in fact pregnant, but it’s impossible to say for certain.

MP: It’s a product of our times to want to attach a story to everything. Even the MIA’s docents encourage that with questions like, “What do you think is happening in this painting?” It’s a way to engage people on a personal level, and it’s kind of irresistible.

PN: We do want to know, and it’s hard to know. First of all, this was the 17th century, and second, we know very little about Vermeer. We don’t have the kind of accurate records that we have for some other artists of the period, like Rembrandt, and the passage of time has obliterated a lot of the information about him … One can’t say that Vermeer was an art-for-art’s-sake painter. The concept didn’t exist. That doesn’t mean he was necessarily an illustrator. He was painting these subjects for somebody, and if they were for himself alone, then he was probably painting them for the challenge of painting them, and for the enjoyment of painting them. These are things that we can’t really speculate very far on because of the distance.

The best paintings are going to engage you in some fashion, and sometimes it’s a purely technical attraction. Sometimes it’s a subject like this, and [the artist is] forcing you to imagine what it’s all about. This strategy has been important for artists through the centuries. So yes, you’re meant to think about it, but you’re also, in Vermeer’s case, meant to admire the sheer virtuosity of his paintings and his technique and his style.

MP: We’re promised two more mysterious masterpieces for this year. Can you give us the tiniest hint about each one?

PN: No, I can’t. I’m not allowed to. They would kill me. You can’t imagine how secretive they want this all to be. We’re not even telling the trustees what’s coming.

Related: On Thursday, April 9, at 6:30 p.m., Walter Liedtke, curator of European Paintings at the Metropolitan Museum of Art in New York and author of “Vermeer: The Complete Paintings,” will give a lecture on “Vermeer’s Women.” FMI and reservations ($10/$5 MIA members). On Sunday, April 19 at 2 p.m., Lawrence Weschler, director emeritus of the New York Institute for the Humanities at NYU and author of “Vermeer in Bosnia,” will lecture on “Posers: Marvel, Majesty and Sovereignty among the Habsburgs and in Vermeer.” FMI and reservations ($10/$5). “The Habsburgs” opens Feb. 15.