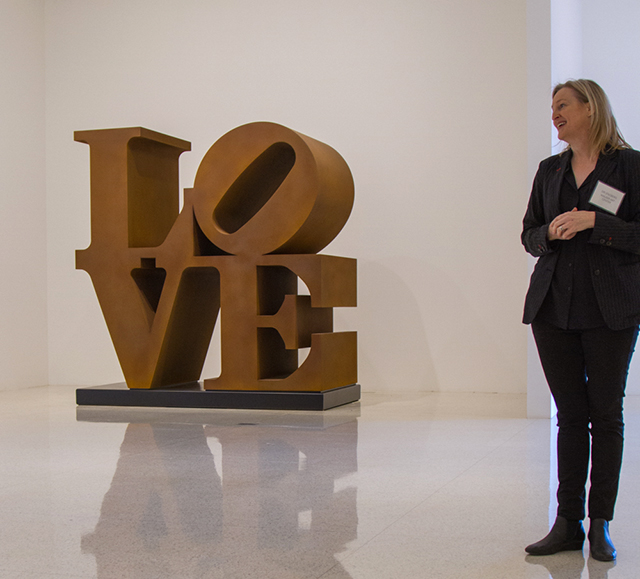 A Robert Indiana “LOVE” sculpture. A Noguchi bronze. Drawings by Claes Oldenberg, Andy Warhol, David Hockney and Robert Rauschenberg. A Chuck Close self-portrait in tapestry. A life-size sculpture by George Segal. If only we all got such nice gifts on our birthdays. It seems the secret lies in asking, and in knowing whom to ask.

Three years ago, nearing its 75th anniversary, the Walker undertook a major initiative to solicit 75 gifts from private and corporate donors. More than 250 works from nearly 100 donors – paintings, sculptures, drawings (lots of drawings), photographs, videos and prints – came in as gifts or promised gifts. Fifty new artists have been added to the Walker’s collection, which has grown by more than two percent.

A exhibition that opens today, “75 Gifts for 75 Years,” features more than 100 items, most of which have never been on view here, dating from the 1950s forward. The collection is broader now, and deeper. Historical gaps have been filled, bridges have been built, younger artists have been introduced and Minnesota artists are well-represented.

A few gifts arrived as recently as last week, and some required special treatment or installation. The tempered glass conceptual piece “On Center, On Edge: Shatter Scatter” by artist Barry Le Va had to be smashed with a six-pound sledgehammer, following instructions provided by the artist. (Here’s the video.) For Erwin Wurm’s “Truck (Baltic),” in which the bed of a full-size delivery truck appears to back up a wall, the gallery wall was excavated to make room for supports.

Together with “Art at the Center: 75 Years of Walker Collections,” the curator-focused exhibition that opened in October, “75 Gifts for 75 Years” tells us where the Walker has been, where it’s going (sort of), and where it is at this particular trembling moment, when the next big thing is taking shape in someone’s studio somewhere. The two shows are a pair of Walker selfies. If you want to know what one of our major arts organizations is about, how it thinks and what it values, see them both.

How about this weekend? Starting tonight (Thursday, Feb. 5), the Walker is throwing a four-day-long celebration of its 75th called “Winter Walkerland.” As of 5 p.m., gallery admission is free through Sunday, “75 Gifts” is open, and there’s plenty to do and see inside and out: free ice-skating, a cocoa bar, family art-making, a Vodka Ice Bar (tonight only), spotlight talks by Walker tour guides. FMI.

The Minnesota Orchestra has a new principal bass, the orchestra announced yesterday. Montana native Kristen Bruya won the position after an extensive audition process. She most recently served as assistant principal bass with the Toronto Symphony and starts here this week, performing in concerts tonight and tomorrow. The orchestra hasn’t had a principal bass since 2007, when Peter Lloyd resigned after 21 years. Section members Matthew Frischman and Kathryn Nettlemen had been serving as acting co-principals.

Cantus, our acclaimed men’s vocal ensemble, has received a $9,000 grant from the Ann Stookey Fund for New Music to develop a new choral work by Pulitzer Prize-winning composer David Lang on the topic of love. The 4-6 minute work will become part of its 2015-16 touring program, “The Four Loves.” Cantus also hopes to commission songs by Ysaye Barnwell (formerly of Sweet Honey in the Rock), Roger Treece and Joseph Gregario and has launched a Kickstarter campaign.

If you’re a St. Paul resident, you use your public libraries, and you have somehow, through no fault of your own, racked up library fines, there’s no need to feel guilty or avoid the library altogether. Hold your head up high, march right in, check in with the staff, and start reading. For every 15 minutes you read, they’ll take $1 off your fines. Sorry, collection fees and book/DVD rental fees are not eligible. This beneficence is part of Winter Jackets, a month-long celebration of reading for adults. FMI.

Goodbye BTAC, hello Artistry. The Bloomington Theatre and Art Center (BTAC), formed in 2009 with the merger of the Bloomington Civic Theatre and the Bloomington Art Center, will have a new name and logo as of July 1. A nonprofit producing arts organization based in the Bloomington Center for the Arts, BTAC has been growing its audience, broadening its reach, and attracting new funding, including a 2013 NEA “Our Town” grant. The simpler, one-word, non-acronymic name, Artistry, and sleeker logo, developed with Minneapolis-based PadillaCRT, are seen as key to continued growth. We’re not sure “Artistry” says “we do theater, exhibitions and arts education,” but it has a nice ring to it. We writers will need tips on how to use it. “The new play at Artistry”? “Artistry’s new play at the Bloomington Center for the Arts”?

Tonight (Thursday, Feb. 5) and Saturday at the Northrup King Building in Minneapolis: SweetArt Salon des Refusés. Tonight’s First Thursday (which continues on Saturday) is something new: a show of fine-art works from throughout the Northeast Minneapolis Arts District, juried by audience participants including you. Three winning artists will receive “People’s Choice” awards of $600 (first place), $400 (second), and $200 (third). Jurors are entered into a drawing for one of six $50 certificates to local restaurants. 6-9 p.m. tonight, noon-6 p.m. Saturday. Free.

Friday and Saturday at the Lab Theater in Minneapolis: MN Opera/Project Opera Presents Music of Mozart. Project Opera is Minnesota Opera’s youth training program for talented young singers. This program sounds like a lot of fun: arias, duets, and ensembles from “The Marriage of Figaro,” “Cosi fan tutte” and “The Magic Flute,” reimagined as scenes from a high-school dance, complete with fights in the bathroom. Performed by an all-teen cast and orchestra. 7 p.m. Friday, 1 p.m. and 4 p.m. Saturday. FMI and tickets ($15/$5).

Sunday at MacPhail in Minneapolis: The Bakken Trio: “The Seeds of What’s to Come: Young Geniuses of the Late Romantic Era.” A musical aperitif for “The Habsburgs” exhibit that opens Feb. 15 at the MIA, this concert features music of the Habsburg era including Mahler’s Piano Quartet, Strauss’ Violin Sonata, and Schoenberg’s “Transfigured Night.” 4 p.m. FMI and tickets ($25) or call 612-374-3175.

Wednesday, March 9 at the Dakota in Minneapolis: David Sanchez Quartet. The Grammy-winning tenor saxophonist has a lush, dark tone and an effortless command of Latin rhythms and modern jazz. He rarely comes through the Twin Cities and he’s only here one night. 7 and 9 p.m. FMI and tickets ($30/$20).

Correction: An earlier version of this article had an incorrect amount for the Cantus grant.