It’s a big year for birthdays and anniversaries: the MIA’s 100th, the Walker’s 75th, the Minnesota Center for Book Arts’ 30th, The Current’s 10th. And now the Children’s Theatre Company’s 50th.

Can it really be 50 years since John Clark Donahue moved the former Moppet Players into the Minneapolis Institute of Arts? That was 1965; by the 1970s, CTC was winning national awards and grants. In 1974, it had its own $9.4 million theater, followed by the $24 million, Michael Graves-designed expansion that opened in October 2005.

CTC has created more than 200 new plays for young audiences, adding immeasurably to the repertoire. Its Theatre Arts Training (TAT) and Performing Apprentice (PA) programs have taught countless students to act and put many on stage, developing the next generation of performers. And it’s one of the few professional regional theaters to have a full-time acting company: Gerald Drake, Dean Holt, Autumn Ness, Reed Sigmund and Traci Allen Shannon, all members of Actors Equity.

Today CTC is recognized as America’s flagship theater for multigenerational audiences. It’s no stretch to link the Twin Cities’ boisterous and thriving theater community to the presence and excellence of CTC. As Artistic Director Peter Brosius told “MN Original,” in 2012, “We’re making theater for the most important audience in the world – for young people and families. If we inspire those young people with the power of theater and its beauty, you’ve created a lifelong curiosity and hunger for the arts.”

CTC’s 50th anniversary season, announced this week, has something for everyone. The seven productions include five premieres, starting with “Akeelah and the Bee” (Sept. 1-Oct. 11). Broadway director Charles Randolph-Wright will make his CTC debut in the first theatrical adaptation of the critically acclaimed film. The premiere of “The Jungle Book” (Sept. 29-Dec. 6), based on the book by Rudyard Kipling, will be adapted and directed by British director Greg Banks, whose long relationship with CTC includes “Pinocchio,” “Robin Hood,” “Huck Finn,” and “Romeo and Juliet.”

The holidays bring munchkins and monkeys: “The Wizard of Oz” (Nov. 3-Jan. 3, 2016), based on the motion picture, adapted for the Royal Shakespeare Company, directed by Brosius. Then “The Frog Bride” (Jan. 12-Feb. 28), written, conceived and performed by storyteller David Gonzalez, with an original jazz-funk score. A third premiere, “The Snowy Day and Other Stories by Ezra Jack Keats” (Feb. 9-March 20), will be told in color, shadow and puppetry design by Fabrizio Montecchi. The premiere of “Animal Dance” (March 22-May 1), a play for preschoolers, will feature choreographer and performance artist Ann Carlson.

Wrapping up the season, the premiere of “Diary of a Wimpy Kid, the Musical” (April 12-June 5) brings Jeff Kinney’s bestselling, award-winning books to life. Kinney is collaborating with CTC on the musical stage adaptation. Subscriptions are on sale now. Single tickets go on sale July 7.

At the History Center last Thursday, history was made. Thanks to a collaboration between the Minnesota Humanities Center and the Minnesota Historical Society Press, we now have a splendid new anthology of African-American writing from Minnesota, a 286-page book called “Blues Vision,” filled with prose and poetry, its cover a work of art by Ta-coumba Aiken.

That we haven’t had such an anthology before 2015 is something to think about frankly, without excuses; that we have it now is something to celebrate. In his opening remarks, Humanities Center head David O’Fallon expressed his passionate desire to put this book not only into classrooms, but into hearts; to make it heard as well as seen. And he noted that this is the sort of thing Legacy funding was meant for.

After an introduction by editor Alexs Pate, we heard readings by Pate, Tish Jones, Philip Bryant, Sha Cage, E.G. Bailey, Taiyon Coleman, special guest Jeannie Piekos (who read a poem by Roy McBride), and J. Otis Powell‽, who was also a co-editor of the book. There were cheers and calls of recognition from the crowd, which included elders and squirmy children. Bailey, who emigrated from Liberia to the United States at age 10, then taught himself English by reading 200 books a year, expressed his happiness at being published in such good company, then mentioned he’d like to have his own book one day. We’d like to see that, too.

If you haven’t already, it’s time to bolt down those Valentine’s Day plans. In addition to Maud Hixson and Rick Carlson’s “Bad for Each Other: A Bent Valentine” at Icehouse, here are six things we like:

2) The Schubert Club at the new Ordway Concert Hall. A program appropriately called “Love Songs,” featuring vocal soloists of the Chamber Music Society of Lincoln Center and music by Brahms, Schubert, Schumann and Berg. The concert doesn’t happen until Friday, March 20, but tickets are very good V-Day gift, with the added frisson of anticipation. And it takes place in the gorgeous new Concert Hall. 7:30 p.m. FMI and tickets ($26/$41).

3) “WonderWomen” at the U’s Katherine E. Nash Gallery. This colorful exhibition of work by women artists closes too soon but goes out with a bang on V-Day. A public reception from 7-9 p.m. is followed by a fashion show at 9. The Minnesota RollerGirls will make an appearance and Girl Scout cookies will be served. Free. FMI.

4) Les Délices: Portrait of Love at the Baroque Room. If you can wait until Sunday the 15th, the Cleveland-based early music ensemble Les Délices (“lay day-LEASE”) will make it worth your while with a program of 17th-century French love songs. This was a time when composers were experimenting with a new, expressive language of musical gestures designed to make hearts melt with tenderness, ache with longing, weep in despair or burn with passion. You’ve been warned. Oboist and recorder player Debra Nagy, viola da gambist Emily Walhout, lutenist Nigel North and soprano Carrie Henneman Shaw perform in a room designed for period instruments. FMI and tickets ($25/$10). The Baroque Room is on the second floor of the Northwestern Building in St. Paul’s Lowertown, down the hall from Studio Z.

5) “The Princess Bride” screening and Cary Elwes book signing at the Mall of America. Also on Sunday the 15th. The handsome star of the 1987 cult film has a new book called “As You Wish: Inconceivable Tales from the Making of the Princess Bride.” The first 300 people in line will attend a screening of the film, a Q&A with Elwes and the book signing. The event begins at noon; wristbands will be distributed starting at 11 a.m. at Theatres at MOA, Level 4, South. FMI, and be sure to read the Official Event Guidelines. 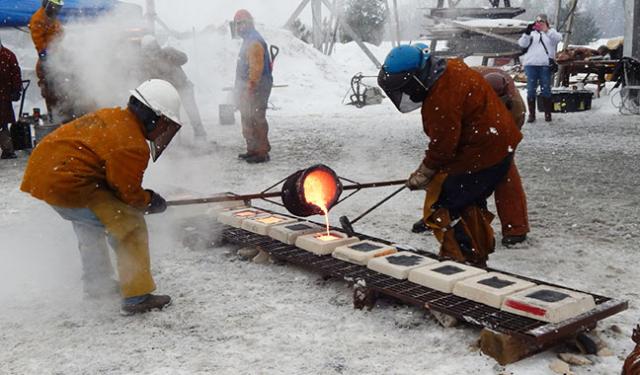 6) Valentine’s Day Iron Pour at Franconia Sculpture Park. Dress warm, bring a thermos, and gather around a cupolette (furnace) that blazes at 2,700 degrees to melt recycled iron (fun fact: it’s mostly broken-up old radiators from Northrop). The red-hot liquid metal flows into a 150-pound ladle used to fill sculpture molds. Cool off with a tour of the 43-acre sculpture park and its rotating collection of 100+ contemporary sculptures. Noon-5 p.m. FMI. Next year, we swear we’ll give you enough advance notice that you can create your own mold.