Before we as a culture became obsessed with the Kardashians, we followed real news like, for example, our space program. On May 5, 1961, everyone in America with access to a TV (then black-and-white) watched Alan Shepard ride “Freedom 7” into history. Twenty days later, President Kennedy challenged the U.S. to put a man on the moon by the end of the decade. On July 20, 1969, Neil Armstrong and “Buzz” Aldrin were kicking up moondust with their space boots.

Except for tragedies (the fire that killed astronauts Gus Grissom, Ed White and Roger Chaffee, the Challenger and Columbia disasters) and near-tragedies (Apollo 13), that might have been the peak of public attention.

How many people today know or care that the International Space Station, zooming around the Earth at 17,500 miles per hour, has been continuously occupied since November 2, 2000? That the Space Shuttles have all been retired? (Atlantis made the final shuttle flight in July 2011.) That ever since, American astronauts have traveled to and from ISS on Russian spacecraft? Most people today are indifferent to the space program or think it’s a waste of money.

But not the people at the Science Museum. Ten years ago, Paul Martin, the museum’s vice president of exhibit development, decided the museum should create a show about space. Instead of the usual retrospective, he wanted a modern take: a look at where we are and might go next.

“SPACE: An Out-of-Gravity Experience,” which opens today, deserves to be a hit. Designed and developed by the Science Museum in partnership with the International Space Station Office of NASA’s Johnson Space Center, the California Science Center and partner museums, it begins with a brief rah-rah film hosted by Neil deGrasse Tyson that sums up the space program to date (minus the tragedies) and issues a call to get out there and colonize.

Exiting the film, entering the exhibition, you’re immediately hit with the news that space wants to kill you. How? Pick one: radiation, vacuum, roasting and freezing temperatures, large and small meteors speeding toward you like bullets. Without a spacesuit, you’re dead in 90 seconds. An actual quote: “Your spit and tears boil from your face.”

You’re in the Science Museum, not Disney World. This is a fact-filled show, full of hard truths but also fun, expertly constructed to engage different ages on different levels. Almost every stop is hands-on. How does a rocket launch? How do everyday objects behave differently in a vacuum? What’s it like to work in a space glove? (Awful.) Why doesn’t the Space Station fall back to Earth? How does an ion engine work? How does weightlessness affect the human body? What might it be like to live on Mars, when we get there? How do astronauts eat, sleep, and (kids’ Number One question, and probably Number Two) go to the bathroom? There’s a full-sized space toilet available to try, meaning perch on and have your picture taken.

There are a few relics, including Neil Armstrong’s gloves from Apollo 11, one thumb patched with what looks like duct tape. There’s footage of astronauts living and working in space, and short films that clearly explain complex concepts. And there’s a full-scale, climb-aboard, rotating mockup of the Space Station’s Destiny Lab that gives you a floating feeling. It’s the first of its kind, the only one in the world. We didn’t try it. 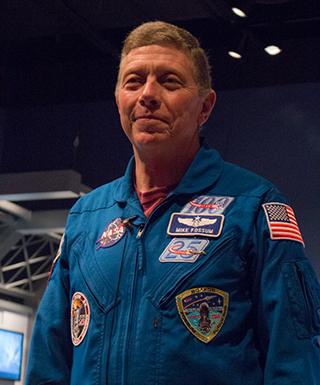 NASA astronaut Michael Fossum briefly touched down in St. Paul to support the “SPACE” show and dazzle us. Fossum has logged more than 194 days in space on three missions, including over 48 hours of Extravehicular Activity (EVA) in seven spacewalks. In 2006 and 2008, he traveled to the ISS on the space shuttle Discovery. In 2011, he left Kazakhstan in a Soyuz spacecraft and spent 167 days on the space station, two months as commander.

To date, Fossum has orbited the earth more than three thousand times, traveling over 77 million miles. “It’s kind of hard to even imagine,” he says. “But you make enough trips around the planet – 16 a day – and the miles add up over 194 days.”

He’s ready to go again. And he views “SPACE” as a way to get people excited about the space program.

“Come to see it,” he says. “Hear President Kennedy giving us his challenge to go to the moon, which was an outrageous challenge – we had barely launched rockets, to go to the moon in that amount of time took huge national resources, and we know there were geopolitical reasons for doing it, too. Then come through and see some of what the space shuttle program did. It was built to deliver big pieces of space station to space, and it finally did. Then see what we’re doing now with the space station, some of the science exhibits.

“Then dream about where we’re looking for the future. Can you see yourself on Mars? There will be human footprints on Mars someday. I hope there’s an American flag on their shoulder.”

You can read our complete interview with Fossum here.

Tonight (Friday, Feb. 20) and tomorrow at the Walker in Minneapolis: Chris Schlichting with Jennifer Davis and Alpha Consumer: “Stripe Tease.” Movement meets music meets visual art in the world premiere of a Walker commission by choreographer Schlichting. His collaborators are rock/pop guitarist Jeremy Ylvisaker and Alpha Consumer, a band that includes Mike Lewis and JT Bates. The visual art is by Jennifer Davis, creator of collages and paintings. 8 p.m. Friday, 2 p.m. and 8 p.m. Saturday in the McGuire Theater. FMI and tickets ($22/$25).

Saturday at Plymouth Congregational Church in Minneapolis: Ten Thousand Things: “The Unsinkable Molly Brown.” Timothy Roser of Theoroi, a young professionals group sponsored by the Schubert Club, wrote this preview for MinnPost: “That Ten Thousand Things chose to perform this musical by Meredith Willson and Richard Morris is not happenstance. TTT brings theater to those who might not otherwise experience it: people who are homeless, incarcerated, in shelters and low-income centers. ‘The Unsinkable Molly Brown’ is a rags-to-riches classic about resilience and staying true to yourself. Born into poverty, Molly marries a rich man; marginalized by her new social circle, she escapes to Europe. There she realizes that being herself is what makes her happy and why her husband fell in love with her. While many of us would like to strike it rich, the truth is, we find greater value in friends and family who love us for who we are.” Directed by Michelle Hensley. After this weekend at Plymouth, the play moves to other locations. 8 p.m. FMI and tickets ($30).

Saturday at Burnet Gallery in Minneapolis: “I AM KXNDNESS” Art Show. Leave your money at home. To buy art from this show, you’ll pay with an act of kindness. Conceived by Sarah Edwards, curated by artist Jesse Draxler, it includes original works by nearly 30 artists. Payments range from volunteering at the Golden Valley Humane Society to shoveling someone’s driveway after a heavy snowfall. In the Chambers Hotel. 6 p.m. Free. FMI.

Sunday at Birchbark Books in Minneapolis: Open House with Louise Erdrich. The award-winning author is the owner of this cozy, inviting bookstore near the north end of Lake of the Isles. Cider, cookies and book talk will be available all day. From 5-8 p.m., Erdrich will read from a new work in progress and sign books purchased at the store. The event includes a raffle; tickets are $5 each, and among the prizes are signed first-print, first-edition books by Erdrich. 10 a.m. – 8 p.m.

Monday at the Amsterdam in St. Paul: Julia Holter and the Spektral Quartet. In the latest installment in the SPCO’s Liquid Music series, avant-pop composer/performer Julia Holter and Chicago’s Spektral Quartet perform the quartet’s latest commission from composer Alex Temple. You’ve never heard of any of them? That’s kind of the point of this series, which we’ve found consistently interesting and worthy of attention. The word is spreading. When keyboardist Nils Frahm and instrumental trio Dawn of Midi played their Liquid Music concert in November, all were making their Twin Cities debuts and 340 people showed up. 7:30 p.m. FMI and tickets ($15/$10).

Tuesday at Northrop in Minneapolis: The Nile Project. You may have seen the Ethiopian American singer Meklit Hadero at the Cedar. With Egyptian ethnomusicologist Mina Girgis, she’s a founder of the Nile Project, formed to bring attention to the cultural, social and environmental challenges of the world’s longest river. Featuring artists from the 11 Nile countries, the music combines diverse instruments, languages, traditions and rhythms. FMI and tickets ($26-$42). Here’s a video.