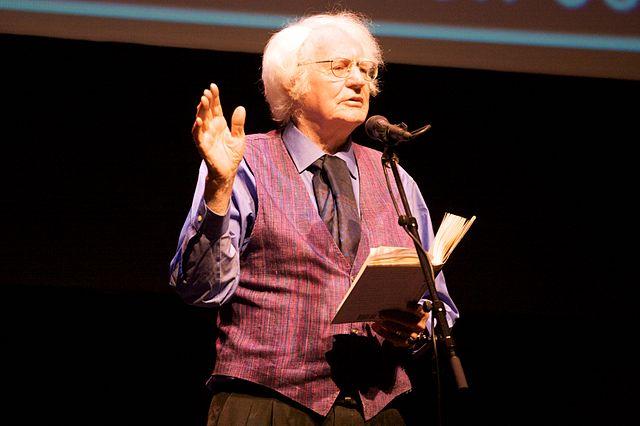 CC/Wikimedia/Nic McPhee
Robert Bly has a new book on the way.

The great Minnesota poet Robert Bly has a new book on the way, and a documentary about his life is in the final stages of production. Good news for poets, poetry fans, lovers of literature and anyone who has been moved and inspired by a man who has written about the deepest, most profound things in life, using language anyone can read.

Due out April 14 from White Pine Press, “Like the New Moon I Will Live My Life” includes more than 170 poems collected from out-of-print books, chapbooks and uncollected work spanning 50 years, all predating 1980, from early to midpoint in Bly’s long and prolific career. (He turned 88 last Christmas Eve.) On Monday, April 13, at 7 p.m., Plymouth Congregational Church will hold the publication reading as part of its Literary Witnesses series.

Bly is expected to be there, along with White Pine’s editor and publisher Denis Maloney and poet Tony Hoagland, who are both staying over from the AWP convention of writers, editors, publishers and educators that ends the Saturday before. Many friends of Bly plan to come and read; the list includes Thomas R. Smith, Freya Manfred, Jim Moore, Thor Bacon, Louis Jenkins, Connie Wanek, Michael Dennis Browne, Cary Waterman, Robert Johnson, Jim Heynen, Joyce Sutphen, Ed Bok Lee, and Tim Young. We’ll let you know more specifics as we learn them. Meanwhile, mark your calendar.

Sometime late this summer, we’ll finally get to see director Haydn Reiss’ documentary film about Bly. Co-producer Dominic Howes has received a legacy grant from MNFilmTV and the film must be completed by June. DVDs will be available in July or August.

Reiss has been fascinated by Bly for 20 years. There are plenty of people in Minnesota for whom Bly has been a beacon even longer. Let’s hope the film has public showings.

Continuing its trademark blend of provocative and wonky, The Theater of Public Policy has announced a new season, with most performances taking place Mondays at the Bryant Lake Bowl. Formed in 2011 by Gustavus Adolphus college pals Tane Danger and Brandon Boat, T2P2 uses humor to reframe serious things like politics, economics and education. They invite a guest, interview the guest, then use the guest’s responses to create improvised comedy sketches. It’s a lot funnier than it sounds, and a new way to learn more about local issues.

Flying out of the Lindbergh terminal anytime soon? The See 18 Short Film Space is now open. Robyne Robinson, director of arts and culture for the Airport Foundation MSP, worked with Craig Laurence Rice and Jesse Bishop of the Film Society of Minneapolis/St. Paul to curate a group of award-winning short films by Minnesota filmmakers. Films currently in rotation include Ben Lifson’s “This Movie Had No Script,” a  documentary about Minnesota’s improv theater tradition; Kjell Kvanbeck’s “Golden,” a dramatic story of a couple on their 50th anniversary starring Jungle Theater founder, director and actor Bain Boehlke; and Michelle Brost’s “Leonard,” an animation about a lumberjack. FMI. Pass this on to traveling friends with layovers here.

Thursday (Feb. 5) at Northern Clay Center in Minneapolis: 7th Annual Chili Cook-Off. Throw a pot, take a tour, eat chili, maybe bring home a chili bowl from the sales gallery. From 4-6 p.m., make your own chili bowl at the free workshop. At 5, tour the kiln room. From 6-8 p.m., dine on chili, vote for your favorite, and meet featured artists Bill Gossman, Bianka Groves and Karin Kraemer. With cider from Sociable Cider Werks, cornbread from Longfellow Grill and dessert from Birchwood Café. $5. FMI and registration.

Thursday at the Minnesota History Center in St. Paul: Book launch for “Blues Vision: African American Writing from Minnesota.” What does it mean to be black in Minnesota? What is it like? How much, and how little, have things changed? Spanning the Harlem renaissance through the present day, this new anthology of prose and poetry reveals complex realities and spotlights a rich Minnesota literary tradition. The many contributors – 43 in all – include Gordon Parks, Nellie Stone Johnson, Taylor Gordon, Louis Alemayehu, Sha Cage, Mary Moore Easter, Kim Hines, Tish Jones, Etheridge Knight, and Roy McBride. Co-published by the Minnesota Historical Society Press and the Minnesota Humanities Center, edited by Alexs Pate with co-editors Pamela R. Fletcher and J. Otis Powell, funded in part by Legacy money, the book will make its official debut at an event that includes a social hour, program and signing. 6-9 p.m. FMI. Free.

Friday and Saturday at Studio Z in St. Paul: Weekend at Keys Please. Each year, pianists and longtime friends Paul Cantrell, Carei Thomas and Todd Harper meet to play music together – in Cantrell’s words, “solos and group pieces, composition and improv, horseplay and reverie, chocolate and peanut butter.” This will be their 14th year of good music and good will. There’s always a special guest; this time it’s the very fine saxophonist Nathan Hanson. 8 p.m. both nights, $10 at the door. Students free with ID.

Saturday at Bedlam Lowertown in St. Paul: A Drink and a Dance. Enjoy excerpts from the latest work by Stuart Pimsler Dance & Theater, chats with the artists, and drinks with friends in a cabaret setting across from Union Depot. FMI. Tickets ($15 online, $17 door; includes a complimentary drink).

Sunday at Hamline’s Sundin Music Hall in St. Paul: The Musical Offering: Mozartiade! Cocktails are routine at many of today’s concerts, but in Mozart’s time, people knew how to live. Performances included breaks for real food, wine, desserts and socializing. In that stellar tradition, the Musical Offering – an ensemble of Minnesota Orchestra musicians – presents an afternoon of chamber music with hearty appetizers (chicken schnitzel, Bavarian potato pancakes), wine (three kinds, plus beer, coffee and tea), and desserts (sachertortes, apfelstrudel), all in the Viennese style. The music is equally tasty: a flute sonata, clarinet trio, string quintet and serenade. 3 p.m. FMI and tickets ($50, all-inclusive).

Sunday at Common Good Books in St. Paul: Billy Collins reads from his poetry. Two words: arrive early. A former U.S. Poet Laureate, Collins is the most popular poet in America (according to the New York Times). His books break sales records and his readings are usually SRO. 2 p.m. Free.

April 18-19 at the Commonweal Theatre in Lanesboro: 18th Annual Ibsen Festival. Each year, the Commonweal produces a play by Norwegian playwright Henrik Ibsen, which is presented during a weekend of events and presentations including lectures, film presentations, musical concerts and artist displays. This year’s play is “The Master Builder” in a world premiere adaptation by Jeffrey Hatcher. FMI and reservations.