The city of St. Paul struts its stuff convincingly in a new “Insider’s Guide” and video released earlier this month by Visit Saint Paul, its tourism agency. The arts and culture are a major focus, no surprise for a city whose mayor, Chris Coleman, is famously an arts booster and which receives major support from the Knight Foundation. Paging through the guide, we find a full-page bleed of Frogtown artist Seitu Jones and another of the Ordway; photos of the Twin Cities Jazz Festival, now firmly rooted in the saintly city; and an events directory that includes the annual American Craft Council show, St. Paul Art Crawl, Festival of Nations, Flint Hills International Children’s Festival, the Music in Mears concert series, the Ordway’s Summer Dance Series, Jazz Fest, Lowertown Blues Festival, Concrete and Grass Music Festival and many more.

You can view the guide online or request a printed copy. The video gives the impression that everyone in St. Paul is under 30. It also makes you want to jump on a bike and drink beer, but not at the same time.

The American Composers Forum is celebrating its 40th anniversary of supporting contemporary composers and new music. Founded in 1973 by Libby Larsen and Stephen Paulus as the Minnesota Composers Forum, incorporated in 1975, it was already gaining national attention in the 1980s. Through grants, commissions, performance programs and professional development programs, ACF has nurtured the work of thousands of composers in all 50 states. Its in-house record label, Innova, has released 460 new titles. Its BandQuest and ChoralQuest programs, which bring new music and curricula into middle-school bands and choirs, has served more than a half-million students. Like the Loft, Northern Clay Center, Textile Center and Playwrights Center, among others, the ACF is one of those arts organizations that was born here, has remained here, and has grown in influence and scope to become part of our national fabric.

For its 40th, ACF is planning a National Composer Night Out (NCNO) on May 14. Composers, performers, producers and music fans are invited to host an event of their choosing: a concert, a house party, a meeting at a coffee shop or music café. So far, 10 states have signed up. A local celebration will take place in St. Paul, with details TBA. Meanwhile, ACF is inviting composers to submit an audio file with a short sound bite for a new music piece on SoundCloud called “Chained Melody.” Go here to learn how to sponsor an event (ACF will help) or add your music to “Chained Melody.”

At the suggestion of his son Andrew, ACF co-founder and prolific composer Stephen Paulus started writing a blog in spring 2013, telling the stories behind his music. “He liked the idea,” Adam wrote, “but unfortunately only made through a half dozen before his stroke in July of 2013.” Paulus died last year on Oct. 19. His family has begun publishing his writings, starting with a note by Paulus on “Pilgrim’s Hymn,” one of his most famous choral pieces. Poet Michael Dennis Browne, who penned the lyrics, added his own note. There’s also a link to a performance of the hymn by the Mormon Tabernacle Choir, who was singing it on the morning Paulus passed away.

The Dakota hasn’t been a jazz-only club for years, but it’s bringing in a lot of national and international jazz musicians over the next several weeks. March 3: René Marie sings from her Grammy-nominated album “With Love, to Eartha Kitt.” March 4: The Pedrito Martinez Group plays Afro-Cuban jazz. March 9: Grammy winning tenor saxophonist David Sanchez blows the house down. March 10-11: Grammy winning vocalist Cassandra Wilson sings from her new Billie Holiday CD, “Coming Forth by Day.” March 25-26: Ellis and Delfeayo Marsalis (Wynton and Branford’s dad and brother) bring “The Last of the Southern Gentlemen” north to Nicollet Mall. March 29: Jazz vocalist Tierney Sutton and cellist Mark Summer pay tribute to Joni Mitchell.  March 31: The sensuous sounds of Brazilian jazz pianist, singer and songwriter Eliane Elias and her trio. The jazz continues in April 1 with Rebirth Brass Band, April 12 with the Anat Cohen Quartet and April 22 with Danilo Perez, Panamanian pianist/composer, founder of the Panama Jazz Festival and member of Wayne Shorter’s quartet. On June 22, vocalist Kurt Elling brings his “Passion World” to the Dakota stage. Tickets are on sale now to all events. Call 612-332-5299 or visit the website.

Tonight (Thursday, Feb. 26) at St. Catherine University in St. Paul: “A Wizard of Their Age” lecture and reading. Harry Potter fans, this is for you. J.K. Rowling’s novels about the boy wizard defined a generation of young readers and are now the topic of serious scholarship. Born from one of St. Kate’s most popular literature courses, taught by Cecilia Konchar Farr, “A Wizard of Their Age: Critical Essays from the Harry Potter Generation,” just out from SUNY Press, is a collection of academic essays by students across the country. Konchar Farr will deliver the lecture, which will include brief readings by many alumnae and contributors. In Jean d’Arc Auditorium, Whitby Hall, the building nearest the corner of Randolph and Cleveland. 7 p.m. Free and open to the public. Tomorrow is the official book launch reading at Magers and Quinn in Minneapolis. 7 p.m. Also free and open to the public.

Tonight at the Music Box Theatre in Minneapolis: “To Begin With.” Jeffrey Hatcher’s witty new play was inspired by a book Charles Dickens wrote for his children. The part of Dickens is played by his great-great grandson, Gerald Charles Dickens, an actor, director and producer based in London. 7:30 p.m. FMI and tickets ($31). Ends March 8. 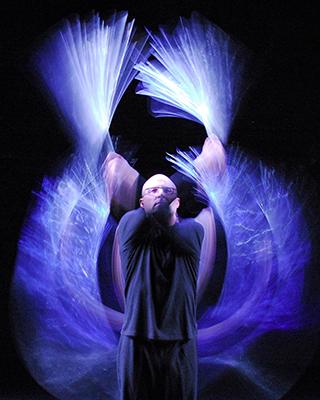 Friday and Saturday at the Cowles in Minneapolis: Joe Chvala and the Flying Foot Forum: “The Percussion Project.” Percussion meets percussive dance in an evening of flying feet, pots, pans, hands and rhythms. Part of the fun is watching Peter O’Gorman play elaborate instrumental set-ups of his own devising (drums, castanets, crashers, clave bells, cowbells, sizzle strips, chimes) and turn air itself into a musical instrument. With choreography by Chvala and Karla Grotting, music by O’Gorman and Mary Ellen Childs. 7:30 p.m. FMI and tickets ($30). Post-show discussion Friday.

Saturday at the State Theatre in Minneapolis: “A Prairie Home Companion.” Garrison Keillor crosses the river for a live broadcast with guests Brandi Carlile and Jearlyn Steele. This is the first of two shows at the State; the second is March 7, with the Baltimore-based Girls Quartet. 4:45 p.m. FMI and tickets ($35-$55), or buy in person at the State Theatre box office.

“Mom! Louie’s looking at me again!” Born in St. Paul, the second youngest of 11 children, Louie Anderson became a nationally known stand-up comedian, actor and author. A Brave New Workshop alum, he’ll return to his roots on Friday and Saturday, March 6 and 7, for two stand-up shows at the BNW’s ETC event space in Minneapolis. Doors at 6 p.m., show at 7. FMI and tickets ($55 general admission).

Entertaining, enlightening, casual and affordable, the Minnesota Orchestra’s “Inside the Classics” series returns for its sixth season on March 13. Conductor Sarah Hicks and host Sam Bergman will start the evening with a lively discussion of Brahms and his music, illustrated with musical excerpts played by the orchestra. After intermission, Hicks will lead the orchestra in a full performance of Brahms’ First Symphony, sometimes called “Beethoven’s Tenth.” Why? That’s one of many things you’ll learn along the way. 8 p.m. FMI and tickets ($29 adults/$12 children).