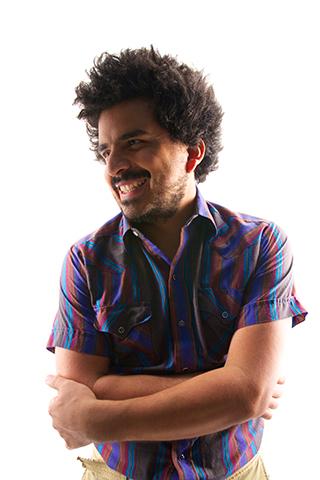 Roberto Carlos Lange, a.k.a. Helado Negro (Spanish for “black ice cream”), wrote this on his Facebook page earlier this month: “Playing records tomorrow. Come, yes? It’s a Thursday and I will play music that makes you feel like we are [lying] down on a rug in my living room together.”

Ramp that up a bit – make the music live, with 20 musicians, put it in the new Ordway Concert Hall, but keep the intimacy, the community, and the element of surprise – and you have an idea of what to expect from Saturday night’s Liquid Music concert, “Helado Negro: Island Universe Story (Cuentos del Universo Solitario).”

More than two years in the making – Liquid Music curator and driving force Kate Nordstrum first heard about Lange four years ago, got in touch, and they started talking seriously not long after – this is the biggest event yet for the SPCO’s forward-thinking new music series, which has ignored boundaries from the start. Is it classical? That depends on how you define “classical.” Experimental? Sure. Collaborative? Often. Unconventional? Always. Challenging? Sometimes, but that has its own rewards. We’ve seen many Liquid Music events, and not one has been dull or disappointing. Many have been exciting, and some have been revelatory.

Now in its third season, Liquid Music is winning national attention and drawing crowds. The first three concerts sold out the SPCO Center and the Amsterdam. As part of the Ordway’s monthlong “Rock the Ordway” celebration, Helado Negro will play a room with more than three times the Amsterdam’s number of seats. That should not be a problem.

What about the music? Helado Negro has been variously described as “music that crosses borders as easily as a diplomatic passport,” “tropical pop,” “the dissolving context of a dream,” a “sensual, psychedelic dance party” and “a sonic landscape that reflects 21st-century Latin America.” Born in Florida to Ecuadorian parents, now based on Brooklyn, Lange grew up among bass beats from passing cars, boom boxes down the block, late-night parties and the sounds of the various Latin American cultures of southern Florida. He found funk and hip-hop, folk-pop and electronica, recording himself in his home studio, sampling, synthesizing and looping. He thinks and sings bilingually, in Spanish and English. In an interview with Liquid Music that you can read online, Lange explained, “The music I create involves lots of small parts, just like an orchestra. Small bits of ideas that stack vertically.”

Here are two music videos, one for “Invisible Heartbeat” and one for “I Krill You,” both songs from his album “Double Youth,” released in 2014. You can hear his recorded music on Spotify, including the three EPs for which the Liquid Music concert is named, “Island Universe Story.” It’s lush and very likeable, full of mesmerizing beats, hypnotic grooves, catchy rhythms and a sense of joy. But know that what you hear at the Ordway will sound different. Lange and the other musicians spent a week in residency at the Massachusetts Museum of Contemporary Art earlier this year, working out how to take music he recorded on his computer and reconfigure it for live performance on more instruments, with backing vocalists. Saturday’s event will be the world premiere.

We asked Nordstrum for her top three reasons to go. First: “As with all Liquid Music events, it’s an opportunity to explore new and exciting music from artists you may or may not be familiar with. In this case, it’s an artist’s dream project realized.” Second: “The special guest artists. People may or may not know everyone by name, but these are key players in bands people know and love. It’s an opportunity to see incredible players who make great bands happen coming together for a whole new reason.” Third: “The chance to see the beautiful new 1,000-seat Ordway Concert Hall in heavy action. We know it’s a great place for chamber music, but this concert will utilize the hall in a whole other way. Everyone will be hooked up. There are awesome electronics. It’s going to rock out.”

Doors at 7:30 p.m., music at 8. FMI and tickets ($15/$10 Liquid Music members). Unlike SPCO concerts, this event is general admission, so if you care where you sit – which might not matter so much in the Concert Hall, where all seats are within 90 feet of the stage – arrive early.

Tonight at Pillsbury House Theatre: “Death Tax.” A stellar cast and a tough topic none of us can avoid forever – end-of-life planning – make this a worthwhile evening at the theater. Lucas Hnath’s play poses more questions than it offers answers, and the main message may be “don’t be mean and paranoid,” but with Wendy Lehr as the wealthy, elderly Maxine, Tracey Maloney as her bitter daughter, and Regina Marie Williams in two roles (oh, give her three!), you’re seeing excellence in action. John Francis Bueche’s clean, simple set convincingly turns the Pillsbury’s stage into a high-end nursing home. Directed by Hayley Finn, with Clarence Wethern as Todd and Charley. 7:30 p.m. FMI and tickets ($25 or pick-your-price). Through April 4. 14+ (strong language).

Saturday at the Black Forest: “Next Exit: A Storytelling Show.” Mike Finley, Danny Klecko, Mary Jo Pehl and Richard Rousseau share tales of roadside attractions, car trouble and unknown destinations. Films by Wayne Nelson. Eric Christ hosts. 7:30 p.m. in the banquet space. $10 at the door buys admission and a beverage. If you haven’t been to the Inn in a while, pay a visit to the Richard Avedon photo of the Generals of the Daughters of the American Revolution that hangs in the bar. Inscribed and signed in the lower left corner, it’s been there since the early 1970s, when Avedon had one of his earliest museum shows nearby at the MIA. In the 1980s, a customer pulled out a gun and shot it. You can still see two bullet holes.