Artscape is taking a break to attend AWP. We’ll be back next Thursday, April 16.

From Wednesday through Saturday, the Minneapolis Convention Center will be one big writers’ block.

The AWP Conference – AWP stands for Association of Writers & Writing Programs – will be held here. And it’s huuuge.

That’s a lot of money for a crowd of mostly poets, novelists, editors, professors and students, none famous for being big spenders. But they have to eat, sleep, and get around, leaving us richer than before. And not only in dollars. Hundreds of offsite events – all open to the public, most free – will feature many of our nation’s top writers. We’ll point you toward a selection coming up.

But first: The Twin Cities are a perfect place for the AWP conference, which hasn’t been held here since 1992. We have the Loft, the landmark literary center that serves as a national model, and the Playwrights’ Center. The creative writing program at the University of Minnesota is ranked among the nation’s best. The Kerlan Collection of children’s literature and the Givens Collection of African American literature are both at the U.

We have Graywolf, Coffee House and Milkweed, three of the top independent literary presses. We’re crawling with award-winning writers, readings and author series. Both Minneapolis and St. Paul are among the 10 most literate cities in the U.S. We had the first lesbian/feminist bookstore in the United States. B. Dalton was born here (and, sadly, died here.) We have poetry on the sidewalks in St. Paul.

So we’re ready for you, AWP. And even though you’re the largest literary conference in the country, you should feel right at home. “We have an outstanding creative community,” Tennant said. “[AWP] fits very nicely with our community DNA.” 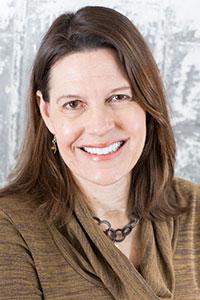 Courtesy of the Loft
Jocelyn Hale

Jocelyn Hale, executive director of the Loft, is excited about showing off Open Book to visitors. “I guarantee it’s one of the prettiest homes for the literary arts in the country. We have relationships with all the literary centers around the country, and [AWP] is an opportunity to host them in private and public parties. We have great relationships with writers of color across the country, and we’ll be hosting events for them.

“For us, AWP is an opportunity to recruit judges and mentors from the national field, and teaching artists for our online classes. We have students all over the country now. The word has not gotten out as widely as it could that our teaching artists can teach from anywhere. We can keep expanding that pool.”

Hale announced in January that she’ll be stepping down as the Loft’s director, and a national search is under way, so “AWP is a fantastic opportunity to talk with people who might be candidates for the job. Interviews are happening.”

Feminist writer Kate Harding, a columnist for DAME magazine and author of “Asking for It: The Alarming Rise of Rape Culture – and What We Can Do About It,” due out in August, recently moved here from Chicago, just in time for AWP. She’s been attending the conference on and off for several years, starting when she was working on her MFA in creative writing.

For Harding, AWP is a chance to connect and reconnect with other writers. “Especially for those of us who don’t live in New York, there are rare opportunities for us to get together with this many people at this many literary cocktail parties, readings and events,” she said. “Lots of cities, especially Minneapolis, have wonderful, vibrant literary scenes, but nothing like this kind of volume.

“Which is also the dark side of AWP. It has become so incredibly crowded, and you’re so overscheduled going into it, that it’s daunting.”

Harding recalled “one year when I went to New York, mostly to catch up with friends, and ended up not going to a single panel. I didn’t even pick up my badge.” Some years, “it’s a blur of interesting talks in hotel bars.”

We asked Hale and Harding to point us toward their favorite AWP offsite events, then added a few of our own. (Conference attendance requires registration. A Saturday pass is available for $40.)

Friday, April 10, at Open Book: BUST Magazine Reading Hosted by Roxane Gay and Amber Tamblyn. Gay is the author of “Bad Feminist” and other books; Tamblyn is an actress and poet whose new book, “Dark Sparkler,” explores the lives and deaths of child star actresses. 7 p.m. FMI. $5 suggested admission. “Our performance hall seats 200 people,” Hale said. “We have multiple overflow rooms, but if you want to be in the hall, get there early and get in line.”

Hale also likes the Rain Taxi 20th Anniversary Bash happening at the Walker on Thursday, April 9. Free gallery admission, a movie, poetry readings and a drinks party. FMI. One reading is ticketed, all other events are free.

Thursday, April 9, at the Skyway Theater: The 2015 VIDA Awards. In 2013, the New York Review of Books published 212 book reviews by male writers and 52 by female writers. Of the authors reviewed, 307 were male and 80 were female. Well, geez. VIDA: Women in Literary Arts, whose eye-opening VIDA Counts have tracked such things since 2010, holds its first annual VIDA Awards to honor the accomplishments of women in literature and the publishers that support them. 7:30 p.m. FMI and tickets ($10).

Friday, April 10 at Patrick’s Cabaret: Rain Taxi Presents: A Literary Tribute to Grant Hart and Hüsker Dü. Hart’s most recent album, “The Argument,” is based on William S. Burroughs’ treatment of John Milton’s “Paradise Lost.” Writers gather to honor Hart and his band; Hart talks about the album and the influence of literature on his music, then plays a short set. Space is limited. 9 p.m. FMI and tickets via PayPal ($10).

Thursday, April 9, at the Cedar: Arab American Soundscapes: An Evening of Poetry and Performance. Music by Naj Bagdadi and others, a line-up of acclaimed poets, and a film of the Euphrates River by Iraq-based video artist Ali Al-Tayar. Presented by Mizna and the Cedar. FMI and tickets ($10).

Monday, April 13, at Plymouth Congregational Church: Robert Bly and Friends. By now, the AWP will be over and most out-of-towners gone. So there’s a good chance of getting into this Literary Witnesses event celebrating the publication of 88-year-old Robert Bly’s latest collection, “Like the New Moon I Will Live My Life.” The friends expected to attend and honor the great Minnesota poet, troublemaker and inspiration include Michael Dennis Browne, Louis Jenkins, Ed Bok Lee, Jim Moore and Joyce Sutphen. FMI. 7 p.m. Free.

Here’s the AWP’s schedule of offsite events. And here’s the Rain Taxi calendar. Check your neighborhood café or bookstore to see if they have something AWP-related going on.

Correction: We learned after publication that this is not the first time AWP has come to Minneapolis; that statement has been removed from this version. The conference was held here in 1992. Some 600 people attended. So welcome back, AWP, and now that you’ve seen us, don’t be a stranger.