The Bush Foundation has picked 16 organizations from across Minnesota, North Dakota and South Dakota for its 2015 Community Creative Cohort, a one-time program that allows the foundation to learn from their experiences. Insights from the Cohort on engaging people in the arts in meaningful ways and integrating the arts into public life will help inform the foundation’s future work in the arts.

Each organization will receive an unrestricted grant of $100,000. All will work with Bush over the next six months to articulate the challenges and opportunities associated with their work, especially around efforts to engage the community, build and support leadership, and advance racial and economic equity.

From the Dakotas, the North Dakota Council on the Arts in Bismarck and Theatre B in Fargo, First People’s Fund in Rapid City and Matthews Opera House and Art Center in Spearfish, South Dakota, were all chosen to participate. Learn more here about each organization.

The Knight Cities Challenge will award $5 million to 32 organizations and individuals for ideas that make cities more successful. More than 7,000 ideas poured in from the 26 communities where the Knight Foundation invests. (All had Knight-Ridder newspapers in 1991, the year James L. Knight, its last founder, died. Although Knight-Ridder no longer exists – McClatchy acquired it in 2006 – the Knight Foundation continues to support those communities and others.)

St. Paul is a Knight community with four Cities Challenge winners. Greater MSP (Minneapolis-Saint Paul Regional Economic Development Partnership) will receive $117,000 for 4 Play, a project to promote the state’s seasonal outdoor activities. The mayor’s office receives $175,000 for an 8-80 Vitality Fellow, embedded in the mayor’s office, who will work across departments to manage the $42 million committed to the mayor’s 8-80 Vitality Fund, which makes walking, biking and public spaces a priority in all city projects.

Community organizer, placemaker and artist Jun-Li Wang scored $37,960 for MN Nice Breakers, which will help newcomers quickly establish social networks that attach them to the city, and $67,288 for Rolling Out the Warm Welcome Hat, a plan to welcome newcomers with monthly ceremonies featuring city leaders and hats for Minnesota winters. Learn more here about all the challenge winners. 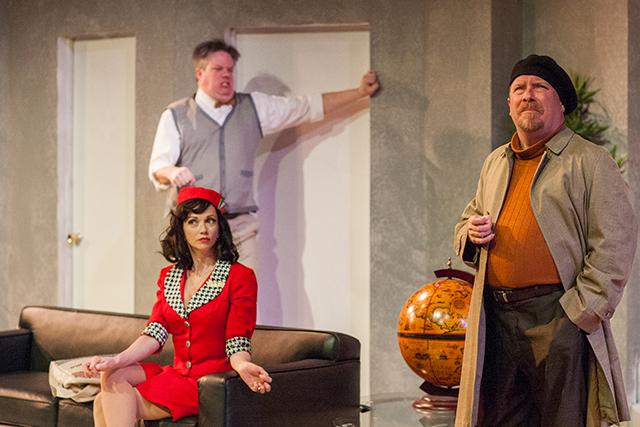 Let’s all agree that “Boeing-Boeing” is not the world’s most PC play. A Torch Theater production now at the Minneapolis Theatre Garage, it’s the tale of a bachelor in Paris who juggles three fiancées, all “air hostesses” (flight attendants) on different international airlines, with different schedules, chosen for their looks, morality, and intelligence (in that order). So it won’t win any prizes for promoting gender equality.

It doesn’t have to. A French farce written by Marc Camoletti, “Boeing-Boeing” premiered in Paris in 1960. It’s dated, much like old Hollywood rom-coms are dated, without a mean bone in its body. Silly, outrageous, smartly directed by Craig Johnson, it’s also laugh-out-loud funny.

Into their lives drops Robert (Zach Curtis), an old friend from Bernardo’s school days whose presence unbalances everything. Schedules overlap and the women converge. For a time, Bernardo and Robert keep them from discovering each other by shuffling them among the apartment’s several rooms. The doors on Eli Schlatter’s set get a workout. One slams and another opens, over and over.

As Berthe the long-suffering French maid – it’s her job to prepare three separate cuisines and maintain the illusion that each woman is Bernardo’s one and only – Perry has the best accent, the best lines and a suggestive feather-duster. There’s a lot of physical comedy, including a rough-and-tumble struggle between Bernardo and Robert involving a red beanbag chair. Two hours pass in a flash. “Boeing-Boeing” won’t enlighten you, solve the world’s problems or provoke a single deep thought. But you’ll leave happy. Ends April 4. FMI and tickets ($8-$30). Friday is sold out.

Audiences at last weekend’s SPCO concerts with artistic partner Patricia Kopatchinskaja were in for a few surprises. First, although the concerts were originally announced as “Kopatchinskaja Plays Bach, Schubert and Ligeti,” there would be no Bach or Ligeti, SPCO President Bruce Coppock announced from the stage. Instead, Kopatchinskaja had created her own arrangement of Schubert’s “Death and the Maiden,” its four movements framed and linked by music from composers old and new: August Nörmiger, Michi Wiancko, György Kurtág, Carlo Gesualdo, Johannes Brahms, Paul Angerer, John Dowland, Heinz Holliger.

Second, the concerts would be recorded for the SPCO’s first commercial release from the new Ordway Concert Hall. Turn your phones off, Coppock told the crowd. Don’t even set them to vibrate. The hall is so sensitive to low dynamics that vibrations can be heard.

More surprises: Kopatchinskaja first came on stage dressed as death, in a skeleton costume, antic and fey. She returned in more traditional attire – on Friday, a long black skirt and top and her usual bare feet — then circled the musicians, playing her violin, as the orchestra performed the slow drone of an ancient Byzantine chant.

Two violinists appeared on the ends of the second tier. At the back of the stage, a door opened briefly to reveal another musician playing. Mezzo-soprano Nerea Berraondo, wearing white, glided onstage to sing Schubert’s 1817 lied, “Death and the Maiden,” on which he based his epic quartet; she also sang from the back of the room, her voice seeming to come from everywhere.

The musicians hummed. They nearly danced. Kopatchinskaja is an intensely, unselfconsciously physical player, bowing and swaying, hair flying, feet stamping. Her physicality seems to be catching; the SPCO is more animated in her presence. And their playing Friday was on fire.

We already knew that the SPCO plans to record with its other new artistic partners, clarinetist Martin Fröst and pianist Jeremy Denk, but the disc with Kopatchinskaja – which will be the first SPCO recording since the mid-2000s – was news. That it will be a wholly original version of a popular work says a lot about the orchestra’s creativity, inventiveness and willingness to take risks. We’re eager to hear the final version. Note to SPCO: Please include detailed liner notes. At the concert, Coppock suggested we “just put your programs on the floor and enjoy a fantasy about death that Patricia Kopatchinskaja has created for you tonight.” That was fine for a live performance, but when we listen more closely, we’ll want to know exactly what we’re hearing.

National Poetry Month starts today. Get off on the right foot (<–small poetry joke) by signing up for a Poem-a-Day from the Academy of American Poets. We promise you will only receive good poems. Just one a day.

Tomorrow (Thursday, April 2) at the Best Buy Theater at Northrop: “Martha Graham: In Performance” film screening. If you’re planning to see the Martha Graham dance company at Northrop on April 10-11, or if you’re not, it’s worth watching these three historic performances filmed at the peak of her career. Includes the Peabody Award-winning “A Dancer’s World” (1957); “Night Journey” (1961), Graham’s retelling of the Oedipus legend, with Graham as Jocasta and Paul Taylor as Tiresias; and “Appalachian Spring” (1958). 93 min, in lovely black-and-white. 6 p.m. Free.

Thursday at Urban Olive & Vine in Hudson: Dinner with the Author: Eric Dregni. We love tales of Americans abroad, especially when they’re set in Italy. Determined to go to the place with the best food in the world, Dregni left Minnesota for Italy, where he ended up in a small town called Modena, the birthplace of balsamic vinegar. $15 gets you dinner (a croissant sandwich with soup and salad) and what’s likely to be a very enjoyable evening. Sign up here. 6:30 p.m.

Thursday at the Dakota: Chris Potter Quartet. This booking bounced around the Dakota’s calendar from Jan. 25 to February and now April 2. Let’s hope the third time’s the charm for one of the finest quartets in jazz today. With Chris Potter (saxophone), Adam Rogers (guitar), Fima Ephron (bass) and Nate Smith (drums). 7 and 9 p.m. FMI and tickets ($25/$15).

The weekend and then some

Next Thursday (April 9) at the Ted Mann: P.D.Q. Bach and Peter Schickele Dress Rehearsal. It’s a big birthday year for Shickele, who turns 80 this year, and the famous alter ego he created 50 years ago, the “youngest and oddest” 21st child of J.S. Bach. Tickets to Friday’s concert are sold out, but you can attend the open dress rehearsal the night before, which promises to be a ton of fun. With the VocalEssence Chorus & Ensemble Singers and the University of Minnesota Wind Ensemble. FMI and tickets ($20).