Some of us will spend Easter weekend playing with Peeps. If you’re looking for other things to do, it’s the perfect time to visit the Museum of Russian Art, where 70 Russian Imperial Porcelain Easter Eggs are now on display. Commissioned by the Romanovs as gifts for friends, relatives and courtiers at Easter, these exquisite little objects were produced at the Imperial Porcelain Factory in St. Petersburg during the 19th and early 20th centuries. Some are decorated with images of Russian Orthodox saints, others with imperial monograms, traditional Russian geometric patterns and floral designs. The museum is open daily including Sundays. FMI (location, hours, admission). Opening Saturday: “Romance in Soviet Art,” with 40 paintings on the themes of love and marriage, dating mostly from the 1950s and ’60s.

At Orchestra Hall, Osmo Vänskä launches the Minnesota Orchestra’s “Spirit and Spring” series with three Easter Weekend concerts. On the program: Rimsky-Korsakov’s “Russian Easter Overture,” Vaughan Williams’ “The Lark Ascending,” with concertmaster Erin Keefe as soloist, Messiaen’s “Exotic Birds” and Beethoven’s heroic third symphony, “Eroica,” the latter preview of the orchestra’s fast-approaching trip to Cuba in May. Today at 11 a.m., Friday and Saturday at 8 p.m. FMI and tickets. ($30-$69). Today’s concert is preceded by coffee, doughnuts and entertainment in the lobby and a conversation among a panel of faith and community leaders led by MPR’s Lynn Warfel.

Minneapolis artist Samuel Robertson is illustrating the King James version of the Old Testament in a totally new, utterly unexpected way. (So far, he’s made it through Genesis, Exodus and Leviticus. His plan is to have the whole thing completed by Christmas Day 2016.) Robertson’s illustrations feature cowboys and construction workers, interviewers holding microphones, women wearing bikinis, swimming pools, volleyball nets, rodeos and diners. They crackle and buzz with color. At first, they make no sense at all, but the more you look at them and read the accompanying text, the more convincing they become. Verily, no one has ever seen the Bible as Robertson does. He’ll show the first 46 illustrations at Plot Gallery in Uptown starting Friday, with an opening from 7-11 p.m. The gallery is also open Saturday from 1-7 p.m. and Easter Sunday from noon to 5. Plot is at 1016 W. 27th St., Minneapolis. 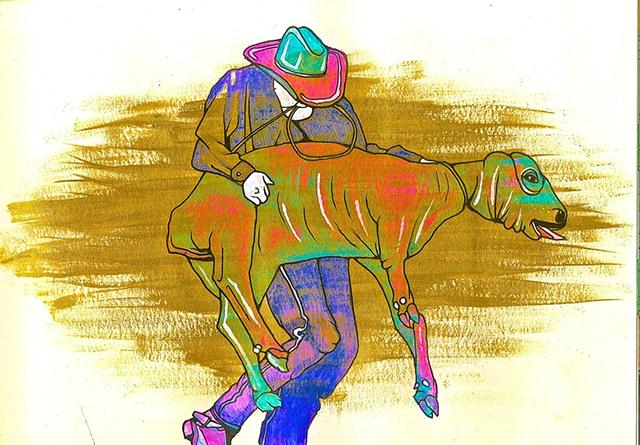 Courtesy of Sam Robertson
(Genesis 1:28) “Be fruitful, and multiply, and replenish the earth, and subdue it: and have dominion over the fish of the sea, and over the fowl of the air, and over every living thing that moveth upon the earth.”

At Heart of the Beast, MayDay Parade workshops start Saturday and continue throughout April. Come in “painting” clothes, bring recycled items if you can (small plastic tubs with lids, brown paper bags, newspapers, fabric, sheets, latex paint, bamboo, scissors), and help make the magic; work on one of the big parade floats or make your own creation, which you can keep after the parade. Artists will guide you. No reservations are required; just show up. FMI and hours.

It is a truth universally acknowledged – except, perhaps, in Indiana’s state legislature – that gay men and straight women make the best friends. “Fruit Fly: the Musical,” which opened Friday at the Illusion, explores that fact with such openness, sincerity and heart that the whole performance seems like a true story. We don’t know if everything in it is true, but we do know “Fruit Fly” is based on the long friendship between its creators and stars, Max Wojtanowicz and Sheena Janson, who first performed a short version at the 2012 Fringe, then expanded it at the Illusion’s Fresh Ink series. 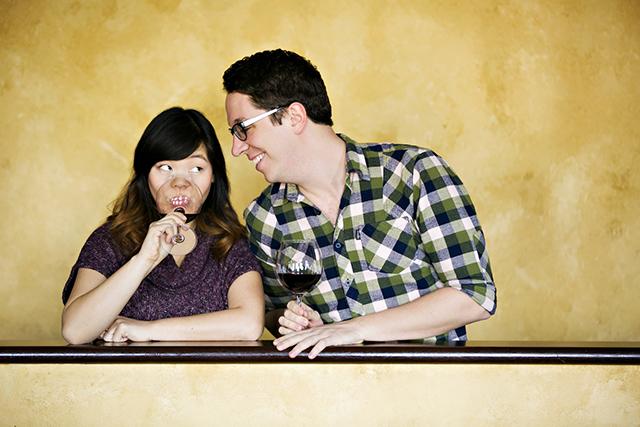 Photo by Lauren B Photography
Sheena Janson and Max Wojtanowicz in “Fruit Fly: the Musical”

“A musical 20 years in the making” — Wojtanowicz and Janson met as kids in community theater in the St. Cloud area — the story of their “lifelong sexless romance” unspools in humorous and touching scenes that progress chronologically from the 1990s to the present and songs that seem organic, as if singing were the most natural thing in the world. The lyrics are clever (when did you last rhyme “femur” and “lemur”?), Michael Gruber’s music is warm and appealing, the Sondheim references are plentiful and the fourth wall is porous. By the end, you want to invite the two friends out for a drink. Directed by Nikki Swoboda, with music direction (and piano accompaniment) by Jill Dawe. Closes April 11. FMI and tickets ($18-$25).

Open now at the Bockley Gallery: “Louise Erdrich: Asynchronous Reading.” The first-ever show of visual art and text by the best-selling, award-winning author (most recently, she won the 2015 Library of Congress Prize for American Fiction) includes paintings paired with boxes of scripts written on birch bark, collage boxes incorporating poetry and prose, and large found-object sculptural figures, along with poetic text and audio by the author. Although Erdrich illustrated several of her own books, she has rarely shared her artwork in public. Wednesdays through Saturdays, noon to 5 p.m. Free. Ends April 18.

Tonight (Thursday, April 2) at the Amsterdam: Composer Conversation with Bryce Dessner. The indie rocker (The National) and respected modern classical composer talks about his compositional approach and pushing musical boundaries. With Caroline Shaw, the youngest composer ever to win the Pulitzer Prize for music, and Richard Reed Parry  (Arcade Fire), another genre-crosser. 7 p.m. Free, but reservations are required.

Thursday through Saturday at the Walker: Abderrahmane Sissako: Africa’s Visual Poet. The Oscar-nominated director of “Timbuktu” is here to present a short retrospective that includes “Life on Earth” (preceded by his short film “October”), “Waiting for Happiness,” “Bamako” and “Timbuktu.” Each screening will be followed by a discussion with a local expert on film and academic faculty member. FMI and tickets ($12/$10).

Friday and Saturday at the Walker: Liquid Music: The Music of Bryce Dessner. Two nights, two different programs. On Friday: Dessner’s “Lachrimae” and “Tenebre” for chamber orchestra, selections from Richard Reed Parry’s “Music for Heart and Breath,” string quartets by Caroline Shaw and the Minnesota debut of Parry’s new band. With the Minneapolis Music Company, featuring members of the SPCO, conducted by Mischa Santora. On Saturday: Dessner’s “Music for Wood and Strings,” written for So Percussion; solo trombone and electronics by Ben Lanz (The National); a work for solo violin and voice by Caroline Shaw; and an array of invented instruments. With So Percussion and Buke & Gase, a Brooklyn-based musical duo known for inventing instruments. Both shows are at 8 p.m. FMI and tickets ($25, general admission).

Thursday, April 9, at Macalester’s Janet Wallace Fine Arts Center: “Fahrenheit 451.” The students of the Theatre and Dance Department explore questions of interfaces between the body, text and technology in a work by Macalester professor Kanta Kochhar-Lindgren and students, based on Ray Bradbury’s dystopic science fiction novel. 7:30 p.m. Also Friday (7 p.m.) and Saturday (2 p.m. and 7:30). Tickets here ($2-$7).

Friday, April 17, at the State Theatre: Steve Winwood. The British rocker rose to fame in the Spencer Davis Group, then co-founded Traffic, then left that to join a new band with Eric Clapton and Ginger Baker – rock’s first supergroup, Cream. After another run at Traffic, he embarked on a solo career in 1977. He’s sung it all – R&B, blues-rock, progressive rock, soul-pop, jazz, psychedelia – in his instantly recognizable, one-of-a-kind voice. And he can sing whatever he wants in his night at the State, as long as his set list includes “The Low Spark of High-Heeled Boys.” 8 p.m. FMI and tickets ($53.50-$63.50).