For Minnesotans, there’s no such thing as too many books. On the heels of last week’s AWP conference for writers, the 27th Annual Minnesota Book Awards gala drew a crowd of 800 to St. Paul’s Union Depot on Saturday. The light shone brightly on local authors, including this year’s winners and the past honorees who presented the awards, blue glass flames made by Minnesota glass artist Dick Huss.

With MPR’s Euan Kerr as emcee and the Willie August Project providing music tailored to each win, the awards ceremony began soon after 8 p.m. and ended before 10. Just long enough, not too long.

Northfield resident Kaethe Schwehn took the award for Memoir & Creative Nonfiction for “Tailings: A Memoir,” published by Cascade Books/WIPF. A professor of English at St. Olaf and mother of two, she thanked her husband, Peder, “who is always asking, ‘How can we make time for you to write?’ ” Writers everywhere will want to clone him.

The Novel & Short Story award went to Marlon James for “A Brief History of Seven Killings,” published by Riverhead Books. The Jamaican-born novelist and Macalester English professor previously won for “The Book of Night Women.” Presenter Louise Erdrich, who holds the record for most Minnesota Book Awards (five so far), joked that “Fiction is without a doubt the most demanding of these categories … this is the most prestigious and difficult of these awards.” James called the awards “a reason to wear a black suit,” then turned serious: “I’m stunned by the breadth of Minnesota fiction,” he said. “It can’t even be defined anymore.” 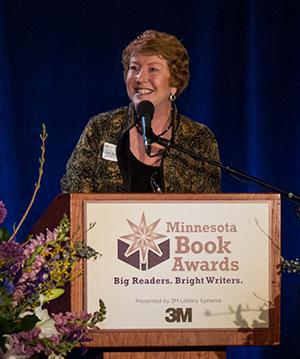 Star Tribune editorial columnist Lori Sturdevant won the Minnesota category and her third Minnesota Book Award for “Her Honor: Rosalie Wahl and the Minnesota Women’s Movement,” published by Minnesota Historical Society Press. She used the podium to call for a third wave in the women’s movement. Her latest book, “Citizen Swain: Tales from a Minnesota Life,” is just out from the University of Minnesota Press, and we can probably expect to see it on the list of finalists for 2015.

Nancy Koester, an ordained Lutheran minister and teacher at Augsburg, won the General Nonfiction category for “Harriet Beecher Stowe: A Spiritual Life,” published by Eerdmans. She had the best thank-you of the night: “I would like to thank my dog. She was a herder and would herd me to my desk.” 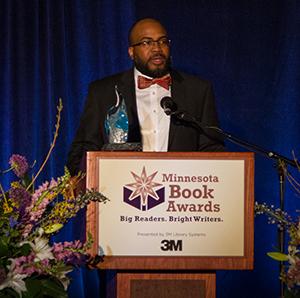 Poet Matt Rasmussen announced that Sean Hill had won this year’s Poetry category for “Dangerous Goods,” published by Milkweed. Rasmussen used what he called his “movie trailer” voice, beginning with “In a world where poetry matters …” A Georgia transplant now living in Bemidji, Hill praised Minnesota for being “rich in literary talent and support for the arts.” He also confessed that “you can’t help but write if you live in Bemidji.”

The winner of the 2015 Minnesota Book Artist Award, announced last December, Harriet Bart quoted French poet and critic Stéphane Mallarmé: “Everything in the world exists in order to end up as a book.” Her winning artist’s book, “Ghost Maps,” a collaboration with Minneapolis printer Philip Gallo and Jacobsen, Minnesota binder Jill Jevne, began with images on a paint-splattered floor. 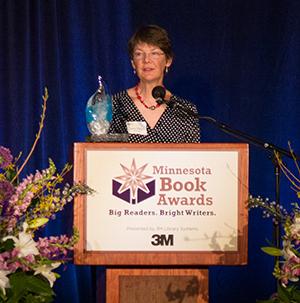 MinnPost photo by John Whiting
Joyce Sidman took the Children’s Literature award
for “Winter Bees and Other Poems of the Cold.”

The award for Children’s Literature went to poet Joyce Sidman for “Winter Bees and Other Poems of the Cold,” published by Houghton Mifflin. The idea came to her when she was walking her dog on a snowy subzero Minnesota day and wondered – how do wild creatures survive our winters? Her book pairs poetry with meticulous research into snakes, voles, bees and chickadees. This was Sidman’s second Minnesota Book Award.

The final award, for Genre Fiction, went to Julie Klassen, whose book “The Secret of Pembrooke Park” was published by Bethany House. Klassen is the author of eight novels, all historical romances.

This year’s Minnesota Book Awards drew 250 nominations. Judges from around the state chose 32 finalists, who were announced in January. An active schedule of readings in metro area libraries kept the finalists in the public eye in the months leading up to the well-attended gala.

Organized by the Friends of the Saint Paul Public Library, the Book Awards have gone through rocky spells since their founding in 1988 but now seem robust, with sponsors for all eight award categories, hundreds of volunteers and financial support, including an $18,000 challenge grant from a Friends’ board member that was announced at the gala. Envelopes on the tables invited contributions.

Store owner Garrison Keillor put up the award money and chose the winners, which were announced Sunday at a celebration of poetry in the Macalester College chapel. Nearly 1,000 poets sent entries and Keillor read them all. You can read the top three winning poems here.

Wednesday at the Museum of Russian Art: A Night at the Opera Featuring Vladislav Sulimsky and Denis Evstuhin. Born in Belarus, schooled at the Rimsky-Korsakov Conservatory in St. Petersburg, the award-winning baritone keeps a busy international schedule; his 2014-15 season includes performances in Vienna, Moscow and Helsinki. It should be lovely to hear him in TMORA’s main gallery, where the current exhibition is “Romance in Soviet Art.” Pianist Evstuhin is artistic director of TMORA’s Music at the Museum series. 7 p.m. FMI and tickets ($30 general admission, $25 TMORA members).

Thursday at Subtext Books: Tom Henninger presents his new biography Tony Oliva: The Life and Times of a Minnesota Twins Legend. Henninger is a St. Paul native, lifelong Twins fan and associate editor at Baseball Digest. He’ll read from his book and sign copies. 8 p.m. Free. On Saturday at 1 p.m., he’ll be at Fair Trade Books in Red Wing; on Sunday at 1, at Barnes & Noble-Apache Mall in Rochester.

Thursday at the University of St. Thomas: Jackie Joyner-Kersee. The winner of six Olympic medals and four world-champion titles, named the Greatest Female Athlete of the 20th Century by Sports Illustrated, Joyner-Kersee will give a talk on “Running the Race with Grace and Humility: On and Off the Track.” 7 p.m. Free and open to the public. Bring a young girl, or several.

At Mill City Nights on Friday, June 26: Esperanza Spalding Presents: Emily’s D+Evolution. Winner of the 2011 Best New Artist Grammy, Grammy-winning bassist/vocalist/composer Spalding has a new project: a blend of music, theater, poetry and movement she describes as evolving along the way. FMI and tickets ($29.95-$59.50).

Correction: An earlier version of this article suggested that MBA winners received only a glass sculpture. This year’s winners each took home a cash award of $500. Plus winners receive cash stipends from libraries around the state for author events.