It’s great when the Minnesota Zoo is full of kids – running down the paths, pressing their little noses against the glass of the big tank in Discovery Bay and the windows at Grizzly Coast, roaring at the tigers and acting like monkeys.

And it’s great when there are no kids at the zoo. Not even babies in strollers. At Adults After Hours, an 18-and-over event last Friday evening, grown-ups carrying cups of wine and beer strolled the exhibits, watched hula dancers and viewed the Zoo’s new inhabitants, five Hawaiian monk seals, among the world’s most endangered creatures.

Prey for sharks in the water and dogs when they haul up on beaches, entangled in marine debris, caught up in fishing gear and cut by boat propellers, with their own food supplies and habitat dwindling, monk seals are so threatened that according to the National Oceanic and Atmospheric Administration (NOAA), around 1,100 remain in the wild. Large (weighing 400-600 pounds), earless, not very graceful on land, monk seals are known as “living fossils” because they have changed very little in 15 million years.

Unless you go to Hawaii, the Minnesota Zoo is the only place you can view monk seals. Under strict regulations, none but those that can’t be returned to the wild may be exhibited in public. Our seals are in their 20s, well past middle age, and four are blind, which is common among the species. Nani, Koa, Ola, Paki and Opua will live out their lives in Discovery Bay, a former dolphin exhibit that recently underwent a multimillion-dollar renovation to prepare for their arrival. It’s hoped that their presence here will raise awareness of monk seals and other endangered species.

On Friday, Ola (the one who can still see, though her vision is impaired) was frisky and curious, tossing a toy around and swimming up to the glass to check out the crowd. Also frisky, though mainly interested in their mothers, were three baby snow monkeys, born April 17, April 20 and May 1.

The Zoo is open at 9 a.m. 363 days a year, closing at 4 p.m. or 6, depending on the day and the time of year. Adults After Hours nights are $10, free to members. We’ll let you know when the next one is scheduled. Or take the kids anytime. Meanwhile, here are more pics from Friday night’s visit.

Two brand-new music festivals had such smashing debuts that both have announced their returns.

The first-ever Twin Cities Early Music Festival took place over a single weekend last September. Having dipped in a toe and found the water fine, it’s expanding to three weeks this year, from Aug. 8 through Aug. 29. Events include a Marketplace Day (Aug. 15) at Hennepin Avenue United Methodist Church, with instruments and builders, an early music CD and performer merchandise market and a showcase of 30-minute mini-concerts throughout the day. A Bach Marathon on Aug. 22 is open to anyone who wants to play Bach on whatever instrument they choose. (Even accordions?) A staged production of Henry Purcell’s opera “Dido and Aeneas” will end the festival.

Concerts are still being added to the calendar, but so far include performances by Lyra Baroque, Eglantine Consort, Col Basso, Dutch Masters, the Wolfgang, Flying Forms, Cerulean Fire, Ladyslipper Ensemble and others. Several musicians are planning “pet projects” – opportunities to try out new ideas or play with musicians coming in from out of town. A Baroque Instrumental Program will give advanced students and young professionals chances to play with and learn from respected international artists. Passes and concert packages are on sale now, if you want to get a jump on things. FMI.

Earlier this year, from April 10 to May 10, the monthlong Northern Voice Festival had a successful launch, with 143 singing events (including two Festival Days, one each in Minneapolis and St. Paul) produced by 81 singing groups drawing an estimated 30,000 audience members to concerts by more than 5,000 artists. Most were self-produced, taking place in venues across the state, with the festival’s online calendar serving as a one-stop-shopping resource. 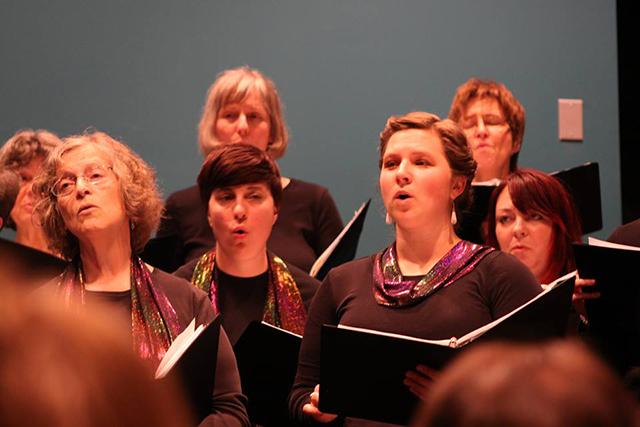 Next year’s dates are April 1-May 1, 2016. Any community choir or singing ensemble in Minnesota, Iowa, North or South Dakota, or Wisconsin may add its public events to the Northern Voice Calendar. There will be three Singing Days produced by Northern Voice: Singing Earth Day (April 23) along the Mississippi River, Singing Day in St. Paul (April 30), and Singing Day in Minneapolis (May 1). Groups interested in those are invited to submit proposals; a lottery will determine which ones get in. The festival is broadening its scope to include sacred singing ensembles, school-sponsored or student-organized groups, spoken word artists and pop/folk/rock groups. FMI.

Tonight (Wednesday, May 27) and Thursday at the St. Anthony Main Theatre: “Slow West.” Director John Maclean, a founder member of the Edinburgh pop-rock group the Beta Band, shot his first film, a short called “Man on a Motorcycle,” in 2009 on his mobile phone. Michael Fassbender starred. Maclean and Fassbender must have gotten along, because the in-demand star (Erik Lensherr in “X-Men,” David in “Prometheus,” cruel Edwin Epps in “12 Years a Slave”) stars in McLean’s first feature, a Western set at the close of the 19th century. FMI, trailer and tickets ($6-$8.50).

Thursday at the Star Tribune’s new HQ: Cuba Photo Happy Hour. A gallery of large-format prints of photographs from the Minnesota Orchestra’s historic trip to Cuba, a cash bar (with mojitos), complimentary Cuba-inspired appetizers, and a chance to visit with Minnesota Orchestra musicians, Star Tribune arts reporter Graydon Royce and photojournalist Leila Navidi, who traveled to Cuba with the orchestra. 650 3rd Ave. S., in the street-level lobby off 3rd Ave. 4:30-6 p.m. Free. The exhibit will be on view through June 5. FMI.

Thursday at the Walker: Superscript Opening Party: “Everyone’s a Critic.” Starting Thursday, the Walker hosts a three-day conference called Superscript: Arts Journalism and Criticism in a Digital Age. We’ll be there, hearing from people who work for publications like Pitchfork and Buzzfeed, Hyperallergic and VICE. The opening party in the Walker’s Cargill Lounge is open to the public and free (as are all Thursday nights at the Walker). 6-9 p.m.

Thursday at Harding Senior High Field House: “Jungle to Jungle.” If you’re intrigued by parkour – an activity/sport/game with its origins in military obstacle course training, in which people (usually young men) seem to effortlessly scale walls, leap across chasms, swing, jump, vault, and roll like characters out of the latest Marvel Comics movie –this is for you. Karen youth (immigrants from southern Myanmar, formerly Burma) will use parkour to tell the story of their journey to the United States. Presented by Dangerous Productions in collaboration with Karen Organization of Minnesota and Fight or Flight Academy, the evening will feature Karen students from Hardin and Como Park high schools. 1540 6th St. E, St. Paul. 7 p.m. FMI. $5 suggested donation at the door.

The Summit Avenue Walking Tours are back. Every Saturday and Sunday through September (including July 4), guides from the James J. Hill House will lead 90-minute walks along one of America’s great streets, highlighting the Gilded Age mansions and the people who owned them and built them. Take a scenic stroll; learn a little something about architecture, social history and current preservation issues. Tours cover 1.5 miles starting at the Hill House and ending at the Cathedral of St. Paul across the street. FMI with link to calendar and reservations ($12 adults, $10 seniors/college students, $8 ages 6-17, $2 discount for MNHS members). 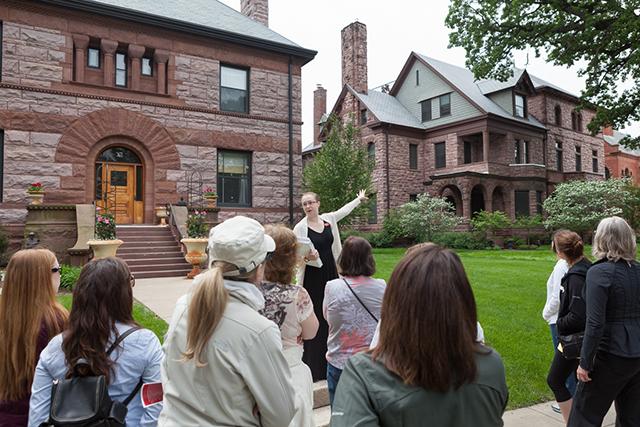 Courtesy of the Minnesota Historical Society
The Summit Avenue Walking Tours are back.