Barely unpacked from its history-making Cuba tour, the Minnesota Orchestra had more good news Tuesday after a board meeting.

Osmo Vänskä will stay on as music director at least through August 2019. Well in advance of when their current contract was due to expire on Feb. 1, 2017, the musicians have signed a new agreement that takes them through the 2019-20 season. And the orchestra has received $6.5 million in new gifts.

What a difference 16 months can make. Not the 16-month lockout, but the 16 months since the end of the lockout in January 2014. New leadership, new openness and new attitudes have led to what clarinetist Tim Zavadil, chair of the musicians’ negotiating committee, called “a real vote of confidence in the future direction of the orchestra.”

Orchestra President and CEO Kevin Smith, who was greeted with applause and bravos at a press conference Tuesday afternoon, shared further details about the contracts and the gifts.

The agreements with Vänskä and the musicians were announced simultaneously because “they are absolutely interconnected,” Smith said. “In order to build a musical legacy, you have to have a music director and you have to have an orchestra, and we want to make sure we have both and they’re in sync.”

Vänskä will spend a minimum of 12 weeks each season leading the orchestra, two weeks over the 10 in his current contract.

“He wants to make a point of being here with us as much as possible,” Smith said. “He came back to build this orchestra, and now that they are really getting back into the swing of things, this is his priority and focus.”

(Vänskä was not at the press conference Tuesday because “he returned from Cuba on Sunday and on Monday left for Amsterdam for a conducting engagement that was long planned.”)

Sealing the musicians’ new agreement now has advantages. “It basically relieves any pressure or uncertainty about where we’re going,” Smith said. “It provides not only a solid financial platform but also a platform to pursue our artistic goals.” Over the term of the new 3½-year contract, the musicians’ minimum weekly salary will increase by 8 percent, from $1,967 in 2016-17 to $2,127 by the end of the 2019-20 season, easing some of the sting of the 15 percent pay cut they took in 2014. The number of full-time players will increase from 84 in 2016-17 to 88 by 2020.

Work-rule modifications were made that allow for more flexibility in scheduling rehearsals, touring and educational outreach concerts. A new provision allows musicians and management to work beyond the rules of agreement without concern about setting precedents “that may come back to bite us later on,” Smith said. “Getting to Cuba required a whole lot of rule-breaking and working outside the contract. What we want to do moving forward is try new things. We don’t want to change a lot of work rules because we don’t know exactly what we want to try. … If we collectively decide we want to do something, let’s not let anything stop us.”

The $6.5 million in new gifts will come from two sources. Douglas and Louise Leatherdale are giving $5 million over the next five years to create the Douglas and Louise Leatherdale Music Director Chair in honor of Vänskä to support his vision for the orchestra, which includes touring, recording and artistic growth. A $1.5 million gift from Betty Jayne Dahlberg will help support the musicians’ agreement. “Both gifts go toward operations,” Smith said. “They are not endowment gifts.”

The new contracts were negotiated privately among staff and musicians, with no press, attorneys or board members present. “I think it’s a great way to negotiate,” Smith said. “Small and informal and quiet.”

Zavadil agreed. “We came into this process very receptive to what Kevin was proposing: that it would be quiet, very collaborative and very open. That’s the way it went. As the process went along, we became more comfortable with each other. We were able to speak more and more freely, and that is what has enabled us to get here today.” 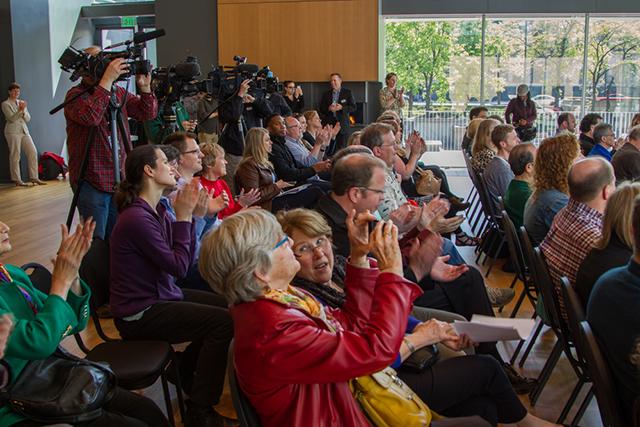 MinnPost photo by John Whiting
The news was greeted with applause and bravos Tuesday afternoon.

Thursday at the Walker: Motionpoems. Novels are made into films, comic books are made into films, rides at Disney theme parks are made into films. Why not contemporary poems? Poet Todd Boss’ wish to have his own poems animated led to the founding of Motionpoems with filmmaker Angella Kassube. Indie filmmakers produce professional-quality, big-screen, high-definition shorts that treat poems like scripts. Some are mysterious, some are touching, some are drop-dead gorgeous. Season 6 is a partnership with VIDA: Women in Literary Arts, and all the poems are by women. The animated version of Ann Eichler Kolakowski’s “Triolet for Laika, First Dog in Space” is a little heartbreaker. Hosted by Boss and MPR’s Stephanie Curtis, 14 short-shorts will have their world premieres at two screenings in the Cinema: 6 p.m. and 8 p.m. The 6 p.m. screening is followed by a panel discussion with poet Kim Addonizio, filmmaker Ayse Altinok and producer Amanda Miller. Get free tickets in the Bazinet Lobby starting at 5. Or make advance reservations here. 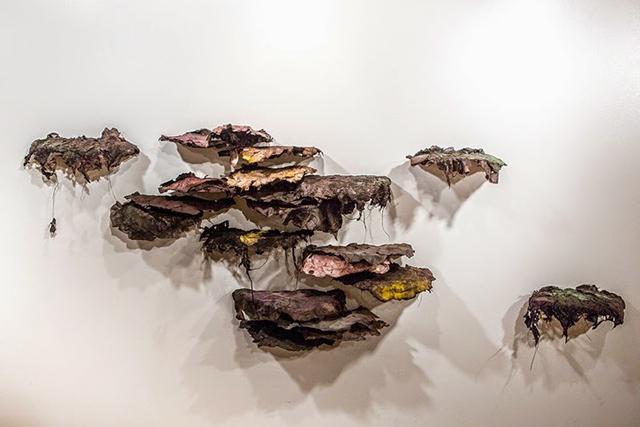 Thursday at TuckUnder Gallery: Opening night for “Jamie Winter Dawson: Inimitable Remains.” Minneapolis artist Dawson studied biology, genetics and fine art at the U; her work has been shown at the Soap Factory, Science Museum, Nash Gallery, and SooVAC. This will be an exhibit of site-specific installations. Also at TuckUnder: “Michael McGraw: Portraits & Judgment,” with photography by McGraw. The gallery is named for its own site-specific location: in a tuck-under garage in a home in southwest Minneapolis, near 50th and France. 5120 York Ave. S. 6-9 p.m. Free. 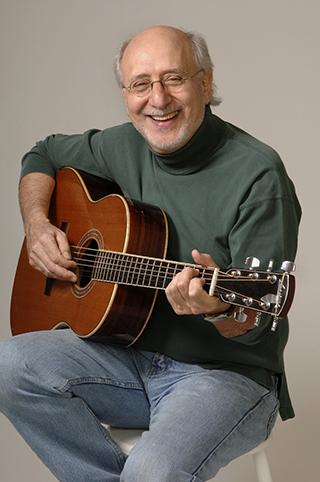 Thursday at the Ames Center: Peter Yarrow. An evening of music and conversation with the folk singer/songwriter and former member of the beloved and influential Peter, Paul and Mary. Since Mary Travers died in 2009, Yarrow has carried on the legacy in live performances (some with Noel Stookey, the trio’s Paul), in a series of children’s books, and in his work for Operation Respect, a nonprofit Yarrow co-founded with educator Dr. Charlotte Frank. Expect to hear “Puff, the Magic Dragon,” a song Yarrow has said (over and over again) is so not about marijuana. 7:30 p.m. FMI and tickets ($43).

Saturday at Minneapolis Pioneers and Soldiers Memorial Cemetery: Cinema in the Cemetery. A screening of Buster Keaton’s film “The Navigator,” with a live score by local music group Dreamland Faces. We have a soft spot for films with live music, especially live original scores. A screening in a historic cemetery is icing on the cake. (Did you know that Pioneers and Soldiers, formerly Layman’s, is the oldest existing cemetery in Minneapolis? We didn’t.) This annual benefit supports the Friends of the Cemetery’s efforts to restore the limestone pier fence that borders the cemetery along Lake and Cedar. The film and music start around 8:30 p.m., but you can come at 7 to explore and take part in a smartphone history hunt. Bring blankets and lawn chairs; no alcohol, pets or recordings allowed. 2925 Cedar Ave. Tickets online or at the gate ($10, cash only). 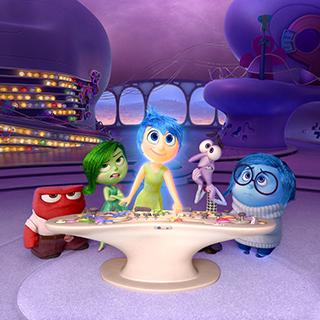 Courtesy of Disney•Pixar
Pixar’s new animated film “Inside Out” is winning raves at Cannes.

Pixar’s new animated film “Inside Out” is winning raves at Cannes. From the Washington Post: “The bright, wildly inventive, deeply felt exploration of the complicated way feelings, memories and dreams inform our personalities won over nearly everyone who packed the elegant main venue at the Grand Palais, bringing the crowd to cheers, tears and more cheers during an exceptionally witty end credits sequence.” OK, we really have to see this. And we can even see it in a Cannes-y sort of way. On Tuesday, June 16, three days before the film opens nationwide, it will be screened in select movie theaters. The one-night event also includes behind-the-scenes footage, a new Pixar short, and a Q&A with director Pete Docter, producer Jonas Rivera and actor Amy Poehler (the voice of the character Joy), live via satellite from their Australian tour. Plus there’s swag: a commemorative poster and lanyard with a code for access to digital extras. 6 p.m. FMI and tickets (you’ll enter your ZIP code).