“Summertime,” a show opening tonight at the Minnesota Museum of American Art, is a chance to store up visual memories for when the snow flies again. Drawn from the MMAA’s permanent collection, joined by the work of three more local artists, this exhibition of paintings, prints, photographs, videos and works of craft celebrate the season that’s especially precious to us northerners. 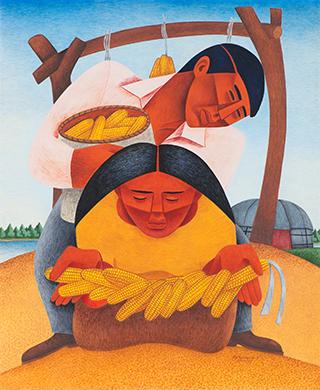 On Saturday, May 23, John Marshall, whose “Skyride” is part of the show, will lead an art-making workshop on non-silver photographic processes. Come and create your own cyanotype. 12 p.m. $5 materials fee. Registration required.

The “Pillsbury’s Best Flour” sign will shine again. Restoration of the iconic sign in the Saint Anthony Falls Historic District has been completed by Lawrence Sign in St. Paul. Sometime this summer, the Plymouth-based developer Dominium, who turned the Pillsbury A-Mill site into artists’ lofts, will flip the switch. The 30-foot sign has stood atop the A-Mill since about 1940. Time and the Minnesota weather had taken their toll. With newly fabricated aluminum and LED lights, it should be good for at least another 75 years. 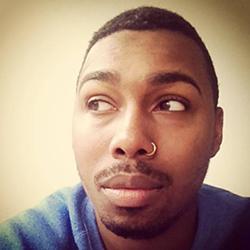 Minneapolis-based Coffee House Press can claim its second PEN Literary Award. Poet Saeed Jones has received the $5,000 Joyce Osterweil Award for Poetry for his debut collection, “Prelude to Bruise.” Saeed’s book was also a finalist for a National Book Critics Circle Award earlier this year. The Osterweil is given to “an emerging American poet showing promise of further literary achievement.” (P.S. Jones, who lives in NYC, is BuzzFeed’s literary editor.) Here’s the complete list of PEN winners. In 2005, Coffee House author Lolita Hernandez won a PEN for “Autopsy of an Engine.”

The National Endowment for the Arts’ Spring Grant Announcement included good news for several Minnesota arts organizations and agencies. Nearly $3 million was awarded in 22 grants, with the largest dollar amounts going to Arts Midwest ($1,409,700) and the Minnesota State Arts Board ($741,100). Twin Cities Public Television receives $75,000 for “TV Takeover,” Public Radio International $70,000 for “Studio 360 with Kurt Anderson,” the City of Minneapolis $50,000 to support an arts-based community engagement program, the Minnesota Orchestra $50,000 for a week-long festival in Detroit Lakes, and Pillsbury House Theatre $50,000 for its Chicago Avenue Project. Other grantees included the James Sewell Ballet, Cantus, Interact, the Loft, MIA and Ten Thousand Things.

If you have a great idea for the arts in St. Paul, you have until Monday to enter the Knight Arts Challenge and maybe win a share of the $1.5 million the Knight Foundation really, really wants to give away. You can do this. FMI.

Tonight (Thursday, May 14) at the Dakota: Eric Bibb. The godson of Paul Robeson, blues singer Bibb is special — beautiful, soulful and sincere. Hearing him sing and play makes you a better person. Here’s a taste. 8 p.m. FMI and tickets ($25-$30).

Tonight at the Trylon Microcinema: “Vertigo” 70MM. Because television is not the same as a movie screen, and digital is not the same as film, the 7:30 showing of this Hitchcock classic starring James Stewart and Kim Novak sold out. Happily, the Trylon added a second screening at 9:50. Here’s your chance. FMI and tickets ($10).

Starts Friday at the St. Anthony Main Theatre: “I Am Big Bird.” Meet the man behind the feathers. Now 80 years old, Caroll Spinney has been Big Bird (and Oscar the Grouch) on “Sesame Street” for the past 45 years. He’s the last of the original “Sesame Street” puppeteers. We’re getting a little teary-eyed just writing this. FMI and tickets ($6-$8.50). Ends next Thursday, May 21.

Friday and Saturday at Open Eye Figure Theatre: “Chopin’s Heart.” In 1939 Warsaw, a group of cabaret artists struggle to establish a new club on the eve of World War II. Nautilus Music-Theater’s production features Sasha Andreev, Norah Long, Dennis Curley and Jennifer Grimm, with a seven-piece cabaret orchestra led by Dan Chouinard. This performance includes the complete score, excerpts from scenes, and narrative material based on the book. With music and lyrics by Gary Rue, book and additional lyrics by Daniel Pinkerton. 7:30 p.m. FMI and tickets ($25). 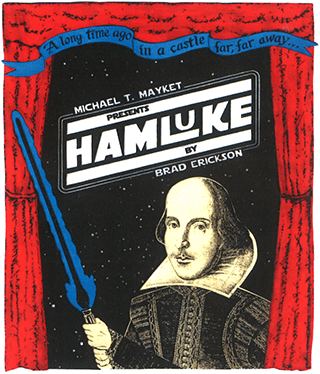 Friday through Sunday at the Phoenix: “Hamluke.” Working under the assumption that everything is better with “Star Wars,” Dana’s Boys (Brad Erickson and Michael Mayket) have turned “Hamlet” into hilarity, retelling the Bard’s tragedy with wookiees, droids, Jedi knights and Ghosty Wan Kenobi. May the farce be with you! 7:30 p.m. Friday and Saturday, 2:30 p.m. Sunday. FMI and tickets. This is closing weekend for what started as a 2011 Fringe hit.

Tuesday at the Ordway: Joyce DiDonato and David Zobel. Born in Prairie Village, Kansas, mezzo-soprano DiDonato is a star on the world’s opera and concert stages, a Grammy- and Gramophone-winning artist beloved for her many recordings and her luminous, joyous performances in operas by Rossini, Mozart and Handel. We’re lucky with a capital L to see her in recital with French pianist David Zobel, her frequent accompanist. What a way for the Schubert Club to end its 2014-15 International Artist season. A limited number of tickets are still available. 7:30 p.m. FMI and tickets ($26-$70, $16 for standing room). Here’s a video from the 2012 Grammy Awards.