During its 2014-15 season, Cantus sang its last “All Is Calm,” about the Christmas truce in no man’s land during World War I; a program of anthems expressing emotion, identity and pride; and songs that helped the people of Estonia, Lithuania and Latvia gain their independence from the Soviet Union.

Singing about such solemn topics is serious business, and the Twin Cities-based, full-time professional men’s vocal ensemble does it exceptionally well. (Full-time means its members have 52-week contracts, regular paychecks and benefits, something only one other men’s vocal ensemble in the States can claim: San Francisco’s Chanticleer.) So it’s fun when they let down their hair for a night of not-so-serious music in their annual end-of-season “Covers” concert of pop tunes. Although for this well-groomed bunch, it’s less about hair, more about untucking a shirttail or two and wearing sneakers instead of dress shoes.

Opening last weekend, continuing through this weekend, “Covers” is a joyous evening of songs you mostly know, in arrangements (by the singers themselves) that showcase their marvelous voices and exquisitely stacked, interlocking harmonies.

Starting with Queen’s crowd-rousing “Don’t Stop Me Now,” they varied moods and tempos, introducing Paul Simon’s “American Tune” with the venerable Lutheran hymn “O Sacred Heart, Now Wounded” (which Simon based his melody on), eliding into a Michael Jackson medley, taking us into calypso land with “Jump in the Line,” made famous by Harry Belafonte, mugging their way through “All About That Bass” (with more than minor alterations to the original lyrics), wrapping things up with Stevie Wonder’s “Superstition.” In between were more songs including the beautiful “Honeybee,” originally sung by a group called Steam Powered Giraffe (huh?), into which we could swear Cantus wove a bit of Tuvan throat singing.

The singers were backed by an excellent band: fiddler Jake Armerding, a hit last year and back for more; Dave Hagedorn on vibes and percussion; David Schmalenberger on drums; Jeremy Boettcher on bass; and Lee Blaske on keyboards and the giant contrabass clarinet. He played that one wearing immense sunglasses. (Later he told us on Facebook that “if you have the right mouthpiece and reed, the contrabass clarinet is really easy to play.” Easy for you to say, Blaske.) Members of Cantus showed off their own skills on guitars and brass including French horn. Good times.

Three Cantus members are moving on: Aaron Humble and Shahzore Shah after 10 seasons each with the group, tenor Blake Morgan after one (Morgan is jumping ship for Chanticleer). Three new tenors are already in place. Cantus has nine members, Chanticleer 13, so these are rare and sought-after jobs.

The 2015-16 Cantus season, which opens in early October, was announced late last week. “The Four Loves” (Oct. 8-18) looks at romantic, familial, friendly and unconditional love with new works commissioned from Pulitzer Prize winner David Lang, former Sweet Honey in the Rock member Ysaye Barnwell, Roger Treece and Joseph Gregorio. “Christmas With Cantus” (Dec. 10-19) grows to seven performances including concerts in Edina and Apple Valley. “Would You Harbor Me?” (April 7-17, 2016) gives voice to personal stories of crisis, homelessness and isolation, along with resilience, belonging and community. A new “Covers” (June 3-11) brings the season to its happy close.

Rain is the bane of outdoor summer festivals on the plains, and Northern Spark paid in full last year, when a two-fisted storm forced the closure of many outdoor events. There were still plenty of things to see and do indoors, but getting from place to place was a drag. We were cowards, dashing from the Convention Center to Orchestra Hall, ending up at the Walker for part of Christian Marclay’s “The Clock” before slouching home.

The weather for Year Five of the free all-night arts festival, which starts Saturday (June 13) at dusk and ends at dawn, looks a bit iffy, but we’re not going to dwell on that. Instead, we’re going to suggest a dozen-plus-one events worth staying up super-late for. They are listed in chronological order, but this is not a schedule. Some events overlap and we can’t help that.

Our picks are a fingerful of frosting from the cake. You’ll want to study the friendly, well-organized website and see what entices you. (Create your own My Night schedule on your computer or smart phone.) There’s a lot to choose from, with six main locations spread out across Minneapolis (west to east, loosely: the Walker, MCAD and the MIA, Peavey Plaza, the Minneapolis Convention Center, Mill City and West River Parkway, and the U’s Weisman, Northrop and Bell), over 200 participating artists, and more than 70 unique events.

Almost everything will be something you haven’t seen before and won’t see again. Watch, listen, join in and enjoy the rare experience (for most of us, at least) of being out and about in the city at night.

8:30-10 p.m. on the Convention Center Plaza: A welcome from Mayor Betsy Hodges. The unveiling of mini_polis, the collaborative, interactive sculpture that won this year’s Creative City Challenge. A live concert by Duluth-based chamber rock band Cloud Cult, to be filmed by TPT for an upcoming episode of “Lowertown Line.” A big start. 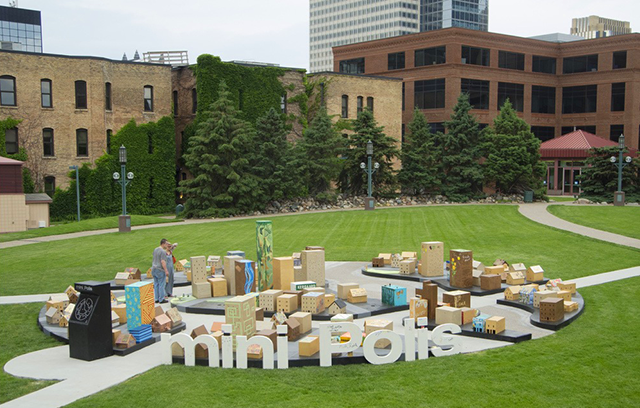 9 p.m. – 2:30 a.m. in the Convention Center: Andy Sturdevant: Footpaths ’92: A Spiritual Health and Psychic Wealth Expo. In the guise of self-help guru “Dr. Ross Ruprecht,” writer and artist Sturdevant (who writes MinnPost’s “The Stroll”) leads a nationally touring, pre-Internet seminar on meeting the psychic and personal wealth challenges of the 1990s and beyond. We’re mystified, too, but we trust Andy.

9:05-11:30 p.m. in the Mill City Ruin Courtyard and Rail Corridor: Mill City Summer Opera Next: Opera Redux. The stars of this summer’s production of “Daughter of the Regiment” present popular opera arias and scenes, with a twist. Includes a spin on Stephen Sondheim’s “Comedy Tonight” (renamed “Opera Tonight”) from “A Funny Thing Happened on the Way to the Forum.”

10 p.m. – midnight at the Walker: Michael Friedman: Martian Dawn. A trio of novels inspires six short plays about stardom, sci-fi, murder and more. In the galleries.

10:15 p.m. at Orchestra Hall: From Amber Frozen. Four members of the Minnesota Orchestra (Cecilia Belcher and James Garlick on violin, Sam Bergman on viola, Pitnarry Shin on cello) play music by composer and DJ Mason Bates. This won’t be Sibelius, Mahler or Beethoven.

9 p.m. – 5:26 a.m. (all night) on West River Parkway: E/x MN. Rained out last year, Luke Savisky’s giant light sculpture projects audience members (including you, if you want) onto the silos of the Gold Medal flour mill, to an ambient soundtrack. A quintessential Northern Spark event.

All night in the Best Buy Theater at Northrop: Sumunar Gamelan and Dance Ensembles. A live performance of traditional and contemporary Javanese gamelan music. The first half of the evening includes dance.

All night in Conference Room 106 at Northrop: Mary Ellen Childs: Ear and Nose. The Twin Cities-based composer has been exploring what happens when you pair music with specific scents. (Hint: it alters your experience of both.)

All night in Mill Ruins Park: The Night Library. An interactive maze behind a library façade. Take a book and flashlight, then try to get your book onto the library shelf, battling the villains of censorship along the way. The artists who made this are Julian McFaul and Mark Safford. Sounds weird, could be fun.

All night at the Mill City Museum: MSR Design: Top of the Mill to You. A lot of people are talking about this. It seems MSR, an architecture firm with offices on the Museum’s eighth floor, has a balcony with great views of the ruins and the river. Here’s your chance.

Finally, if you run the whole 8½-hour nuit blanche marathon, you might as well drag your sleep-deprived, overstimulated self to the Northern Spark Pancake Feed at Aria, which starts at 5:30 a.m. That you’ll have to pay for: $5 in advance, or $25 at the door. Presented by The Bachelor Farmer and Al’s Breakfast, with coffee from Dogwood Coffee, complete with film screenings, live music and a DJ because this is not a church breakfast, boys and girls, this is Northern Spark.