There’s a surprising amount of vacant real estate along Hennepin Ave., but you wouldn’t know it, thanks to “Made Here.” A project of Hennepin Theatre Trust, with support from Andersen Windows, it fills empty storefronts with stop-and-look work by local artists.

True, the more inviting Hennepin Avenue is, the more people will come to shows at the Trust’s four theaters: the Orpheum, the State, the Pantages and the New Century in City Center. But “Made Here” is more than just another PR stunt. It feels made by people who are invested in our community and genuinely want to improve it, and not only for their own benefit. It’s public art with heart.

“Intersections: Made Here” launched Wednesday with a party at Burnet Gallery. The event was planned for outdoors in Marin’s courtyard but moved inside because of rain. The weather broke enough for bus and walking tours of 30 window “showcase” displays by more than 60 artists, most spread out along Hennepin from 10th St. to 4th St., with other locations on LaSalle and North 8th.

Two new artist-designed Parklots – temporary parks – opened near the IDS Center and on Peavey Plaza. (Bank of America, new to Minnesota, is supporting the parklots.)

“Intersections” is the latest iteration of an ambitious venture that began in spring 2013 with a single window in the Witt Building at 705 Hennepin displaying locally made custom furniture. Called “Guerilla by Design,” it was, in the words of Joan Vorderbruggen, “a good start and an initial foray … a placeholder for what was to come.”

Vorderbruggen, an artist and organizer, has a thing about putting art into desolate spaces. She created the award-winning “Artists in Storefronts” project to address the problem of dark, empty windows in her own Whittier neighborhood. That led to “Made Here” and a job with Hennepin Theatre Trust as Culture District Arts Coordinator.

After “Guerilla by Design” came Block E, back when it was a big, ugly, mostly abandoned box. She filled 40 vacant windows with visual displays. A poetry contest put poems on retired marquees, and curated music played through exterior speakers. “It was an awesome time,” Vordebruggen said.

After Block E, Andersen Windows signed on as presenting sponsor – one of the most beautifully logical partnerships ever – and the first official “Made Here” opened last July with 40 windows over 16 city blocks. The first Parklot sprouted beside the Orpheum. Thinking outside the windows, Vorderbruggen invited a team of women artists to create “Pedalstar Galactica,” a bicycle-powered kinetic sculpture. A vacant commercial space in City Center hosted a series of figure drawing classes. Artist Ta-coumba Aiken spent a week painting in the City Center atrium, with live music during the lunch hour.

“Made Here” had gotten big. Vordebruggen convened a panel of artists and arts professionals to curate and advise. By Black Friday 2014, a new show was up and ready. The illuminated windows of “Brilliance! Made Here” were deliberately anti-commercial yet nostalgic, a reminder of the days when downtown department stores decorated their windows for the holidays.

With “Intersections,” “Made Here” expands to alleys, large-scale murals, a gallery of artists’ work in the new Mayo Clinic Square, a pop-up gallery in The Third Bird restaurant in Loring Corners, fence wraps around new construction and an artist-in-residence.

For “Brilliance!,” artist Erik Pearson created a papier-mâché tightrope walker for City Center. The property managers wanted more. So they’re footing the bill for him to create three more circus characters over the summer. “He’s the first artist-in-residence, but he won’t be the last,” Vordebruggen said. 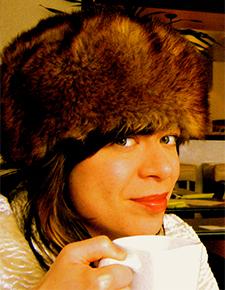 Participating artists in “Brilliance!” were asked to work with light. For “Intersections,” they were asked to “intersect” ideas or mediums in creative ways. “The theme is intended to explore the creative possibilities when different art forms, people and ideas come together.” Showcases include photographs, graphic art, paintings, installations, videos, projections, textiles, drawings and fiber art.

Diversity and inclusivity are priorities. “It was clear early on that this public art project must reflect the community it serves,” Vordebruggen said. “Our panel set ambitious standards to host a minimum of 40 percent artists from communities of color while maintaining gender equity and an equal number of men and women. We have upheld those standards and even exceeded our goals. … With ‘Intersections,’ social justice has made an amazing show of force, with two transgender showcases and three displays featuring homeless issues.

“We understand that our efforts aren’t solely about decorating the downtown cultural district. We put a premium on allowing a stage for artists to create a forum for discussion about the issues our communities face.”

There’s also a business side to “Made Here.” Every participating artist is paid, with money from the McKnight Foundation. Showcases help potential customers find artists; over the past year, “Made Here” artists have sold $14,000 worth of work, and no, the Trust doesn’t take a cut. Professional photography, marketing and promotion are part of the deal; all of the artists are featured on the dedicated website. “We want our artists to sell their work, and we encourage it at every turn,” Vordebruggen said.

Plus filling vacant storefronts with art draws attention to available spaces. In 12 months of participating in “Made Here,” five commercial spaces with a combined vacancy of more than 35 years were leased. Keep that up and “Made Here” might become obsolete.

“Intersections: Made Here” will be up through Sept. 30. See it whenever you want. Visit the website to learn about the artists, view a map and download a walking tour guide.

At the Soap Factory: “Wise Blood.” Quick quiz: “Wise Blood” is a) a novel by Flannery O’Connor, b) an art installation by visual artist Chris Larson (who built a full-scale replica of a house by Marcel Breuer, then set it on fire during Northern Spark 2013), c) an opera by composer Anthony Gatto, d) a live performance during which the audience follows the action from gallery to gallery, e) a revelation (not to get too biblical about it), f) all of the above.

Hint: f). We were a bit dubious when we arrived at the preview on Wednesday. Would it be weird? Pretentious? Baffling? Boring? None of the above. Larson’s shattered, vertiginous sets, Gatto’s ominous, New Orleans-inspired music (and the ability of the 13-piece, mostly brass Adam Meckler Orchestra to play it), Michael Sommers’ masterful direction (Sommers is the founder and co-director of Open Eye Figure Theatre), and a terrific cast delivered a seductive 90-plus minutes of something new and thrilling. 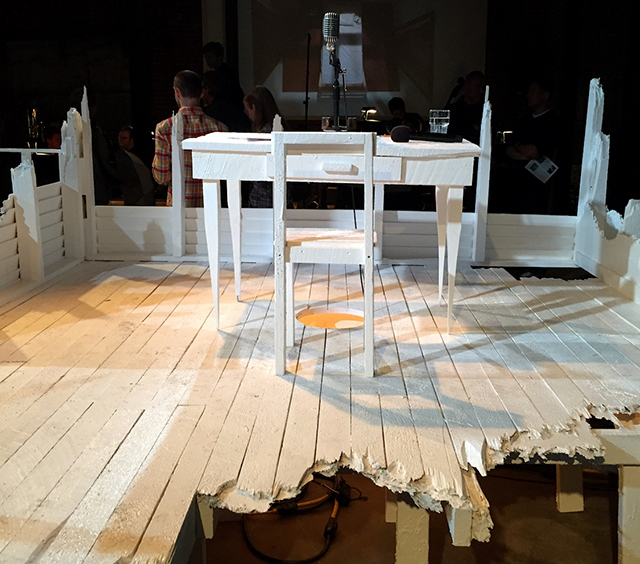 O’Connor’s 1952 Southern Gothic novel is a darkly comic, satiric and tragic tale of Hazel Motes, a shell-shocked World War II veteran who preaches against religion. Sommers makes good use of the Soap Factory’s spaciousness, roughness and chameleon nature, leading us from room to room, rolling a train down a track and a car over a hill. Opera singers Martin Bakari (tenor) and Brian Major (baritone) sing the main male roles, indie-pop artist Holly Hansen (of Zoo Animal) and soprano/experimental singer Gelsey Bell the main female roles, and David Lee Echelard, wearing a spangled suit and playing a hurdy-gurdy, is a medieval music specialist and countertenor who can sing soprano (which vastly oversimplifies his astonishing voice). Actor Jason Paul Andrews is Enoch Emery, the “wise blood” of the title, so he’s key. Plus he changes heights and eventually dons a gorilla suit.

Oh, just go, if you can get in. FMI and tickets ($40). Tonight (Friday, June 5) through Sunday, then next Thursday-Sunday (June 11-14). 8 p.m. Walker members, buy your tickets here and save $5. Meanwhile, if you want to hear a bit of Gatto’s music (played by the New Thread Quartet, with Gelsey Bell), you can.

Saturday at Studio Z: Vector Families. A high-voltage, electro-acoustic band with Dean Granros on guitar, Brandon Wozniak on tenor sax, Anthony Cox on bass and cello, and newly minted McKnight Composer Fellow Dave King on drums. 7 p.m. Tickets here ($10) or at the door. (PBR Street Gang is the former name of this group. Why the change? We don’t have a clue.)