The new da Vinci and Mark Mothersbaugh exhibitions at the Minneapolis Institute of Arts are not, in fact, two separate shows. They are one.

Spread among 13 galleries, centuries apart, “Leonardo da Vinci, the ‘Codex Leicester,’ and the Creative Mind” and “Mark Mothersbaugh: Myopia” are running concurrently. MIA has positioned them as complementary and thematically linked, an ambitious, borderline loony notion that makes perfect sense after you’ve seen both. Before, it’s like – riiiight. The Devo guy and Leonardo have something in common? As if, MIA.

But they do. Do they ever. It’s called creativity. Which is what both shows are really about and both artists had (have) in mind-boggling abundance. Creativity is what connects the Renaissance master and the modern-day musician, composer, and visual artist. As you go from one exhibition to the other, that becomes clear as day.

“I’ve heard it said that creativity is the most important resource of this current century,” Alex Bortolot, the ‘Codex’ curator, told a preview crowd Thursday. “It’s going to save us as a planet. Understanding how it works, how it manifests itself and the conditions through which it happens is an exciting opportunity for the museum to play a new role in our community.”

The “Codex” show “is not the ‘Mona Lisa,’” Bortolot said. Instead, it’s “the mind behind the ‘Mona Lisa.’” The “Codex” is essentially a notebook in which da Vinci recorded, developed and sketched his ideas about the properties of water. Writing in mirror script from right to left across the page (not, Bortolot explained, because he was being secretive, but because he was a lefty keeping his sleeve out of the ink), da Vinci put his thoughts into words. Sketching made abstract ideas more concrete.

The exhibition gives you the full impact of being around what Bortolot termed “a document full of aura” — and worth well over $30 million, which explains the MIA’s beefed-up security. (The “Codex” is on loan from Microsoft founder Bill Gates.) Pages are displayed in low light in specially designed cases made in Milan. Labels spotlight features and sketches that clue us into da Vinci’s thought process. The MIA calls the sketching “thinking on paper.”

The first four galleries of “Codex” are given over to the star manuscript. The other three feature modern-day examples of creativity, complete with notebooks and sketches — more thinking on paper. Ideas for children’s car seats by a St. Paul-based industrial design firm. Drawings and prototypes by Scott Olson, the inventor of Rollerblades. The mysterious and beautiful “Crochet Coral Reef,” a participatory art and science project based on hyperbolic geometry, whatever that is.

The profound and confounding finale to “Codex” is artist Bill Viola’s HD video and sound installation “The Raft,” in which people are pummeled by jets of water from high-pressure hoses. Shot in 35mm high-speed film and slowed to reveal individual droplets, it makes us all Leonardos, observing water, studying its effects. iPads show the notebook Viola used to plan the piece.

You can let “The Raft” blast you out of “Codex” into “Myopia,” located one gallery over. Though if you see both shows in one day, your head might explode.

Until “Myopia” opened in Denver (after Minneapolis, it travels to Cincinnati, Austin, Los Angeles and New York), no one had ever organized a large-scale retrospective of Devo co-founder Mark Mothersbaugh’s visual art. That wasn’t Adam Lerner’s plan in 2011, when he first met Mothersbaugh. Director of the Museum of Contemporary Art Denver, where the show originated, Lerner had arranged to interview Mothersbaugh about another artist.

“Within fifteen minutes of speaking with him,” Lerner said, “I had this very strong feeling that this was the most creative person I had ever met … that, in fact, he may be one of the most important creative forces in our culture for the past forty years. … It was amazing to me that nobody had told his story, that no museum curator had thought it was appropriate to make him part of our history.”

Lerner threw himself into the task — and into “four storage spaces filled with artworks, journals, postcards, scraps and souvenirs he’s collected over the years.” He found the key to the show in a journal Mothersbaugh wrote in 1971, when he was an art student at Kent State. “He elaborates the idea of what it means to be an artist,” Lerner said. “It’s not about making an extraordinary object, but about living a creative life.”

It’s hard to imagine a more determinedly creative life than Mothersbaugh’s. Each day since the 1970s he has made hand-drawn postcards in pen and ink — nearly 30,000 to date. In the MIA show, curated by Christopher Atkins, an entire gallery is devoted to postcards, arranged in albums on long, low tables near the floor, so you have to bend or sit to turn the pages. 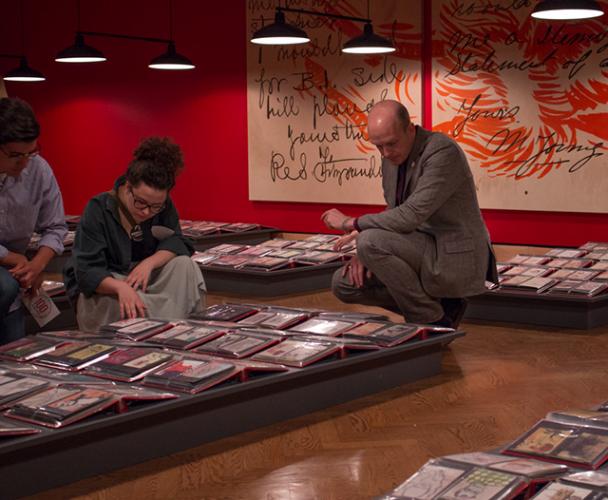 In Mothersbaugh’s postcards, thinking on paper lives on with a vengeance. It makes you wish Leonardo had used pen and ink, or at least a set of colored pencils.

He made the first Orchestrion while composing music for Wes Anderson’s film “Moonrise Kingdom.” Mothersbaugh has composed countless soundtracks for movies, TV shows and video games; his credits also include “Pee-wee’s Playhouse,” “Rugrats,” “The Royal Tenenbaums” and  “The Lego Movie.” This show doesn’t include his soundtracks, but it does include Devo ephemera.

Mothersbaugh stopped by Thursday’s preview to answer questions. He might be the most charming and engaging person on the planet, as well as one of the most creative. When asked, “What is it like for you to see your artwork in a museum?” he answered:

Honestly, it’s kind of one of the best things that ever happened in my life. There have been a few really good things. Playing on stage in a little club and seeing David Bowie sitting there was a good one. Getting married, then adopting a kid – my wife pushed me into it, then at the moment I saw the baby, all of a sudden this door opened in my brain and I realized I actually wanted to be a dad and I never knew it. … When I walked into the museum and saw the work, it felt really good.

We asked how it was to share a bill with Leonardo. He said:

If he challenged me to see who can do the best kind of beefy-naked-man, nude-guy drawing, he might win. But if I said OK, let’s see who can write any style of music, I could probably write a better piece of music than him. So it depends on who goes first in the challenge. I think I get to represent de-evolution in this match-up.

Introducing “Codex” and, by extension, “Myopia,” Bortolot said, “The goal is ultimately for all of us to recognize the creativity within ourselves.” The big, overstimulating and exhausting new exhibitions at MIA don’t just report on creativity or compile examples. They mean to seed it, inspire it and kick us in the pants. At the very least, we should all start writing down ideas and sketching in notebooks. 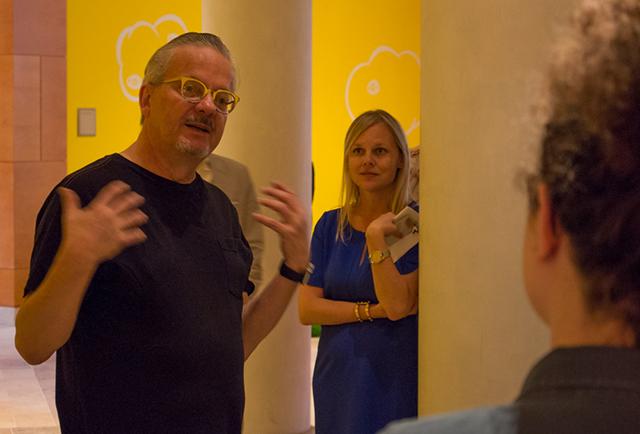 MinnPost photo by John Whiting
Mark Mothersbaugh: “When I walked into the museum and saw the work, it felt really good.”

Friday through Sunday at the Theater Garage: Gremlin Theatre presents “H2O.” Peter Christian Hansen and Ashley Rose Montondo star in Jane Martin’s play about self-destruction, notoriety, and the journey to salvation. Hansen is a wealthy Hollywood actor about to play Hamlet on Broadway; Montondo is the devout Christian cast as his Ophelia. We haven’t yet seen this but we hear it’s a terrific 90 minutes of theater. Ellen Fenster directs. 7:30 p.m. Friday and Saturday, 3 p.m. Sunday. FMI and tickets (Adults $25, seniors/Fringe button holders $22, under 30 pay half your age). Ends June 27. 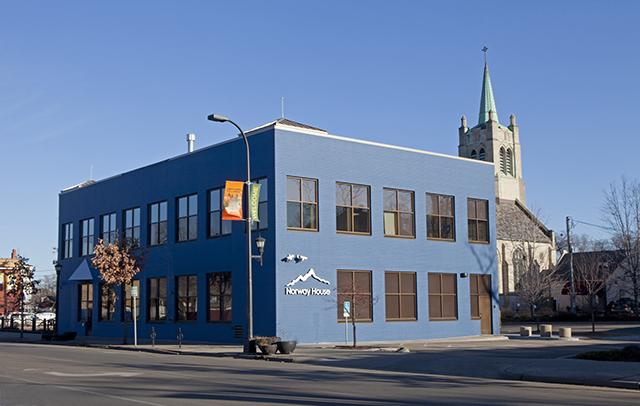 Courtesy of Norway House
There’s a new home for Norwegian culture and heritage in Minnesota.

Sunday at Highland Park Library: An evening with J.D. Salinger biographer Thomas Beller. Everyone is fascinated with Salinger’s years of silence. Beller finds those least interesting, focusing instead on the years when the author wrote all the books that made him famous. The New York Times describes Beller’s biography, “J.D. Salinger: The Escape Artist,” as “partly a look at Salinger’s early life and career, and partly a memoir about the New York that Beller grew up in and sees reflected in his subject’s work.” Registration is free, but you’ll be asked if you want to donate to the capital campaign for the Highland Park and Sun Ray libraries.

On sale at 10 a.m. today: Rodgers + Hammerstein’s “Cinderella.” It’s a story that never gets old, no matter how we feel about poor pretty girls being rescued by handsome princes. The Tony-winning Broadway musical is a contemporary take on the classic tale, with live music, transformations, and surprising new twists. Thursday, Sept. 8 through Sunday, Sept. 13 at the Orpheum. FMI and tickets ($39-$134). Buy at the State Theatre box office and avoid fees.