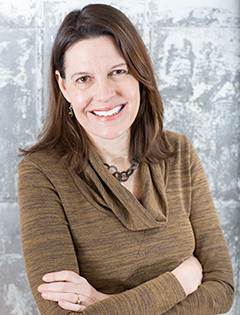 To Jocelyn Hale (she prefers Jocey), the number 13 means change, not bad luck. She spent 13 years writing a column for the Southwest Journal. And after 13 years with the Loft – five on the board, eight as executive director – she’s leaving, just as the nation’s largest literary center enters its fifth decade.

Hale’s time as the Loft’s e.d. began shortly before the economic downturn and ends soon after “40 for 40,” a 40-hour, 40-events Loft birthday bash that starts Friday. We spoke recently about the time in between and what lies ahead.

MinnPost: The Loft is nationally known and hugely influential. How can you leave?

Jocey Hale: [Laughs] My husband and father have asked me that because they know how much I love the Loft. I love the organization, I love the people I work with, I love the work we do.

But I have, like many of us, worked really hard these last 10 years in particular – raising my kids; my mother was dying; and I went to graduate school [at the Humphrey Institute, earning a master’s of public affairs degree].

I started at the Loft in 2007, and you know, you just get a little tired. The Loft is an all-encompassing job. I had promised myself that I would take a year off around the time my kids were in college. When I was 28, I took a year off and traveled in Central America, and it was one of the best years of my life.

I thought that would also be the right timing for a transition at the Loft. When I learned that AWP [the big national writers’ conference] would be in Minneapolis in 2015, I saw that as an opportunity for the Loft to interview the national pool of people who would be in town anyway.

And I thought – wouldn’t it be cool to have the transition happen on our 40th anniversary? It’s a chance to look back and forward, too. It was a kick to learn that the new executive director [Britt Udesen] is turning 40.

I could have stayed longer, but it made sense for the organization. So I will begin my personal gap year in September. I’m giving myself at least nine months. After that, I don’t have a clue. I’m young, I have a lot of energy, I will keep working, and it will be in the arts or public affairs.

MP: Are you already hearing from people about returning to work?

JH: Some people have talked to me, and I have been pretty firm about “please contact me for opportunities that start after April.”

MP: Would anything in particular tempt you?

JH: At this moment, I’m saying I don’t want to fundraise for another organization. The literary field keeps growing partly because the Loft has inspired all these centers around the country – GrubStreet in Boston, Lighthouse Writers in Denver, Hugo House in Seattle. We are all drawing money from the same small pool, and our money keeps going down. That’s not why I’m leaving, but I would like a break from fundraising.

MP: What are some of your plans for the coming year?

JH: The day after “40 for 40,” I’m jumping in the car with my husband and kids, and we’re driving across the country and camping in Yellowstone and other places. I’m spending the fall visiting with cousins. I want to ski the Loppet in January.

I will take time to write and read and exercise, and reflect. I’m handed so many amazing books and I often can’t finish them because I have to read the next one, and I want to read a little bit of all these wonderful writers I’m going to hear. So I am looking forward to finishing some books!

MP: When you run an organization like the Loft, do you end up putting your own writing aside?

JH: Oh, yeah. We have all these incredibly talented writers who work at the Loft. But when you work in an organization that supports a certain art form, and you love it so much, you throw yourself into making it possible for other people to do it.

I wrote a column for the Southwest Journal for many years. I’ve written for the Star Tribune and Minnesota Monthly. It just became hard. I’ve taken classes at the Loft in lots of other genres. I have a half-written novel, and I have seen enough other novels and writing to know it’s no masterpiece, but I want to finish it so I can say I wrote a novel. [Laughs.]

MP: You’ve taken classes at the Loft for years. What was the first?

JH: Even before I was on the board, I took a class on how to make it as a freelancer. That was probably in the late 1990s. I was doing a lot of magazine writing then.

MP: What made you want to do more with the Loft than take classes?

JH: Backing up, I’ve always been a voracious reader. I have pretty intense learning disabilities, so getting through school was a struggle. I’m dyslexic, and I didn’t read until about third grade.

Writing has always been a challenge for me. The physical act of writing was difficult, and my spelling is horrible. It is ironic that today I am running the Loft. It wasn’t until computers became part of my life, after college, when I realized – oh my gosh, maybe I could write!

My first job out of college was at the Playwrights Center. [At that time], the Loft was in our basement. I was too intimidated to even go down there, because I thought – oh, those writers! Then I worked at Brass Tacks Theater and Film in the Cities. I worked for Dan Buettner for about a decade. That led me to Best Buy, where I worked in their foundation as manager of Twin Cities giving.

When I was doing that job, I was also freelance writing and taking classes at the Loft. I joined the Loft’s board. Then the executive director’s job became available. I didn’t think I would apply because that job sounded too hard. Also, I was in line to be the board chair, and I was excited about that.

But enough people came to me and said, “You love the Loft so much, will you just apply?” So I did, and I got the job. And then, about two weeks after I took the job, the economy crashed.

MP: And funding dried up.

JH: We knew that foundation money would shrink going forward. Individual donors were freaking out. We had to lay off two people quite quickly. A year or two later, we had to do a major restructure and let go of five people who had been with the Loft a long time. It was very, very painful.

At the same time, technology was completely changing the way the world was relating to reading and writing. Blogs, ebooks, social media – everything.

MP: Didn’t the Loft once offer a class with iPod in the title?

JH: That was in 2006, when I was on the board. It was called “Reading and Writing in the Age of the iPod.” Isn’t that hilarious? When I started [as e.d.], the Loft was super, super behind in technology. We had employees who didn’t use office technology at all, and one employee barely used email. At the time, I and maybe one other person had the best technology skills of anybody on the staff. I now have the worst.

MP: And the Loft is on sound financial footing.

JH: Yes, and we always have been.

MP: What are you personally proud of from your time at the Loft?

JH: I’m very proud of the board. It’s a wonderful board to be on. We have artists on the board, and major philanthropists. Everyone is bound together by their love of our mission. It’s a racially diverse board.

I’m super proud of the staff, and being able to champion the staff. I’ve hired everybody on staff except for [spoken word artist] Bao Phi, but I have promoted Bao Phi several times. He is now the program director. Bao is a major national star. And he is so kind, so talented.

I am really proud that we have made it through all these years without a deficit. We always had the strategy of growing instead of retrenching. We would grow out of problems. Right in the midst of everything, we added online learning and redid the website.

And you know, there’s this old rap about the Loft not being very diverse or whatever, and that is so yesterday’s news. We take diversity and balance seriously at every level of the organization. We have it as a goal and an outcome in our strategic plan, that the constituents we serve match the demographic numbers of our state and, aspirationally, the country. You go to a lot of our readings and events, and it is the most racially diverse audience you’ll see anywhere in the Twin Cities.

I’m also proud because I’ve probably gone out in the community three or four nights a week the whole time I’ve been at the Loft. I’ve gone to Loft events, readings in bookstores, and other people’s events. That’s probably why I’m a little tired.

MP: What advice would give to your successor, Britt Udesen?

JH: To get out there, meet as many people as she can, get to as many events as she can, take a class, go to readings. Just start soaking it in. Listen and meet everybody. This is a very collaborative community. And trust the staff. The staff really, really know what they’re doing.

MP: She calls this her dream job.

JH: It was my dream job. There has not been one time in my life when I’ve told somebody what I do and they haven’t gone, “That is so cool!”

Jocey Hale and Britt Udesen together plan to attend as many “40 for 40” events as they possibly can. This is a fundraiser, and tickets are still available to most events, priced from $5 for a poetry celebration to $1,000 for an all-access Golden Ticket hosted by Hale. Udesen will take over as the Loft’s executive director in mid-September.

The Loft at 40: Jocelyn Hale looks forward to her own transition