Is it already August? Then it’s time for our annual trifecta of art fairs: Uptown, Powderhorn and Loring Park.

Unless you’ve just landed, you know the drill. Wear cool, comfortable clothes and shoes. Bring a water bottle. Take your time; you can run through one or all three, but why bother going to an art fair if you don’t talk with an artist or two or a dozen? If the only way you can get out for the day is with the triple-wide stroller and your pair of St. Bernards, that’s fine, but at least try to stay in your lane. And don’t walk around smoking a fat cigar. That’s not a rule, but it’s basic human decency. 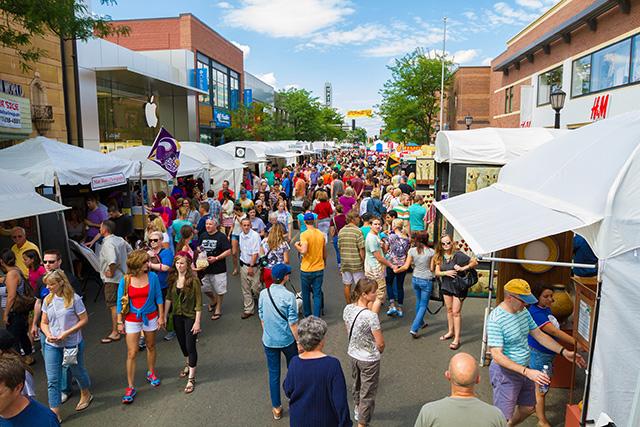 Courtesy of the Uptown Art Fair
Uptown: the big one, granddaddy of them all.

The lowdown on Uptown: The 52nd annual Uptown Art Fair, the big one, granddaddy of them all, starts Friday at noon and ends Sunday at 5 p.m. This year features more than 350 professional artists, a Youth Art Fair with 50 up-and-comers, three full days of live stage performances, a culinary arts competition (“Top Chef” with a twist, it pairs chefs with artists), a Family Imagination Station (create clay art with Northern Clay Center; you make it, they fire it), food, beer, and people-watching. Some 400,000 are expected to attend.

Brand-new for 2015: a Fish Smart Seafood Stakes, a 30-minute cook-off using sustainable seafood sponsored by the Fish Smart program at the Minnesota Zoo. A guess-the-weight-of-a-Subaru-filled-with-clay contest, where the winner gets a group event at Northern Clay Center, and Subaru will donate a day of clay art to the school of the winner’s choice.

The story on Loring: This is the 16th year for the compact, classy downtown festival near the Walker in one of the city’s oldest and loveliest parks. The Loring Park Art Festival, which opens Saturday at 10 a.m. and ends Sunday at 5 p.m., features a more manageable 140 artists, strolling musicians, live stage performances, and plenty of food. 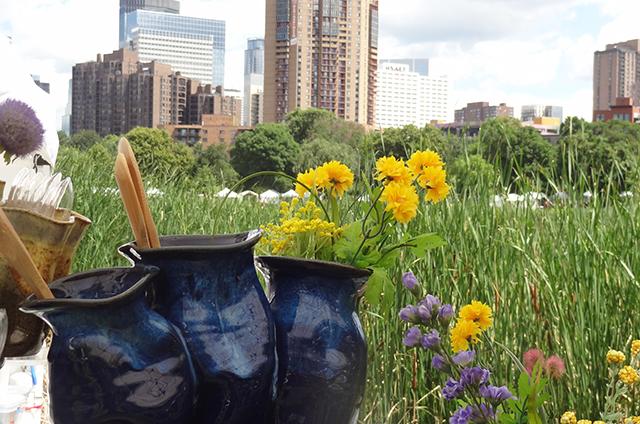 The skinny on Powderhorn: Now in its 24th year, this is the most laid-back and community-centric of the three. Set in a 66-acre park along a pathway circling one of our city lakes, the Powderhorn Art Fair is made for strolling. The 184 artists are more spread out, the music on the World Stage is multicultural (Sephardic Jewish, Arabic, Irish, Iranian and Kurdish), and the entertainment around the park includes art fair tours in Spanish, puppet shows from Open Eye Figure Theatre, hands-on art from Articulture and a Hosmer Library book walk. 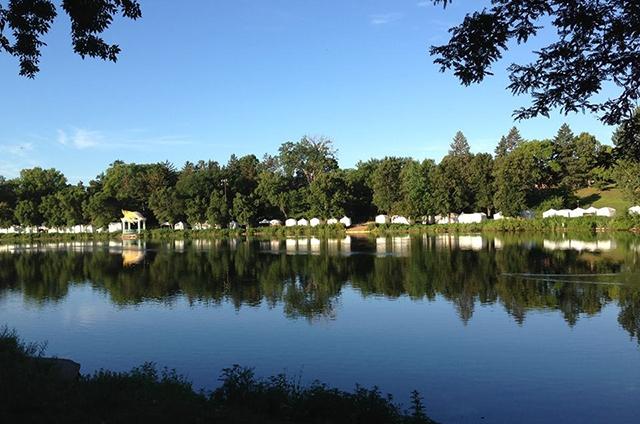 Powderhorn is the most laid-back and community-centric of the three art fairs.

Get a free Metro Transit Art Pass (download from any of the three festival websites) and ride to and among all three fairs. Uptown offers Nice Ride bike valet service; first-come, first-served. 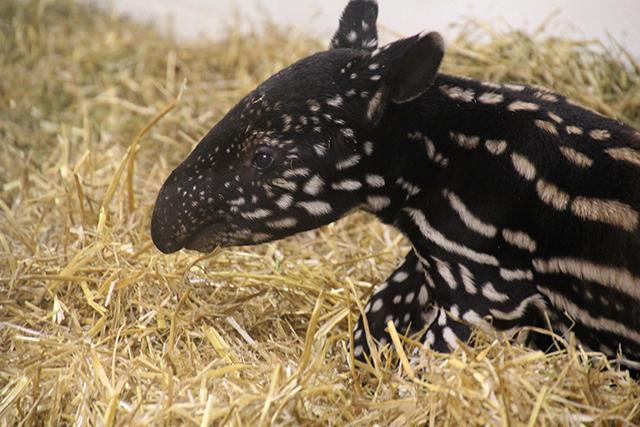 The Minnesota Zoo has a new baby tapir, and now everybody will want one. Born at 5 a.m. on July 30 after a 13+-month gestation period, the male calf weighed 19 pounds at birth and is already up to 25.

“For the first 6-8 months of their life,” the press release adorably said, “tapir calves resemble furry watermelons with legs.”

Malayan tapirs are an endangered species. The yet-unnamed baby brings the total known number in North America up to 37. According to Tom Ness, the Zoo’s Tropics Trail supervisor, fewer than 1,500 exist in the wild.

Our little one is not yet on public view – he’s bonding with his mother, Bertie, behind the scenes – but you can watch him on a webcam if you have Internet Explorer, which we don’t, darn it.

Tonight (Tuesday, Aug. 4) at the Trylon Microcinema: Ralph Bakshi’s “Wizards.” The Trylon is having a month-long Bakshi mini-festival, and if you’re at all interested in animation, you’ll want to see at least one of these films. Born in Palestine, raised in Brooklyn and Washington, D.C., Bakshi made animated films for adults, mixing live action and animation by the use of rotoscoping – hand-traced photographic images. So his films don’t look like anyone else’s. Here’s the whole line-up, with links to buying tickets ($8). All films screen at 7 and 9 p.m.

Tonight at the Black Dog: Dean Magraw and Davu Seru. A First Tuesdays gig at the Dog has been a more-or-less regular thing for these two fine musicians since 2011. Magraw is a guitarist who can play anything from Irish jigs to Jimi Hendrix and John Coltrane (he calls his approach to music “Heavy Meadow”), Seru is an avant drummer, so what they do mostly is improvise, and they’re very good at it. This is always a warm and intimate evening. No cover, but donations are welcome.

Wednesday at Interact: Welcome Home Event for Kevin Kling and Jeanne Calvit. Storyteller Kling and Interact’s founder and artistic director Calvit recently traveled to Thailand to perform at the grand opening of the Rajanagarindra Institute of Child Development. They met Her Royal Highness Princess Maha Chakri Sirindhorn of Thailand and civic leaders from throughout Asia, and they have stories to tell, songs to sing, and photos and artwork to share about this visit and others from the past five years. Doors at 6:30 p.m., program at 7. Free, but advance registration is required because of space limitations, and donations are accepted at the door. 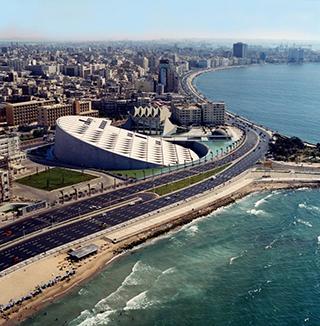 Friday at Atlas Grill: More than a Library: The Bibliotecha Alexandrina in Alexandria, Egypt. You’ve heard of the Library of Alexandria, founded by the successor of Alexander the Great in the Third Century BCE, destroyed in 400 CE and mourned ever since, an enduring symbol for the loss of cultural knowledge. (Many stories about ISIS mention it.) Built by the Egyptian government near the site of the ancient library, opened in 2002, the $200 million Bibliotecha Alexandrina includes nine academic centers, four museums, six specialized libraries, 1.5 million actual books, an immense digital book archive, and a computer that can access 45 databases in multiple languages. Dr. Ismael Serageldin, its director general, will be here to describe and talk about it in a program that also includes cocktails, dinner, live music and special guest H.E. Mohamed Tawfik, Egypt’s ambassador to the U.S. Several groups are sponsoring this event including the Minnesota Friends of the Bibliotecha Alexandrina, Books for Africa, the Friends of the St. Paul Public Libraries, and the Humphrey School. 6 – 9 p.m. Tickets here ($60).

Single tickets are available to all concerts in the Schubert Club International Artist Series. The big ones you might have been waiting for if you’re not a series subscriber: violinist Joshua Bell on Sunday, Nov. 1 and baritone Bryn Terfel on Wednesday, April 20, 2016. Here’s the whole line-up. Also on sale: Music in the Park and Accordo. We’re especially intrigued by quartet-lab, the string quartet that includes the SPCO’s new artistic partner Patricia Kopatchinskaya.