Minnesota is a great state and the Minneapolis Institute of Art is grand, but seriously, who wouldn’t leap at the chance to live in Florence and run the Uffizi Gallery? So we can’t blame Eike Schmidt for giving us the auf wiedersehn.

On Tuesday, Italy’s culture minister, Dario Franceschini, announced that Schmidt, currently Mia’s James Ford Bell Curator of Decorative Arts and Sculpture, has been appointed director of the Uffizi, one of the world’s oldest museums, whose treasures include Botticelli’s “Birth of Venus” and Leonardo’s “Adoration of the Magi.”

Schmidt, a German, is one of several non-Italians named to head major galleries in Italy in a recent shake-up of the nation’s museum system. Foreigners have also been named to run the Borghese Gallery in Rome, the Gallerie dell’Accademia in Venice, and four more prestigious Italian institutions.

Mia president Kaywin Feldman told the Associated Press, “We are very sorry to see Eike leave us, but delighted for him. The Uffizi is one of the world’s greatest museums and I am terribly proud to have a Mia curator assume the directorship there.”

Schmidt previously held positions at Sotheby’s in London, the Getty in Los Angeles and the National Gallery of Art in Washington, D.C. This won’t be his first job in Florence. From 1994-2001, he worked at the German-funded Art History Institute there. Two years ago, he curated an ivories exhibition at the Pitti Palace.

Schmidt is the third Mia curator to leave within the past nine months. Last November, Elizabeth Armstrong, contemporary art curator since 2008, departed for the Palm Springs Art Museum to be its new director. Earlier this month, Christopher Atkins, coordinator of Mia’s Minnesota Artists Exhibition Program (MAEP), crossed the river for a position as curator of exhibitions and public programs at the Minnesota Museum of American Art.

Mia had this to say about that: “We are actively conducting interviews for the Contemporary Art curator position and it’s going extremely well and we will have someone in place quite soon.”

Club Book has announced its fall season of free celebrity author events at community libraries around the metro area. It’s a good one. We’ll selfishly start with the one that made us go OMG: Sara Paretsky. Named a Grand Master by the Mystery Writers of America, Paretsky is the author of the best-selling V.I. Warshawski series of page-turners.

Here’s the whole impressive line-up: Sept. 17 at the Chanhassen Public Library: Meg Waite Clayton, whose five novels include “The Race for Paris,” just out, about female reporters in the closing days of World War II in Europe. Sept. 24 at the R.H. Stafford Library in Woodbury: journalist, historian and author Mitchell Zuckoff, whose latest, “13 Hours,” is considered the definitive account of what happened in Benghazi. Oct. 1 at the Galaxie Library in Apple Valley: Paretsky, presenting her newest tightly plotted Warshawski, “Brush Back.”

Oct. 6 at the Prior Lake Library: journalist Marja Mills, author of “The Mockingbird Next Door,” a new biography of Harper Lee. Mills traveled to Monroeville hoping to get an interview with Lee for the Chicago Tribune; instead, she struck up a close friendship with the famously reclusive author. Oct. 12 at the Stillwater Public Library: Emily St. John Mandel, whose dystopian novel “Station Eleven” won the Arthur C. Clarke Award and was shortlisted for the 2015 National Book Award. Oct. 20 at the Plymouth Library: historical and regional fiction writer Ron Rash, whose prize-winning novel “The Cove” was made into a movie starring Jennifer Lawrence and Bradley Cooper. His latest, “Above the Waterfall,” is a look at small-town life in contemporary Appalachia, where he grew up.

Oct. 27 at the Rum River Library in Anoka: Minnesota thriller novelist Chuck Logan, whose “Homefront” was adapted for the big screen in 2013, with Jason Statham starring. Logan’s new book, “Fallen Angel,” is about a wounded female Army pilot recently returned from Iraq. Nov. 2 at the Roseville Library: Minnesota authors Alexs Pate and Tish Jones in conversation about their writing and the African-American experience in Minnesota. Pate’s books include “Amistad,” a novelizaton of the screenplay for the Steven Spielberg film; Jones is a poet, activist, and executive director of TruArtSpeaks. Nov. 1 at Highland Park Community Center in St. Paul: Latino novelist and memoirist Brando Skyhorse, whose recent memoir, “Take This Man,” tells stories from a childhood during which his mother raised him to believe he was Native American.

Coordinated by Library Strategies, the nonprofit consulting group of the Friends of the St. Paul Public Library, Club Book is a program of the Metropolitan Library Service Agency (MELSA) and supported by legacy funds.

Friday through Sunday at the IFP Minnesota Center: Grand Opening. As the Northern Clay Center isn’t just for potters and Open Book isn’t just for book artists and writers, the Independent Film Project’s new home in St. Paul won’t be just for filmmakers. This weekend, we’re all invited to tour the 5,500-square-foot space in Vandalia Tower, an old mattress factory near the Green Line being renovated by First & First that will also house a brewery, coffee shops, artist studios, restaurants and two microcinemas. The IFP center includes a gallery/lobby named for artists Ann Marsden and Gerald “Gus Gustafson,” an outdoor courtyard, meeting and event spaces, and four classrooms. Here’s the schedule: Friday, 6-9 p.m.: Grand opening of the Marsden/Gustafson Gallery. Thom Barry has curated a show of photos by Marsden and Gustafson. A documentary on Ann Marsden will be shown; wine, beer and snacks will be served. Saturday, 6-10 p.m.: Grand Opening Gala. With special guests from Los Angeles’ Film Independent and IFP New York, a short program from IFP Minnesota and IFP National, and the announcement of the Minnesota Screenwriting Residency. This is a ticketed event ($100). Food, wine and cocktails will be served. Sunday, noon-4 p.m.: Open House. Free and open to the public, with food, drinks and entertainment. 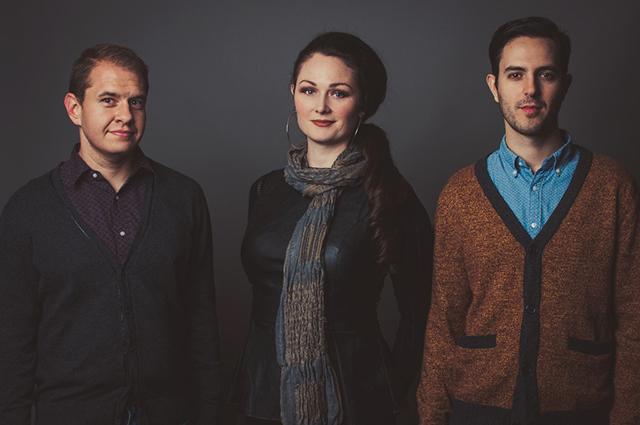 Saturday at Vieux Carré: Jeremy Siskind’s Housewarming. What’s especially exciting about this for us locals is the return of vocalist Nancy Harms, the former Clara City schoolteacher who left Minnesota for New York to pursue her passion for jazz singing. She’s been involved in a lot of projects since, including recordings and tours with pianist/composer Jeremy Siskind and reed player Lucas Pino. “Housewarming” is a collection of mostly original songs about home, and what it means to have a place where you belong. It’s a thoughtful, personal, often wistful album perfect for listening at home or, next best, in a small, intimate basement club in St. Paul over a glass of wine or a Sazerac. Nancy sounds better every time we hear her. 8:30 p.m. $12 cash at the door.

Sunday at Augsburg’s Hoversten Chapel: A Variety of Bach. As part of the Twin Cities Early Music Festival, which continues through Aug. 29, the Bach Society of Minnesota will play several selections by Bach and, by the way, preview its upcoming season. The music includes the choral motet “Jesu, meine Freude,” a solo aria from the Christmas Oratorio, the “rarely heard but hilarious” work “Quodlibet,” and a transcription of the second “Brandenburg” concerto. 8 p.m. Concert tickets here ($15). (A concert ticket may be used at any ticketed concert in the festival, except the closing opera.)