In Maria Schneider’s music, you hear wind on the prairies, and birdsong. You stand on a silo and look out at bean fields. You walk at night with a flashlight; “the moon on a leash,” in poet Ted Kooser’s words.

Born and raised in Windom in southwestern Minnesota, educated at the U and the Eastman School, Schneider is one of the top composers in jazz today, a three-time Grammy winner and leader of her own 18-piece, New York-based jazz orchestra for more than 25 years. Her latest album, “The Thompson Fields,” released in June on the fan-funded ArtistShare label, is named for a neighbor’s family farm in Windom.

Gorgeous, majestic, openly emotional, it embraces what she cherishes: nature, community, beauty for its own sake. It’s being called her best work yet, and if you’re at the Detroit Jazz Festival this weekend, a favorite of many Minnesota jazz lovers, you can hear much of it performed live on Saturday night.

We spoke by phone earlier this week. She was at home in New York, in the small Manhattan apartment where she has lived for 22 years.

MinnPost: You once said, “In first grade, I wanted to be an ornithologist, but then music took over.” Early this year, you told Downbeat magazine, “In my next life, I might be an ornithologist — if there are any birds left to enjoy.” Why birds?

Maria Schneider: They were my window to connecting to nature. The song, the beauty, the sheer variety, the evolution, the feathers, the flight, the migration. … You know when you look at the stars at night, or look at a planet through a telescope, the concepts are so huge. For me, birds are like that. They’re born and develop in a matter of a few weeks, then they’re off in the air, heading down to South America or somewhere else. It’s crazy. It’s unfathomable. It gives me the sense that there’s something bigger out there. It makes you feel insignificant, and then it makes you feel significant because you’re part of it, too.

MP: You’ve lived in New York for 30 years, yet much of your music is about your childhood home in Minnesota. Are you homesick?

MS: Not homesick, because I love it here, but I would say I’m nostalgic about home. They have a word in Brazil, “saudade,” that means a kind of longing. A sweet longing, not a miserable longing. People sign letters “saudade,” meaning “I miss you.” I have that feeling about home. The people from my hometown – they’re just such good stock.

[Windom] was a rich place to grow up. We had fabulous teachers and great families. We had a sense of community, the kind you don’t get quite as much in a big city. It’s like, “Oh, you’re Carl Schneider’s daughter. … Oh, yeah, you turn left at the Mattson house, or go out until you hit the Fuller farm and then turn right for a while.” That kind of referencing feels rooted, and when you grow up in a place like that, you don’t lose those roots.

MP: “The Thompson Fields” is full of references to your hometown – the prairies, milkweed, your neighbor’s farm, a tornado you watched with your mother. How did that album take shape?

MS: I’ve never set out to conceive an album. All of my albums are basically the music from [a period of my life]. If I feel like something’s starting to coalesce into an album – if I see that certain pieces could work together – maybe I’ll write one or two more to link everything up.

My first album [“Evanescence,” 1994] was very earnest. First albums are often powerful, because they’re the first creative expression people put out on the planet. After that, you become much more self-conscious. I struggled with psychological aspects when I did my second album [“Coming About,” 1996].

In the middle of writing my third album [“Allegresse,” 2000], I went to Brazil. I remember thinking the music on that album felt a little disjointed. What I didn’t realize until years later was that Brazil changed my music. It brought much more joy, unabashed joy and beauty into my music. 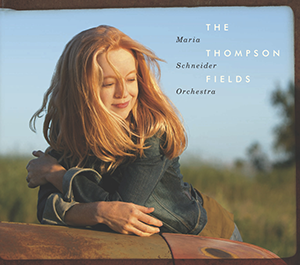 When I was a classical [music] student at the University of Minnesota, there was this idea that tonality was passé and beauty is insipid. And then in the jazz world, in the beginning I felt like my music needs to be earnest, it needs to be strong, it needs to have power and darkness.

When I went to Brazil, their music was so full of beauty and brightness. I decided I don’t need to feel ashamed of loving beauty and writing something beautiful. I grew up appreciating beauty, so that started to affect my later albums. “Concert in the Garden” [2004] had that. “Sky Blue” [2007] had that – not that they don’t have dark pieces, too.

I think what separates [“Thompson Fields”] is for the first time in literally decades, I started spending more time out in nature again, like I did a lot when I was younger. It brought in that natural element, and that nostalgia for where I come from, and for birds. Those things have been coming back into my music for a while.

[Note: Schneider and her partner, Mark Righter, a lawyer for New York University, have a house in the Catskills, where they spend many weekends. “When I play piano at the house,” she said, “many more birds come to my bird feeder, which I can see from the piano, and they definitely respond to the music.”]

MP: You have had women in your band, but at the present time, it’s all men. Traditionally, the leader of a jazz band or orchestra is a man. Has it ever been an issue for you, to be a woman leading a band of men?

MS: No, and the reason is I’m not seeing myself. I’m inside my head, doing it all, and I’ve never been self-conscious about that stuff. I trace this back to Windom.

After I made my first record, a journalist asked me, “What’s it like to be a female composer?” I said, “What’s it like to be a male journalist?” I don’t think about it. … I will acknowledge that when I see video of me with the band, it always takes me aback. I don’t like looking at myself conducting, and the image of a female in front of the band always strikes me as a little odd. I always look a little thinner, lighter, wispier than I think I should. It’s like you expect more stature there or something.

Inside my head, I’m so into everything else I’m worrying about that I don’t even give that space. I’m worried about [things like] the trombone is too loud here, it’s not balanced, I have to get his attention so he knows. Or the tempo is too fast, is there a way I can slow it down without being obvious? Or the trumpets need to come out here, I need to let them know. Or how long do I let this solo section go? How do I bring in the band? Or, oh my God, they just went to another key! Those kinds of questions are much more daunting.

In Windom, my sister Kate was a painter. Her mentor was a woman. Our theater director in school was a woman. My piano teacher was a fabulous stride jazz pianist and classical pianist; she was a woman. On top of that, I used to duck hunt with my dad, and I hung out a lot with my dad’s friends, and they were great men with a great sense of camaraderie – classy people and nice men who didn’t treat me like a weak little girl. We’d go out duck hunting together and we’d clean the ducks together, and so I’m comfortable in my own skin in terms of gender and being around men.

It’s just never been an issue for me, and I’m thankful for whatever experience didn’t put the fear of it in my head, because I think a lot of the problems for women start when they have fear. That makes them not quite behave in the natural way they would, or communicate in their own natural way, and they either compensate or hold back, and that’s never good. So I know there’s true discrimination out there in many fields, but I’ve never felt it, I have to tell you. …

I remember seeing Toshiko Akiyoshi perform in Minneapolis at Orchestra Hall [in the early 1980s] and thinking – I’d love to do that. And it wasn’t because she was a woman, except subliminally. It was because her music was orchestral and it was jazz and it was performed in Orchestra Hall. I was like – wow. It made me see myself as being able to do something like that. Hopefully, I can do that for some young girl who might not otherwise see that potential in herself.

MP: You recently worked with David Bowie. How did that happen, and what was it like?

MS: He contacted me about a song he had started. He had another one, too, but I didn’t have time for two. I was getting ready to record my new album, and I wasn’t even sure I had time for one, but he brought it over and we sat and listened to it to see if we could do something with it together and have me arrange it for my band.

[Note: The song became “Sue (or In a Season of Crime),” the first track and only new song on Bowie’s career-spanning, three-CD collection “Nothing Has Changed,” released Nov. 17. Bowie posted the song on YouTube.]

I sat at the piano and played around with harmony a bit and said, “Maybe I can imagine doing something with this.” We got together several times and fooled around with ideas. I would work on some things, and he would, and then we’d share them, and he would say “I love that” or “No, I don’t like that” … [And eventually] we went into the studio and recorded.

He changed all the lyrics at the end. I never really knew what the lyrics were. I kind of knew the direction the song was taking, but then that changed, and it became about Sue getting murdered for cheating. He wanted it to be really dark.

I thought – oh my gosh, am I going to get a lot of flack for contributing to a song about a man murdering a woman? But I didn’t write the lyrics. And it does sound rather good.

MP: Do you think that was a one-off?

MS: He has talked about doing something together again, so maybe we will do more. I would enjoy it. I think we collaborated really well, and he loved working with the band. He’s a great fan of music – many kinds of music. He’s so brilliant it’s scary. He knows so much music and so many things – art and books and just everything, and he loves jazz.

He really likes my dark music. I was talking earlier about my music going to this bright place after Brazil. Who knows? He might have brought my dark side out. That’s one of the last things I wrote before I started working on the new record. Maybe my music will get incredibly dark now, because it was sort of fun.

Maria Schneider returns to Minnesota two or three times a year. On Friday, Oct. 23, she’ll be in Edina at a benefit for Erik’s Retreat, a living, working and social environment for young adults with autism. She’ll speak about her music career and her creative process. FMI and tickets ($90/$100).

This interview has been edited for clarity and length.