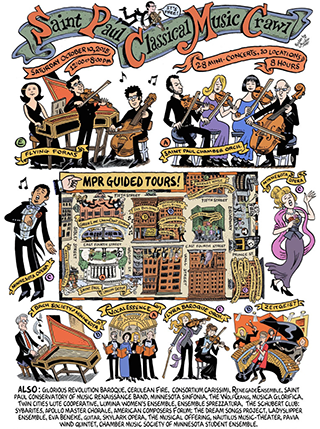 As if the Saint Paul Art Crawl weren’t fabulous enough, a whole new layer of sparkly wonderfulness has been added to this year’s event, thanks to the Baroque Room and the Knight Foundation.

Backing up a bit: In January 2014, the Knight Foundation announced something called the Knight Arts Challenge St. Paul: $4.5 million in grant money, spread out over three years, for arts projects happening in or benefiting St. Paul. Among the 42 winners of round one was the Baroque Room, which proposed a wildly ambitious idea: to showcase the St. Paul classical music scene during Art Crawl.

For eight hours on Saturday, Oct. 10 – starting at noon, ending at 8 p.m. – more than 110 free classical mini-concerts will take place in 10 locations around Lowertown. (Breaking it down, 28 groups or soloists will each perform four 15-minute sets of music on the hour and half-hour for two hours.)

The venues are Union Depot, the Show Art Gallery, the Baroque Room, Studio Z, Golden’s, the Black Dog, AZ Gallery, Nautilus Music-Theater, Sweet 317, and Heartland, which will host a final set and gathering, with assorted participants from the day, from 8 – 9:30 p.m. (This should be fun. A classical jam?)

In one day, you can hear virtually the entire St. Paul classical music scene and then some. Plan your own route or take a guided tour or two with Classical MPR hosts Tesfa Wondemagegnehu, Steve Staruch, Julie Amacher, Andrea Blain or Michael Barone.

Learn more at the project website. View the complete schedule here. To sign up for a guided tour, check the schedule and send an email to info@thebaroqueroom.com. Group limit is ten people per tour.

P.S. On Tuesday, Knight Foundation will tell us the winners of Knight Arts Challenge St. Paul round two. On Wednesday, we’ll tell you.

The Awesome Foundation works on a far smaller scale than Knight, but it’s giving money away, too, in the form of $1,000, no-strings grants for projects that will contribute to “community, culture and joy.”

Begun in Boston in 2009, Awesome has 82 chapters in 18 countries. To date, it has handed out $1,712,000 for 1,712 projects. (For the past few days, we’ve watched that number change daily on the website.) Grants are awarded by locally based “trustees” who contribute $100 each month. A just-opened Twin Cities chapter plans to distribute $1,000 grants at least six times a year, with the first to be awarded in November.

Go here to learn about funded projects, here for the online application. Select “Twin Cities, MN” as the chapter to apply to.

Tonight at SooVAC: Opening for “Markers of Time: Prints by Marilyn A. Owens.” Owens’ etching “Coverlet” is from a series she calls “From a Churchyard.” In Brevik, Norway, she came across a gravestone engraved only with a child’s Christian name. By placing a fur coverlet on the ground before it, isolating it (the actual gravestone is surrounded by other markers) and putting a high horizon line in the distance, she creates a sense of loss and comfort. This quiet print makes us want to see more of her work. 6-9 p.m. Through Oct. 24. SooVAC is part of tonight’s Minneapolis Gallery Crawl, so you can stop in there and lots of other places as well. 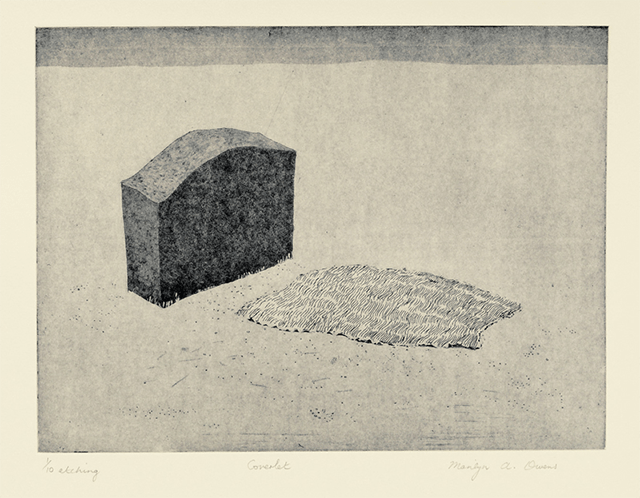 Opens Friday at the Guthrie: “The Events.” In 2011, a Norwegian right-wing extremist killed 77 people and injured hundreds in a bombing in Oslo and a shooting rampage on Utoya Island, a summer camp for politically active teenagers. Presented by Actors Touring Company, David Greig’s play uses two actors – Lesley Hart as Claire, a liberal, friendly vicar and choir leader, and Clifford Samuel as the Boy – to explore faith, politics, violence, community, healing, compassion and understanding in the wake of unthinkable violence. Each performance features original music sung by a different local choir. Audience members approach this play with understandable wariness and leave greatly moved. On the McGuire proscenium stage. Strong language and mature themes; 90 min. with no intermission. FMI and tickets ($22-$64). Ends Nov. 1.

Friday at Park Square Theatre: “Murder for Two.” Kylie Schultz of Theoroi, a young professionals group sponsored by the Schubert Club (and now in its fifth year), wrote this preview for MinnPost: “Following the wild success and popularity of their Sherlock Holmes adaptations, Park Square Theater’s new musical, ‘Murder for Two,’ will tickle every lover of the classic murder mystery. In the vein of Agatha Christie, Rex Stout and Raymond Chandler, this hilarious whodunit will leave you breathless between laughing and shocked gasps. Officer Marcus Moscowicz is a small-town policeman with dreams of making it to detective. When a novelist is killed at a birthday party, and the nearest detective is an hour away, Marcus jumps at the chance to prove his sleuthing skills. Everyone is a suspect in this whodunit full of musical patter and Holmesian twists. With one piano and thirteen roles played by two actors (Nic Delcambre as Moscowicz, Andrea Wollenberg as everyone else), ‘Murder for Two’ sounds like a perfect mix of musical wit, murderous talent and classic storytelling – a show to die for. Book and lyrics by Kellen Blair, book and music by Joe Kinosian. Directed by Randy Reyes.” FMI and tickets ($40/$60, discounts for 62 and up, 30 and under). Ends Nov. 1. Here’s a video trailer.

Friday through Sunday in Harris, MN: Robert Briscoe’s Annual Fall Studio Sale. Functional potter and McKnight artist fellow Briscoe has held a fall sale at his Harris home and studio for 27 years. This will be the last one he hosts there before turning the place over to Matthew Krousey, a young Minnesota potter who will also be showing his pots and hanging out, along with Jo Severson and Jason Trebs. Four fine potters, close friends, with a shared sense of aesthetics and excellence, in a beautiful setting with a campfire, great food, locally made craft beers and home brews. And plates, bowls, vases and mugs. Friday 12 noon-7 p.m., Saturday and Sunday 10-5. Wish Bob happy birthday while you’re there. FMI, directions and printable map.

Saturday at Northrop: Ballet West. The Salt Lake City-based dance company leapt to fame in the reality TV series “Breaking Pointe,” which ran on the CW network for two seasons (2012-13). On Saturday, Ballet West makes its Northrop debut and launches the 2015-16 Northrop dance season with Jerome Robbins’ “Fancy Free,” set to music by Leonard Bernstein, and George Balanchine’s “Who Cares,” danced to a medley of George Gershwin hits including “I’ve Got Rhythm,” “Embraceable You” and “Rhapsody in Blue.” Bonus: The music is performed by a live orchestra, which seldom happens these days in ballet. 8 p.m. FMI and tickets ($39-$64). Tonight (Thursday, Oct. 1), you can watch selected episodes of “Breaking Pointe” for free at Northrop’s Best Buy Theater. FMI. Come early on Saturday for a free performance preview, also in the Best Buy Theater.