Roger Guenveur Smith’s powerful one-man show “Rodney King,” which opened Thursday at Penumbra, is poetry and dance and jazz improvisation. It’s history and tragedy and blows to the head.

It’s a look back at someone many of us probably don’t think about much if at all, except when a white police officer fatally shoots or chokes an unarmed black man and is not charged with a crime, or is acquitted. Then we wonder if this will be another “Rodney King moment” that tips over into riots and looting.

Most of us remember something King said that has entered our cultural vocabulary: “Can we all get along?” Or we misremember it as “Can’t we all just get along?”

Smith, an Obie winner who has previously crafted solo performances about Huey P. Newton and Frederick Douglass, was in Los Angeles in 1992 during the so-called Rodney King riots, which left 53 dead, thousands injured and more than $1 billion in property damage.

When King drowned in his own backyard swimming pool in June 2012, Smith was deeply affected.

His unsparing and tender monologue, delivered with hip-hop beats and movement including slow-mo sequences that read like dreams, is a tribute, a portrait and a eulogy. Richly researched, it’s laced with an abundance of obscure facts that humanize a man who is often reduced to a sound bite or an image of a battered face.

Who knew, for example, that King had met Reginald Denny, the white truck driver who was famously beaten during the riots? That King drove to see the riots wearing a “red, green and gold tam with dreadlocks attached” — a Bob Marley wig? (“Incognegro,” Smith says.) That his friends and family called him Glen? That the steel plate behind his right eye kept it from falling backward into his head? That he loved to fish and surf?

Smith doesn’t actually portray King, except briefly, but rather narrates his life, portraying specific events including, horrifically, King’s brutal beating by several Los Angeles police officers. He often addresses King directly, as if checking in with him and confirming details. He doesn’t tell you he’s going to do that, so you have to figure it out, but it’s not hard, and once you’re into it, fascinating to watch a performance that includes so many people and stories.

For 70 minutes or so, Smith is alone on stage, simply dressed and barefoot, with no props but a corded microphone and his own saliva. You can’t look away. Sometimes you have to lean in and listen; he’s not a loud talker, he can be a fast talker, and he shifts between voices and speech patterns. If your cellphone burbles, he will improvise a small, biting phrase just for you.

Like William Mastrosimone’s “Extremities,” a 1982 play about sexual violence recently presented (indelibly) by Dark & Stormy Productions, Smith’s “Rodney King,” a show about events that happened more than 20 years ago, is a lot more timely than it should be. That it launches Penumbra’s 2015-16 season, themed “Revolution Love,” is a sign that the theater (which Smith dubbed “Bellamy Inc.” in brief comments following his performance) will not go easy on us this year.

A post-play discussion on Thursday, Oct 8 will ask the audience to consider, “Have we made progress in the last 20 years? Is it possible to restore trust when police harm community members or vice versa? How do we work together to heal our communities?” In other words, can we all get along? 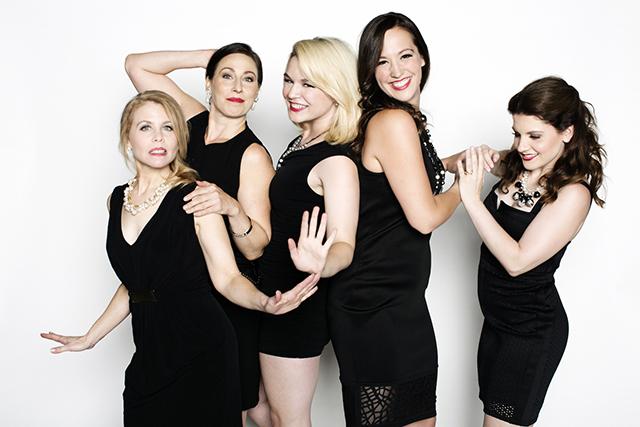 Photo by Eliesa Johnson
“The Realish Housewives of Edina: A Parody” premieres here, then tours to San Diego, Des Moines and Hartford, swapping out references to current events and hometown headlines along the way.

Tonight at the New Century Theatre: “The Realish Housewives of Edina: A Parody.” Do we really need a play about a faux reality show? Aren’t real reality shows bad enough? Oh, stop whining; this is simply a fun night at the theater. The parody was written by Kate James and Tim Sniffen, both veterans of Chicago’s Second City (so why isn’t there a “Real Housewives of Chicago?”), who gave the ladies reality-show-appropriate names like Brooke, Desiree and Ravonka (snort!). Anna Hickey, Quinn Shadko, Karissa Lade, Katherine Kupiecki and Kim Kivens (“Doyle and Debbie”) star; Chicago-based Matt Miller directs. Everything else about this production (the cast, set, costumes, music and lighting) is local. The show premieres here, then tours to San Diego, Des Moines and Hartford, swapping out references to current events and hometown headlines along the way. 7:30 p.m. FMI and tickets ($25-$34.50). Ends Nov. 15. P.S. Monday night (Oct. 5) is pay-what-you-can.

Saturday at a movie house near you: The Metropolitan Opera: “Il Trovatore,” broadcast live in HD. The Met’s production of Verdi’s tragic opera continues through Feb. 13, but this will be Russian baritone Dmitri Hvorostovsky’s final performance as Count di Luna before he returns to London for treatment for a brain tumor. Following last week’s opener, Anthony Tommasini wrote for the Times, “It’s impossible to imagine a singer giving more than Mr. Hvorostovsky did on this night.” He was showered with roses at the curtain call. Anna Netrebko is Leonora, Yonghoon Lee is Manrico, Dolora Zajick is Azucena. Marco Amiliato conducts Sir David McVicar’s Goya-inspired production. 11:55 a.m. FMI and theater finder (click “Find Cinema”). Near Minneapolis, you can see it at the Showplace Icon at West End, the Brooklyn Center 20, the Rosedale 14, the Southdale 16 and others.

Sunday at the Dakota: Afro-Cuban All Stars. Many of us got our first taste of real Cuban music with Ry Cooder’s “Buena Vista Social Club.” Released in 1997, the Grammy-winning album featured many of the musicians from the Afro-Cuban All Stars, led by Juan de Marcos. (Their own first album, “A toda Cuba le Gusta,” came out the same year.) Some of the band’s beloved elder statesmen (Ruben Gozales, Ibrahim Ferrer) have passed, and de Marcos has kept things current by adding younger musicians. But it’s still the same hip-swaying sound: Cuban son, rumba, bolero and cancion, with roots in 1950s Havana. 7 p.m. FMI and tickets ($50).

Monday at Macalester: Sherman Alexie and Bob Hershon poetry reading. A self-described Spokane/Coeur d’Alene Indian” (he has called “Native American” a “guilty white liberal term”), Alexie holds the rare distinction of having written one of America’s most frequently banned and challenged books, “The Absolutely True Diary of a Part-Time Indian,” for which he also won the National Book Award. Hershon published Alexie’s first book of poetry, launching his career as a poet and writer. So this will be an evening of poems by longtime friends. In the Alexander G. Hill Ballroom at Kagin Commons, 1600 Grand Ave., St. Paul. 7 p.m. Free.