On Sunday, Nov. 1, the St. Paul Chamber Orchestra will perform the first in a series of four concerts in a brand-new venue for the SPCO and the Twin Cities: the performance hall in the St. Paul Academy’s Huss Center for the Performing Arts.

Part of a $20 million project that also includes a multipurpose room, lobby, study areas and a high-bay scene shop with Paul Bunyan-sized doors, the 650-seat hall (which is also the theater for the school’s drama program) is the latest Twin Cities performing arts space designed by Tim Carl of HGA Architects.

Carl’s footprint on our local arts and culture scene is immense. To date, his projects here include the $88.2-million Northrop redo, the $44-million Ordway Concert Hall, the $33.8-million Janet Wallace Fine Arts Center (including the Mairs Concert Hall) at Macalester College, the $20.5-million expansion of Macalester’s studio arts building, and the $20 million Nelson Cultural Center addition to the American Swedish Institute.

Even in the Twin Cities, where Carl has done most of his work, people generally aren’t aware of his impact because the spaces he designs aren’t about him. While the Weisman Art Museum screams “Frank Gehry” (not that there’s anything wrong with that; WAM is one of our great treasures), Carl’s buildings barely whisper “Tim Carl.” Yet, according to SPCO president Bruce Coppock, “Tim’s rooms don’t feel like other rooms I’ve been in. They feel distinctive.”

If you’ve been in the new Northrop, gazed at the Ordway Concert Hall’s undulating ceiling, entered the Mairs and its warm, woody embrace, or had a cardamom bun at Fika at the Swedish Institute, you have a sense of that feeling. These are all wonderful spaces, beautiful and welcoming, somehow both intimate and grand, that balance the past with the present while respecting context and community. When a new space joins an older existing space (the Nelson Center with the Turnblad Mansion, the Ordway Concert Hall with the Music Theater, the Huss with the SPA’s Upper School), they meet in harmony, with no sudden, jarring moves.

An Indiana native and Notre Dame graduate in architecture, Carl joined HGA in 1998 and was put to work on projects for General Mills. Seventeen years and numerous awards later, he was named CEO this February of a firm that now has 700 employees and offices in Rochester, Milwaukee, Sacramento, San Francisco, San Jose, Los Angeles and Washington, D.C.

When Carl was first asked to be CEO, he said no. He agreed to take the job if he could also keep practicing as an architect. He likes to draw.

MinnPost spoke with Carl last week at HGA’s bright, airy offices in the Ford Center, kitty-corner from Target Field. The conversation covered a lot of ground, so this is the first of two parts. The second runs tomorrow. 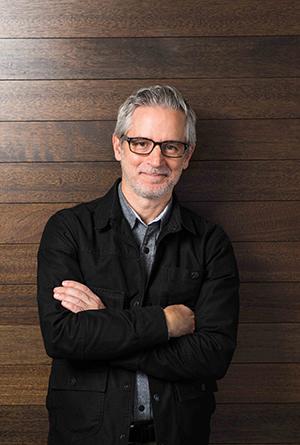 MinnPost: How did you end up specializing in performing arts centers?

Tim Carl: This sounds disingenuously modest, but I’ve been super lucky. I came into HGA in our corporate group and worked on all the General Mills projects. Dan Avchen, our CEO at the time, tapped me for a small arts project. He convinced Gary Reetz, the head of our cultural practice, to let me work on the addition to St. Ben’s arts center. Then they asked me to do a little artists’ live/work building in Maryland. I was still in the corporate group. I was just helping.

The next big thing was Northrop. Gary – who has been an incredible mentor – tapped me to work on that, and it was a big reach. I remember saying, “I can’t interview for this because I’ve never done anything like this.” He said, “Just trust me. We’ve got a lot of people here who know how to do this type of project.”

Northrop was talking with firms all over the world. We were competing with a Canadian firm and some of the best performing arts firms in the country. So we were super lucky to win that. We worked really hard to win it.

[Northrop] stopped and started, and it was over a long period of time. So we did the American Swedish Institute [Nelson Center] in there. We were lucky to get to work on that. We beat some really good firms in town.

MP: And then came the Ordway.

I wasn’t involved [at first]. We [HGA] were consulting with the Arts Partners about converting the Music Theater stage into something that would work better. All the Partners were successful, and they were all fighting for time on that stage. We were looking at how you could convert it from opera to Broadway to SPCO faster and also have it be acoustically better for orchestra.

We were working with a theater consultant in New York, and they came up with several ideas, and they were so expensive, and [the Partners] were pissed. They had spent fees for ideas that didn’t work.

Kevin Smith was head of the opera at that time, and he said to the Partners, “What about converting the McKnight Theater into a concert hall? Is that a crazy idea?” They came back to us and said, “We’re really unhappy, but we’re going to give you one more chance. Is it possible to fit a concert hall on the site of the McKnight, and can it be big enough to work acoustically, and can you do it in a way that doesn’t ruin the beauty of what [original Ordway architect] Ben Thompson created?” 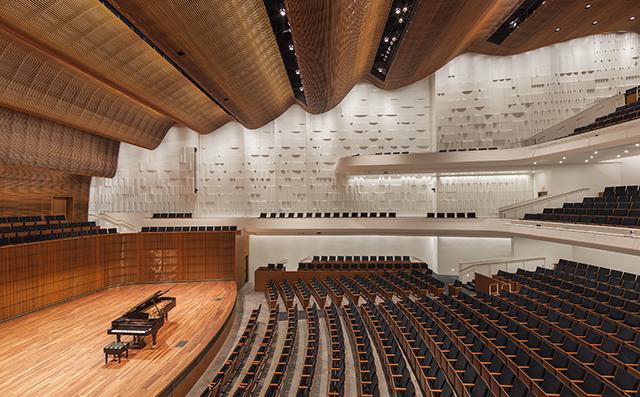 Photo by Paul Crosby
Inside the Ordway: the new Concert Hall.

So Dan Avchen tapped me to work on it. I had, like, two weeks to do a sketch of what it might look like, and it was a lot of pressure. I talked to a bunch of people, but I really thought the only way to add onto it was to not put something completely different on that corner. That would intersect with the beautiful glass façade in a way that would cut it off.

So I did a sketch that took the façade and continued it to the corner. We went to a meeting that was do or die. If they liked it, we’d keep going, and if they didn’t … They liked it.

MP: The ceiling is amazing. How did you come up with that?

TC: To be honest, my process is really collaborative. I love it when I come up with an idea, but when someone else comes up with a better idea, we go with that.

Early in the process, I was working with another designer, Andrew Dull. He and I were sketching different ideas in preparation for a meeting with the Arts Partners. There were many different versions of what that hall could look like – all of them contemporary, but some more conservative and others more out there.

MP: Do you consider the Concert Hall “out there”?

TC: Yes. Andrew had done one drawing where there was this wavy thing in the ceiling, and the Arts Partners were like, “That’s kind of cool. You should develop that.” So we did.

My process is to make sketches, and then a younger architect takes them and develops them in the computer or in a physical model. Often, they come up with something completely different, and we go back and forth. The process is very much driven by hand-drawing. I really like it when young architects hand-draw as well.

MP: Was there ever a time when you thought the ceiling might not work?

TC: No, but it was very complex. If [HGA was] a practice that was about making sure we did just the right thing that we could easily detail, and it would be easily constructed and there was no risk, we wouldn’t have done that ceiling.

There are 14 miles of dowels, and they can’t be spaced equally, because the sound will move through it in a weird way. The dowels are all in panels – big, heavy panels, 15 feet by 8 feet, that had to be lifted in with a crane-like element. My biggest fear was we’d get the panels up and you’d be able to see the inconsistency.

We did three mock-ups. It was a very scientific process of making sure we had the right design, the right details.

MP: There’s a similar perfection in the Janet Wallace Center, where you also used a lot of wood.

TC: I had a great team on that project, too. I had two young designers working with me, one tackling the lobby and one the concert hall. The designer working on the concert hall is a drummer, and the music program at Macalester has an African drumming history. So he did some research, and the pattern of the slats is based abstractly on the rhythms in African drumbeats. 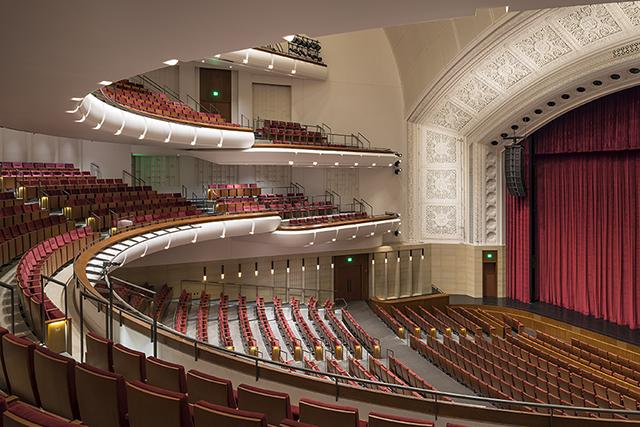 Photo by Morgan Sheff
“[Northrop] stopped and started, and it was over a long period of time.”

MP: The panels in the atrium at Northrop use symbols from choreography.

MP: What about the panels in the walls of the Ordway Concert Hall? Do their patterns allude to anything, or are they purely acoustic?

TC: That was really fun. We were trying to make the Concert Hall more contemporary, but have some aspects that resonated with the more Beaux Arts decorative quality of the Music Theater space. So I had the idea of using fluting, like on a column, but over-scaled and creating a texture. And then we brought that to the acoustician, Paul Scarborough.

There are probably seven different panel designs, and they’re put together in different ways, so it’s very irregular, and it’s more dense in some areas. As it goes up, it gets much less dense. So it’s extremely technically driven, but it’s also aesthetic.

What’s amazing about Paul Scarborough is how collaborative he is. You can’t do anything that would sacrifice acoustics. There’s no bartering about, “This looks more beautiful, so could the acoustics be a little worse?” You can’t do that. There are a lot of famous halls in this country where the architect said, “No, we’re going to do this instead,” or the contractor did something different and the acoustics suffered.

If you have to sacrifice something, it’s going to be on the aesthetics. So getting something that’s really beautiful and acoustically excellent is such a great, exciting thing to do, and [Scarborough] was fantastic. He would never go, “No, here’s the formula, and here’s what we’re going to do.”

MP: Everyone seems happy with how the Concert Hall sounds.

TC: At the very first rehearsal, there were just a few violinists onstage, just testing, and they started to hit it really hard because that’s what they had to do in the Music Theater space. And they were like, oh.

I’m told – I don’t have an ear – that you can hear so many notes you couldn’t hear before.

Tim Carl: His architectural footprint is immense, and just got bigger