Has an audience anywhere ever laughed during a live performance of Beethoven’s violin concerto? It happened Friday morning at the Ordway Concert Hall, when Moldavan violinist and SPCO artistic partner Patricia Kopatchinskaja led the orchestra in her own idiosyncratic, deeply researched take on it. You had to laugh – from the sheer joy and surprise of hearing the music, seeing the expressions on the faces of the musicians, observing the playful exchanges between Kopatchinskaja and the timpani, the cellos, and violinist Ruggero Allifranchini.

The more we hear Kopatchinskaja play, the clearer it becomes that for her at least, no piece of music on the planet is written in stone. And even Beethoven can be brand new.

The Beethoven came after the intermission, which was preceded by the world premiere performance of Michael Hersch’s Concerto for Violin and Chamber Ensemble, commissioned by and for the SPCO and Kopatchinskaja. The violinist, who worked with the SPCO’s artistic vision committee to plan the program, slipped Hersch’s piece in between the concert opener, Haydn’s Symphony No. 49, “La Passione,” and the Beethoven. If you wanted to hear the Haydn and the Beethoven, there was no escaping it.

She introduced the Hersch with a few words from the stage, wearing a red-streaked white gown that pooled around her bare feet. “This music could be traumatic for you, and maybe for us,” she said. “Classical music is like a big cruise ship, with everyone sitting in back looking backward, at the past. No one is sitting in front looking forward. … I ask you to listen [to this music]. You might hate it, but I am sure you will never forget it.”

Led by Tito Muñoz, an experienced conductor of Hersch’s challenging music, Hersch’s piece began with blasts from the horns and screams from the violins. A work born from grief – Hersch wrote it in response to the death of a friend – it wasn’t easy listening. Parts were loud and dissonant, and some passages were physically painful to hear. It was hard to tell where one movement ended and the next began, and the names of the movements – “Ferociously,” “Quarter note = 50,” “Still,” “Quarter note = ca. 44” – were not especially helpful. It lasted more than half an hour, which to some people probably seemed like forever. Our best advice for times like these, BTW: Don’t think. Just hear.

Are these complaints or criticisms? They are not.  Hersch is one of the most important composers working today. We should be hearing his music performed live – whether we like it or don’t, whether we leave the concert hall humming tunes from it or not (we won’t). Thanks to Kopatchinskaja and the SPCO, more than 3,000 people heard Hersch’s latest work live this weekend in St. Paul.

It would have been more than 4,000 – all four concerts were sold out – but an arm injury forced Kopatchinskaja to withdraw from the final performance on Saturday night. The elastic SPCO, which just last week replaced an ailing Martin Fröst with Alexander Fiterstein for two concerts here and an Asian tour, made some last-minute changes, swapping out the Hersch for a Mozart and Beethoven’s Symphony No. 7 for the violin concerto. The show went on, and in the words of one Facebook commenter, “We started out disappointed but ended up in awe!”

Kopatchinskaja returns to the SPCO in April with quartet-lab, a string quartet, and in June for the season finale. She also performs with quartet-lab in April at the Saint Anthony Park United Church of Christ as part of the Schubert Club’s Music in the Park series. Getting tickets now is a smart thing to do.

Has a sitting lieutenant governor ever appeared live on an improv comedy show? We can’t think of one, and The Theater of Public Policy is pretty sure this has never happened before, but on Monday, Nov. 16, Minnesota’s own Lt. Gov. Tina Smith will take the hot seat at the Bryant Lake Bowl Theater.

T2P2 co-founder and show host Tane Danger will interview Smith on a wide range of political and policy topics (and maybe ask about her plans for 2018, who knows), after which the comedy troupe will improvise on what was discussed. Then the audience can ask questions of Smith, and the troupe will return for one more round of comedy on the fly. (It’s a four-part thing, and none of the parts goes on too long.)

The goals of T2P2 are not to skewer, shame or humiliate its guests but to enlighten, inform, and clarify complex ideas and issues while making us laugh. 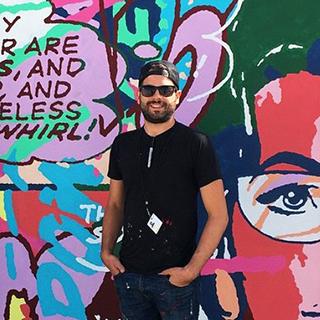 Downtown Minneapolis is getting another mural, thanks to American Express and Hennepin Theatre Trust. Internationally acclaimed, Minneapolis-based artist Greg Gossel will create a new piece on the north wall of 930 Hennepin Ave. at the corner of 10th and Hennepin, a now-vacant building that formerly housed the National Camera Exchange. He began work last Saturday and expects to complete it by Nov. 16.

Gossel’s mural is one of 20 being created around the country for the sixth annual Small Business Saturday, a national day dedicated to supporting local businesses. All are being supported by American Express in partnership with the monthly contemporary art magazine Juxtapoz.

As it did for artist Eduardo Kobra’s Bob Dylan mural up Hennepin at 5th Street, Hennepin Theatre Trust will coordinate the project.

Gossel’s colorful, heavily layered work has been described as a mix of Shepard Fairey and Roy Lichtenstein. About his Minneapolis mural, he said in a statement, “I’ve tried to capture a snapshot of the vitality and diversity of Hennepin Avenue, one of Minneapolis’ most historic thoroughfares. Using my pop art aesthetic, it will be a symbol of empowerment for the many artists, musicians and entertainers that have shaped Hennepin Avenue throughout the decades.”

The building at 930 is currently for sale. Soon it will come with a significant work of public art – a bonus for prospective buyers. 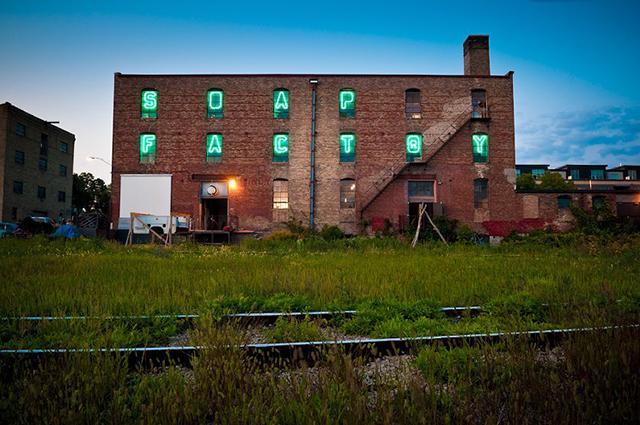 Are we about to lose the Soap Factory, the 25-year-old art gallery in the much older warehouse near the riverfront in Marcy-Holmes? On Friday, MPR published Euan Kerr’s story, “Soap Factory to close its doors at the end of December.” On Monday, Sheila Regan followed up in City Pages with “Uncertainty looms at the Soap Factory.”

What we know from those reports: The Soap will continue its programming for the rest of 2015. Staff will all go to part-time. Two board members have quit; the position of associate director (most recently Beth Loraine Bowman) has been terminated. Cash flow is uncertain, due in part to necessary upgrades made to the building. (Not long ago, it had no heating or AC, and closing for the winter was business as usual.)

A $150,000 grant from the Andy Warhol Foundation went away when former executive director Ben Heywood left in June for a new position in Seattle. And brokers are interested in the property. If you’ve been to the Soap lately, you’ve noticed that it’s being squeezed on all sides by new apartment buildings.

The gallery’s biggest annual fundraiser, the Haunted Basement, ended Nov. 1. The board and staff will have a better understanding of the financial situation once those final figures are in.

Meanwhile, the image on the Soap’s home page for the upcoming exhibition “Three Factory Pieces” is a drawing of the word “Panic!”