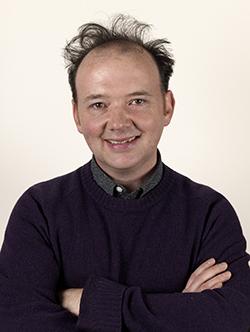 The Minneapolis Institute of Art’s paintings department has a new curator, Patrick Noon has a new title and the museum has a new endowed chair, thanks to Mia supporter and former trustee Elizabeth MacMillan.

Robert (Bob) Cozzolino joins Mia on March 1, 2016, from the Pennsylvania Academy of the Fine Arts, Philadelphia (PAFA), where he has worked since 2004. His writing and curatorial projects there have focused on 20th-century art, and he has also worked with many contemporary artists. He has been called the “curator of the dispossessed” for his championship of underrepresented artists and uncommon perspectives on well-known artists.

Cozzolino curated more than 30 exhibitions at PAFA and is currently working on the first comprehensive exhibition to explore the impact of World War I on American artists, which will open there in November 2016. Interdisciplinary collaboration has been part of his practice – across historical periods, with colleagues in the sciences and in film. In 2014, Cozzolino collaborated with filmmaker David Lynch to organize the largest-ever American museum exhibition of his visual art. He brought in more than 1,000 objects as gifts to PAFA including the Linda Lee Alter Collection of Art by Women, a transformative gift of nearly 500 objects that greatly increased the representation of women in PAFA’s collection.

Cozzolino will be Mia’s new Patrick and Aimee Butler Curator of Paintings. Patrick Noon, who previously held that title and chairs the paintings department, becomes the Elizabeth MacMillan Chair of Paintings. And Mia continues to have a smashing 100th birthday year.

A Chicago native, Cozzolino was born, raised, and schooled in the Midwest, earning his Ph.D. from the University of Wisconsin-Madison. He’s also a percussionist who plays free improvisation, and he hopes to find like-minded musicians in the Twin Cities. Let’s just say that won’t be a problem.

The Cedar Cultural Center has a new executive director. After a yearlong search among local, national and international applicants, it chose one of its own: Adrienne Dorn, a long-time employee who has served as the Cedar’s director of development for the last 10 years. 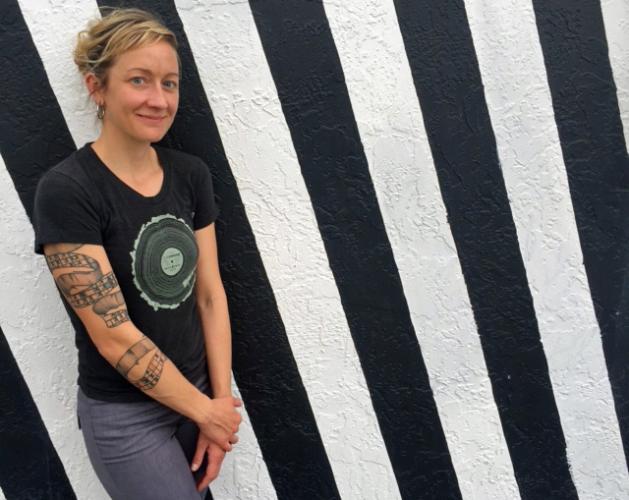 Outgoing executive director Rob Simonds, who announced his retirement in July, has been ED since 2007. Before then, he was a board member for 16 years. Simonds will maintain ties with the Cedar, transitioning into a senior adviser role for the second phase of its $7 million capital campaign to improve physical facilities.

As development director, Dorn spearheaded many Cedar programs, including Minnesota Express, which sent five Minnesota musicians on a statewide tour, and Midnimo, which has made the Cedar a hub for Somali musicians and a catalyst for reviving Somali music. She also drove fundraising efforts to renovate the Cedar marquee and patio.

Dorn said in a statement that her biggest priority as ED will be “to position the Cedar to fulfill its potential in furthering unity, intercultural understanding and access to live music in our growing and diversifying state and region.”

Minneapolis-St. Paul has the Mary Tyler Moore statue and the Peanuts gang. Chicago is getting a 300,000-square-foot, $400 million George Lucas museum. The Chicago City Council has approved Lucas’ proposal for his Museum of Narrative Art, to be located south of Soldier Field along the Lake Michigan shoreline. It will feature “Star Wars” memorabilia and items from his other films (Indy’s hat?). Construction could begin in spring 2016 and the museum could open by 2019. And the high-speed train between here and Chicago could be up and running never.

As part of its National Theater Live broadcast series, the Film Society is showing the now-famous “Hamlet” with Benedict Cumberbatch in the title role. Five shows were scheduled and four have already sold out. Sunday, Nov. 8, at 6 p.m. is the only date with tickets left. Order before it’s too late ($20). It’s probably already too late.

Today (Tuesday, Nov. 3) through Thursday at the Film Society’s St. Anthony Main Theatre: “Extraordinary Tales.” Halloween is over, but you still have several chances to see this, if you can get to a matinee. Spanish director and animator Raul Garcia has created an anthology of five animated shorts based on stories by Edgar Allen Poe, featuring the voices of Christopher Lee (in his final film), Bela Lugosi, Julian Sands, Roger Corman and Guillermo del Toro. Animators and fans of animation, don’t miss this; each film is in a different style, drawing on such influences as comic books, 19th-century photography and expressionism. FMI and tickets ($6).

Thursday at the University Club: “Liederabend.” Because many Twin Cities musicians perform in the annual Lakes Area Music Festival in Brainerd, and because many audience members travel there from the Twin Cities to hear them, the festival now presents a winter series in the metro. For the past two years, events were held at the Woman’s Club in Minneapolis. This year they’re moving to the University Club in St. Paul. Tonight’s concert is an evening of German song performed by baritone John Taylor Ward, pianist Scott Lykins and Minnesota Orchestra flutist Roma Duncan. The program includes Beethoven’s “An die ferne Geliebte” (To the Distant Beloved) and Schubert’s “Schwanengesang” (Swan Song). Cocktail hour begins at 6 p.m. and the concert starts at 7. It’s free, open to the public, and no tickets are required; just show up. Future concerts are scheduled for Jan. 14 (Mozart, Poulenc, Roussel), Feb. 25 (season announcement event) and May 5 (Stravinsky’s “Soldier’s Tale” and more TBA). The concerts are also held in other locations throughout the state. Check the website FMI.

Thursday at the U’s Continuing Education and Conference Center: Headliners: “Stronger, Faster, Brighter: Wearable Technology and the Future of Clothing.” What will we wear years from now? Will we look like the Jetsons, strut like the “Star Trek” crews or schlepp around in drab jumpsuits? Lucy Dunne, an associate professor at the U who directs the apparel design program and wearable technology lab, will give us a glimpse at future possibilities and fashion runways. It seems we’ll be wearing clothes that make our bodies stronger and allow us to age in place, communicate instantaneously through text and speech, maybe even shapeshift. 7 p.m. on the St. Paul campus. FMI and registration ($20). 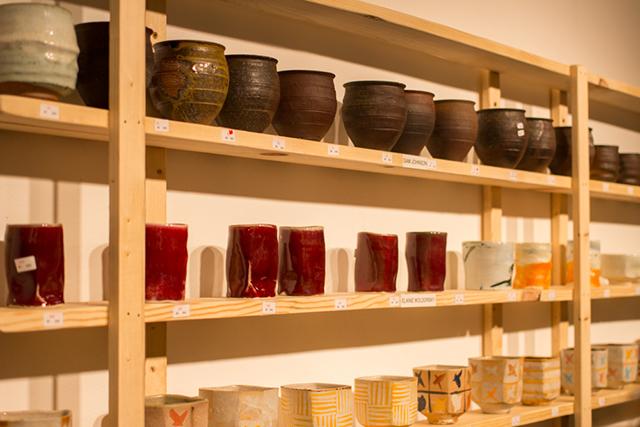 Friday at Raymond Avenue Gallery: 2nd Annual Yunomi Invitational. At last year’s 1st Annual Invitational, yunomis – handleless Japanese-influenced ceramic teacups, also sometimes called tea bowls – sold like stacks of buttermilk pancakes. The small St. Paul gallery was packed with potters and collectors. Yunomis are small, relatively inexpensive and practical pots, used in Japan for drinking hot water or tea, and often used in Minnesota (as the gallery helpfully points out) “for drinking wine, etc.” Plus they’re lovely to look at and comforting to cradle in your hands. Last year’s show featured work by 25 area potters; this year’s has expanded to 36, which means it will be more of a madhouse, but in a good way. Come see yunomis by the legendary potter Warren MacKenzie (who started it all by bringing Japanese techniques and ideas home to Minnesota and forever influencing generations of artists) and others including Robert Briscoe, Dick Cooter, Guillermo Cuellar, Willem Gebben, Peter Jadoonath, Matt Krousey, Mike Norman, Jeff Oestreich, Monica Rudquist, Chuck Solberg, Will Swanson and Jason Trebs. Artist’s reception 6-8 p.m. Gallery hours during the show: Mondays-Fridays 10 a.m. – 4 p.m., Saturdays 12 noon – 4 p.m. Through Dec. 19. 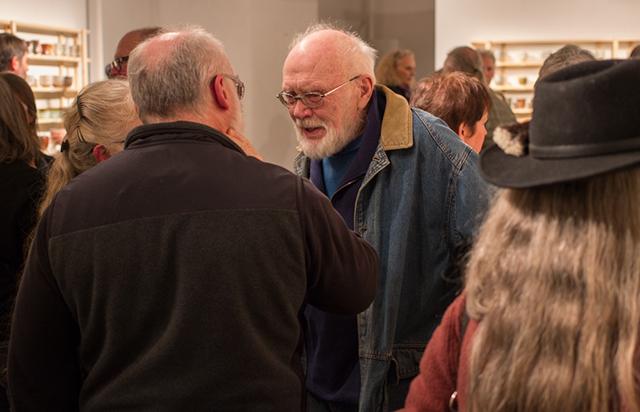