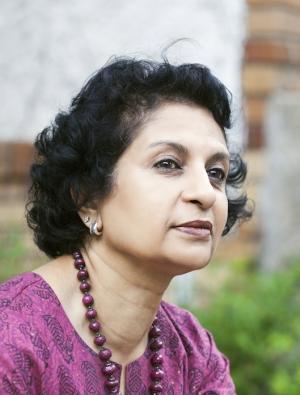 Ragamala Dance is holding an open house this weekend, and we’re all invited. There will be singing and dancing, live music and poetry. The lower level of the Landmark Center will be decorated like a living room in southern India. Snacks will be available.

The event is called “An Ode to Navarathri Kolu,” and it’s something Ranee Ramaswamy – Ragamala’s founder, McKnight Distinguished Artist, Doris Duke Performing Artist, member of the National Council on the Arts – has been dying to do for years. Growing up in the southeast Indian state of Tamil Nadu, she loved the annual festival of Navarathri, nine nights in fall during which friends and neighbors visit each other and share the arts. It’s traditional, deeply rooted in symbolism and ancient stories, but also informal and warm.

“I have a friend who’s a very famous singer,” Ramaswamy said, “and she would sing. Then the neighbor who goes off key would sing. The important thing is, art is bigger than you. You share what you have. It’s not about how good you are. … We’re hoping to bring that feeling of oneness that connects community with the arts.”

Ragamala won a first-year Knight Arts Challenge grant to fund the celebration. It commissioned videographer and Nimbus Theatre company member Caitlin Hammel to make a film showing how five South Indian families in the Twin Cities celebrated Navarathri in their homes earlier this year. (The actual festival took place in October, when Ragamala was out of the country, which is why they’re calling this an ode.) 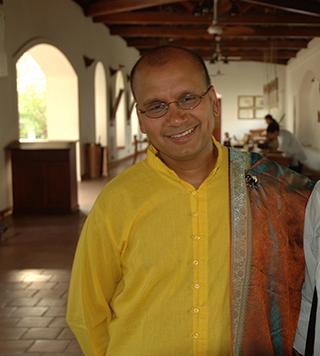 They retained the celebrated chef and Emmy Award winner Raghavan Iyer – author of “Betty Crocker Indian Home Cooking,” “The Turmeric Trail,” “660 Curries” and “Indian Cooking Unfolded” – to prepare traditional snacks and speak about the interconnectedness of food and ritual in India. Iyer has his own memories of Navarathri: “Who cares who sang? I would go from house to house to eat the snacks.” (Side note: In our home, Raghavan’s recipes rule.)

“An Ode to Navarathri Kolu” is part of a whirlwind year for Ragamala, the Minneapolis-based Bharatanatyam dance company that is quickly becoming known nationally and internationally. They began 2015 with performances in India, then toured 18 venues in the United States. Company members (and Ranee’s daughters) Ashwini and Aparna gave ecstatically reviewed solo performances in New York, after which the company spent 24 days in Abu Dhabi, performing and doing a creative residency.

They won’t dance as a company this weekend, but individual members will dance. And “we’ll all be in our Indian clothes,” Ranee said.

It’s going to be casual, and organic, and emphatically not just for Indians. “Walk in and out, go listen to music, eat a snack, play a game, look at the film, watch some dancing,” Ranee said. Will this maybe become an annual event? “I would like that. This is a long-term dream of mine.”

If you love music and film, you probably already know about Sound Unseen, the festival of documentaries, narratives and short films about music and musicians, fans and bands. The 16th annual Sound Unseen starts tonight (Wednesday, Nov. 11) and continues through Sunday, screening more than 30 films at four locations: McNally Smith, Bedlam, the Trylon Microcinema and the Bryant-Lake Bowl Theater. Several directors will be in attendance and some films will be followed by live music.

Although there are no jazz films this year, about which we’re kind of grumpy, it’s a colorful, eclectic, well-curated line-up, with something for anyone who has ever gone to a concert, played a recording, streamed music or sung in the shower. Almost all are Minnesota, Twin Cities or U.S. premieres. Here’s what we like, in chronological order. (Full disclosure: This writer is on the jury for the six films in competition, but the following list has nothing to do with any of that.)

Tonight (opening night): The documentary “MAVIS!” about the one-and-only Mavis Staples. Friday: “Heart of a Dog,” a personal film essay by Laurie Anderson. Saturday: “Landfill Harmonic,” about Paraguay’s recycled Orchestra of Caetura, a group that plays instruments made of garbage. Because the pull to make music overcomes all obstacles. Saturday: “Morphine: Journey of Dreams.” Because we love their album “Cure for Pain.” Saturday: Albert Maysles Tribute screening of “What’s Happening! The Beatles in the USA.” The film of The Beatles’ arrival in America in February 1964 that inspired “A Hard Day’s Night.”

Sunday: Albert Maysles Tribute screening of “Soldiers of Music: Rostropovich Returns to Russia.” Winner of a 1991 Emmy. Sunday: “The Winding Stream.” The story of the Carters and the (Johnny) Cashes. Sunday: “Akounak Tedalat Taha Tazoughai (Rain the Color of Blue with a Little Red in It).” An homage to “Purple Rain,” set among the sub-Saharan Tuareg people, which has no word for “purple.” Sunday: Albert Maysles Tribute screening of “Gimme Shelter.” The documentary about the Rolling Stones’ 1969 American tour and the disaster at Altamont. Yes, this year’s festival honors Maysles, the legendary documentarian who died earlier this year.

The easy-to-use website has everything you need to know and links to tickets, most $10-$12.

Tonight (Wednesday, Nov. 11) at the Electric Fetus: Book release for Rick Shefchik’s “Everybody’s Heard About the Bird: The True Story of 1960s Rock ’n’ Roll in Minnesota.” Shefchik will host a discussion and a jam session with members of the Trashmen, the Gestures, the Underbeats and Gypsy, the Castaways, the Bops and more, after which they’ll all sign copies of the book. Jim Walsh called it “essential and invaluable,” and you should take his word for that. 7 p.m. Free. 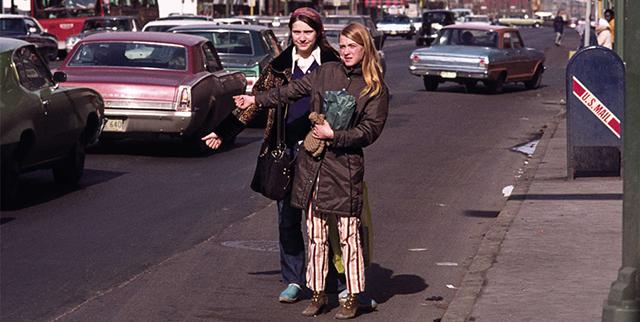 Photo by Mike Evangelist
Mike Evangelist was a 17-year-old from the suburbs when he snapped photos of shoppers on Nicollet Mall, movie houses, and people crowding the sidewalks pre-skyways.

Thursday at the Mill City Museum: Opening reception for “Downtown: Minneapolis in the 1970s.” Mike Evangelist was a 17-year-old from the suburbs when he snapped photos of shoppers on Nicollet Mall, movie houses, and people crowding the sidewalks pre-skyways. Forty years later, he rediscovered his photos. The exhibition event also serves as a release party for a book of the same name from the Minnesota Historical Society Press featuring Evangelist’s photos and Andy Sturdevant’s words. In the Mill Commons. 6 to 9 p.m. Free. Remarks by Evangelist and Sturdevant at 7 and 8:30. Cash bar and food available for purchase. Show closes April 3.

Opens Friday at Brave New Workshop: “The Trump Who Stole Christmas.” BNW’s holiday show is always a safe bet (well, safe for those who aren’t being mocked, flayed and skewered), and we can’t imagine a better jumping-off point than Donald Trump meets the Grinch. FMI and tickets ($18-$36). 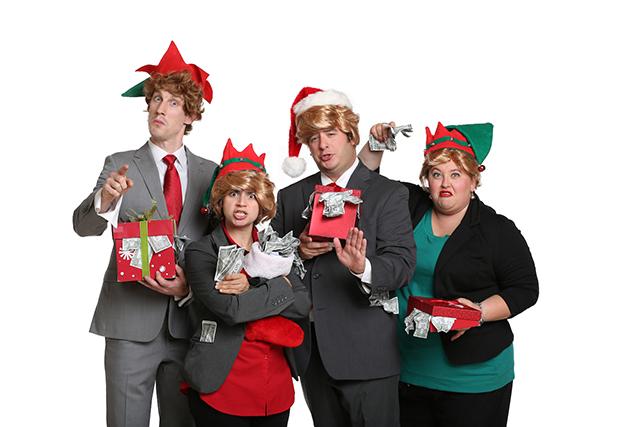 Photo by Dani Werner
“The Trump Who Stole Christmas”

Saturday at the Amsterdam: Miranda Cuckson: “Sun Propeller.” The estimable Liquid Music series continues with a solo performance by the highly praised violist and violinist. Cuckson will play a program of new music by living composers including Dai Fujikura, Kaiji Saariaho, Ileana Perez-Velasquez, Richard Barrett and Nina C. Young on themes of wind, air and light. Young will be present to add electronics. Never heard of any of them? Not a problem. If you’re curious, willing and have an open mind, Liquid Music – curated by Kate Nordstrum, presented by the SPCO – is always worth attending. And always sold out by concert time, so get your tickets soon. 8 p.m. FMI and tickets ($15). 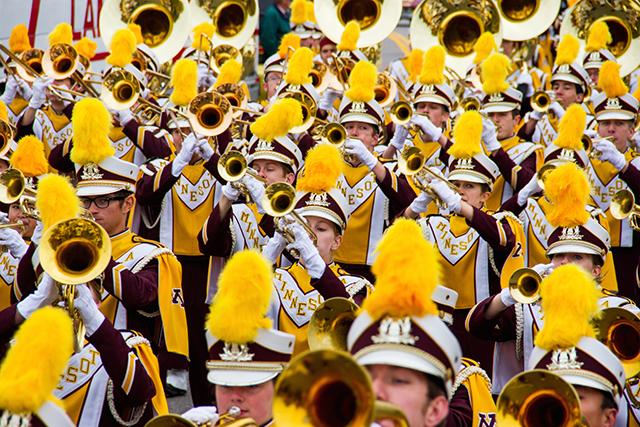 Saturday and Sunday at Northrop: The 54th Annual Marching Band Indoor Concert. The 320 members of the University of Minnesota Marching Band, on the big stage and in the aisles. Really, what else needs to be said? 7 p.m. Saturday, 2:30 p.m. Sunday. FMI and tickets ($20-$30).