Can an opera raise the hair on the back of your neck? There were moments during Friday’s workshop presentation of “The Shining” – commissioned by the Minnesota Opera, based on the novel by Stephen King – when that seemed like a real possibility. Times when the harp sounded ominous rather than celestial. When the big basses were the roiling soundtrack for a dark tale. When the strings rose higher and higher and the timpani boomed. When a little boy’s voice piped, “What’s ‘redrum’?”

And this was just a workshop in the big, bare room of the Opera Center in Minneapolis, with Michael Christie leading the full orchestra, the cast in street clothes, and the creative team – including Pulitzer Prize-winning composer Paul Moravec, librettist Mark Campbell, Minnesota Opera artistic director Dale Johnson and stage director Eric Simonson – seated at a table facing the music. For the final production, Simonson said, “We’re going to coordinate the media and the set and the lights and the sound and the music, all at once, to see if we can make people jump out of their seats.”

We’ll have to wait until May, when the opera has its world premiere at the Ordway Center, to see how that works. After hearing the first half, everyone not involved in the production was politely invited to leave. The second half is when, in Moravec’s words, “the action accelerates and everything goes to hell.”

But there was time for a Q&A that gave us some insight into the process and what we can expect next spring.

If you know Stanley Kubrick’s 1980 film, put it out of your mind. All of it. As Moravec said, “This is based on the book. End of story.” (King famously hated what Kubrick did with his novel.)

Campbell explained that the “cockamamie idea” (his words) to turn King’s horror best-seller into an opera traces back to Simonson. “And then there was the process of getting the rights,” Campbell added. “There was a while when I thought we should rename this  ‘The Signing.’ ” Everyone laughed at that.

Moravec seems to have relished the project. “It wasn’t hard to adapt [King’s book] because it’s practically an opera to begin with. … Opera for me is about three things: love, death and power. … This story has all of those elements in spades. … For all of its sophistication, opera is very simple. It’s primordial. The reason it speaks to us so deeply is it deals with who we are on the most fundamental level. That’s certainly what Stephen King does in ‘The Shining.’ He’s dealing with rock-bottom fundamental issues in a high-voltage kind of way. And that’s operatic.”

Campbell added, “The libretto is an adaptation of the novel. It was mainly a matter of condensing the novel from 600-plus pages into something that will last for two hours on stage and allow for the expression of music.” We suspect “condensing” doesn’t quite describe what Campbell does, or why he’s in such high demand. The libretto we saw is 34 pages long. A series of four orchestral interludes, all in the first act, help to show the passage of time through music and action without words. 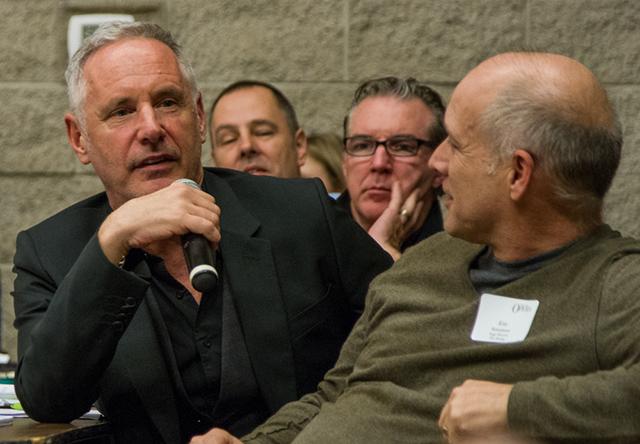 About the music, Moravec said, “This is one long composition from beginning to end. Two hours of music. … I try to give everyone their own way of speaking, their own music. Halloran doesn’t sound like Wendy, who doesn’t sound like Jack. … There are leitmotivs. In the second act, you’re going to hear everything you heard in the first act coming back in various forms.”

How else do they plan to scare us silly? Moravec: “One way you do this is to create a kind of psychological unease and disquiet in the audience.” Simonson: “Paul [Moravec] has given us a great framework, because the music is very scary.” Johnson: “It’s a slow buildup to chaos. … It’s how Hitchcock tells a story.”

To close the Q&A, Moravec shared a key to understanding his approach: “In my view, this is the story of Abraham and Isaac in 1975.” [King’s novel was first published in 1977.] “You have a guy who has two sets of instructions. One is to protect his son, one is to kill him. … It’s unresolvable.” And that, to Moravec, makes for a great story.

“The Shining” opens May 7 and continues through May 15, with four performances. Tickets are available now ($25-$200). 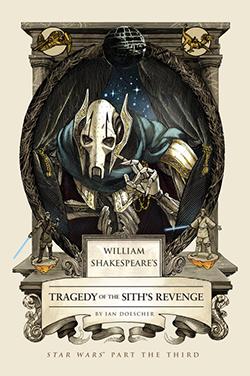 Tonight (Tuesday, Nov. 24) at Magers & Quinn: Ian Doescher reads from “William Shakespeare’s Tragedy of the Sith’s Revenge.” Something is rotten in the state of Corsucant! The author of the New York Times best-seller “William Shakespeare’s Star Wars” returns with more tales set in a galaxy far, far away but sounding strangely (and amazingly) like the Bard of Avon, in iambic pentameter. Forsooth, you may wear a costume and vie for a prize. 7 p.m. Free.

Friday through Sunday at the Ordway Concert Hall: Jonathan Biss Plays Beethoven. This is the first concert in an ambitious, imaginative five-year SPCO project called Beethoven/5, which pairs the exciting young pianist with a living composer. Each year, Biss will perform a different Beethoven piano concerto and also give the world premiere of a new piano concerto inspired by/responding to the Beethoven and commissioned by the SPCO. This year’s combination is Beethoven’s Piano Concerto No. 2 and composer Timo Andres’ “The Blind Banister,” about which Andres has said, “I started writing my own cadenza to Beethoven’s concerto and ended up devouring it from the inside out.” (Liquid Music fans will remember Andres from last spring’s “Work Songs” at the SPCO Center.) Next year it’s Beethoven 1 and a new work by Sally Beamish, then Beethoven 4 and Salvatore Sciarrino, then Beethoven 3 and Caroline Shaw, and finally Beethoven 5 and Brett Dean. So not only will we hear the Beethoven-obsessed Biss five years in a row (he’s partway through recording all 32 of the piano sonatas and hopes to finish by 2020), we’ll also hear five brand new works. This weekend’s program begins with Mozart’s Quintet in E-flat for Piano and Winds. 8 p.m. Friday and Saturday, 2 p.m. Sunday. FMI and tickets ($33/$53). 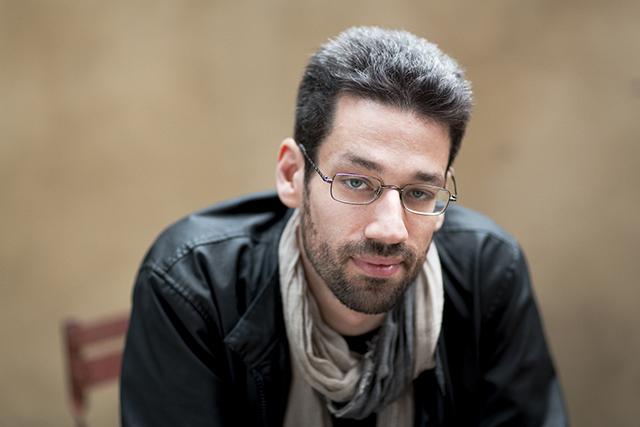 Saturday at the Heights Theater: Patty and the Buttons 2nd Annual Vaudeville Show. Is it too much to hope that the Twin Cities has a new Thanksgiving weekend tradition? Like last year’s “Vaudeville Spectacular,” this year’s show features live music and performances, silent films, and the Heights’ Mighty Wurlitzer (with Harvey Gustafson, who else, at the manuals). Performers include the country music duo Yellow-Bellied Sapsuckers, puppeteer Liz Shacterle, tap dancer Miss Molly, cowboy artist Pop Wagner, folk musician Adam Kiesling, and the always wonderful Christina Baldwin presenting music of vaudeville starlets. And hosts Patty and the Buttons, led by Patrick Harison on accordion. 1 p.m. $20 at the door, $15 advance. 17 and under free. 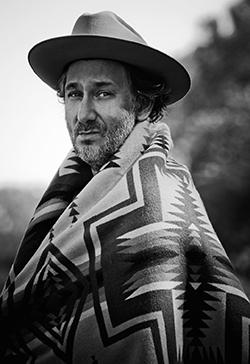 Photo by Darin Back
Adam Levy

Saturday at the Cedar: Adam Levy Solo “Naubinway” Record Release. The first solo outing by the singer-songwriter of The Honeydogs was born in a dark place: the suicide of his 21-year-old son, Daniel, in 2011. Numbed by grief, Levy wrote songs about his own pain – and that of Daniel, who struggled with mental illness. This is not the celebration of life one might expect in such circumstances, but a loving father’s way of dealing with death and loss in tender, aching, beautifully crafted songs. The album is illustrated by highly detailed, sometimes disturbing drawings by Daniel that give us glimpses into his complicated inner world. Doors at 7 p.m., show at 8. FMI and tickets ($12 advance/$15 day of show).