Driving into St. Paul along Shepard Road on Saturday evening, we weren’t sure what we were seeing. Why was the city’s mighty steam plume lit up and purple? Was it a Prince thing? Then we realized we had caught a test run of the Plume Project, the Knight Arts Challenge Grant winner we’ve been waiting for, partly because it’s so extravagantly ambitious.

The plan: to turn the steam from District Energy St. Paul into a giant canvas in the sky, a screen for light shows and inspiration for conversations about sustainable energy. Public art on a grand scale, about as ephemeral as it gets.

St. Paul’s response to the energy crisis of the 1970s, District Energy was launched as a demonstration project in 1983. Fueled by a renewable resource (wood chips), it heats and cools most of the downtown. The cloud billowing up from the tower is water vapor. A lot of people think the steam is smoke polluting the air, a misapprehension the Plume Project hopes to dispel.

A team of local artists – Aaron Dysart, Emily Stover and Asia Ward – worked with District Energy on three projects. The first, Stover’s “Rumblings,” started on Tuesday of this week. Lighting in the plume is synchronized with recordings of poems commissioned from six local poets. When you call 651-383-1378 to hear a 90-second poem, the lights will pulse with the rhythm of the words. Unless you put your phone on speaker, you’re the only person who will hear the poem. It’s a one-person-at-a-time experience; if there’s a queue, you’ll hear music while you wait. Go where you can see the plume, then try it anytime from 5-10 p.m. Sundays through Thursdays or 5-11 p.m. Fridays and Saturdays through Dec. 8.

Dysart’s project, “Solar System,” will use data from NASA’s Solar Dynamic Observatory to create a light show related to sunspots, storms and flares – activity on our solar system’s original power plant. It runs Dec. 22 through Jan. 8. Ward’s “Plume Coloring Contest” will project visual images by community members onto the plume. It spans the St. Paul Winter Carnival, Jan. 28-Feb. 7. Every night will be different.

In a year when Travel and Leisure included Minneapolis/St. Paul on its list of America’s best cities for foodies (we’re No. 5), Spoon and Stable was named Outstanding Restaurant in the fifth annual Charlie Awards, announced Sunday at the Pantages. Chef Gavin Kaysen’s North Loop restaurant, not yet a year old, also had this year’s Outstanding Bartender, Robb Jones.

Molly Broder, to whom expansion means having three restaurants at the same Minneapolis intersection (Broders’ Cucina Italiana, Broders’ Pasta Bar and Terzo, all at 50th and Penn), received the Lifetime Achievement award. We’re waiting for her to take over Bruegger’s Bagels nearby.

The Charlies were named for the late, still lamented Charlie’s Café Exceptionale, which stood at the corner of 7th Street and 4th Ave. S. for 49 years.

Tonight (Wednesday, Nov. 18) at the Park Square: Athol Fugard’s “My Children! My Africa!” Warren C. Bowles, Devon Cox, and Cage Sebastian Pierre star, James A. Williams and Jamil Jude co-direct the regional premiere of Fugard’s classic, still germane play, set in South Africa near the end of apartheid. Williams knows it from all sides; he was idealistic teacher Mr. M in the Signature Theater’s applauded 2012 production in New York. On the Boss Stage. 7:30 p.m. FMI and tickets ($40/$60). Ends Nov. 29.

Thursday at Westminster Town Hall Forum: Andrew Bacevich: “The Indispensable Nation? America’s Role on the World Stage.” After Bill Clinton declared the U.S. “the indispensable nation,” Madeleine Albright elaborated, “If we have to use force, it is because we are America; we are the indispensable nation. We stand tall. We see further than other countries into the future.” Writing for the Wilson Quarterly, Andrew Bacevich noted, “Such sentiments … play well in Peoria, and accord precisely with what most Americans want to believe.” The national security expert, historian, former Boston University professor and best-selling author (“Washington Rules,” “The Limits of Power,” “Breach of Trust”) may open some ears and raise some hackles. 12 p.m. at Westminster Presbyterian Church. Free. Bruce Dayton’s memorial service follows at 4 p.m. 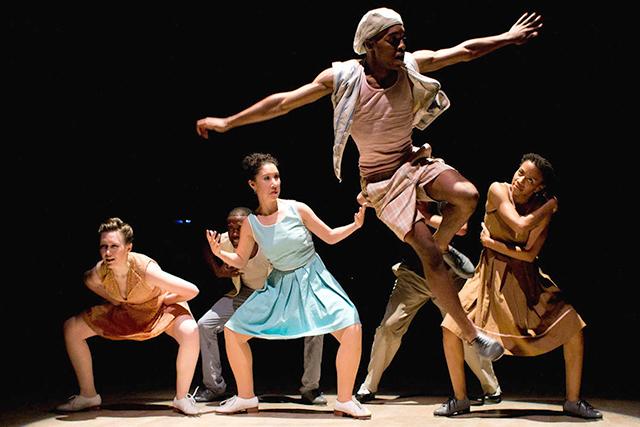 Thursday at Northrop: Dorrance Dance with Toshi Reagon and BIGLovely. Tap artist, choreographer, and MacArthur Fellow Michelle Dorrance brings her tap-dancing company to the Northrop stage, with live blues and and folk music by Reagon and her band. Reagon is the daughter of Bernice Johnson Reagon, founder of Sweet Honey in the Rock (which has tons of fans in Minnesota) and goddaughter of Pete Seeger. This promises to be an evening of high-energy dance, stellar music and the percussive sounds of taps on the Northrop’s big stage. 8 p.m. FMI and tickets ($38-$58). Performance preview at 6:30 p.m. in the Best Buy Theater.

Thursday and Friday at the Walker: Tanya Tagaq in Concert with Nanook of the North. We stumbled across this video months ago and decided if Tanya Tagaq ever came to town, we would crawl across hot coals to see her. Watching still gives us goosebumps. Tagaq is an Inuit throat singer creating powerful, personal, emotional music; this performance is her response to “Nanook of the North,” is a 1922 silent film about an Inuit community in northern Quebec. You might not love it, but you’ll never forget it. With percussionist Jean Martin and violinist Jesse Zubot. 8 p.m. FMI and tickets ($25/$22 Walker members).

Thursday through Saturday at MCAD: 18th Annual MCAD Art Sale. This is the big one: over 6,000 original works of art by some 450 MCAD students and recent graduates. Visual art of all kinds, everywhere you look, all priced to sell: The average price is $90. All proceeds go directly to the individual artists or to the MCAD Art Sale Scholarship Fund. Thursday (opening night) 6 to 9 p.m., tickets $150. Friday 6 to 9 p.m., tickets $25 advance, $30 at the door. Saturday 9 a.m. to 5 p.m., free. Thursday and Friday tickets here. Art sale preview here.