1. Not quite a cup of sugar
The Minneapolis Institute of Art threw itself a yearlong 100th birthday party that included a new and different surprise every week. For one of its January surprises, it borrowed a small Vermeer from Amsterdam’s Rijksmuseum.

“Woman Reading a Letter,” one of only 34 known Vermeers in existence, was on display in the main floor Cargill gallery until May 3, where anyone could walk in and see it up close for free. It would be followed in May by Raphael’s “The Madonna of the Pinks,” on loan from London’s Tate Gallery, and in August by van Gogh’s “Irises” from the Van Gogh Museum in Amsterdam. Three of the world’s most famous paintings paid us a visit and hung out in the Cargill.

Mia called this series “Masterpiece in Focus,” but the subtext was, “We’re big enough and important enough that we can do this sort of thing.” You can also see Mia’s stature in the revelatory “Delacroix’s Influence” exhibition now on view – but only until Jan. 10, so hurry.

2. That undulating ceiling
The opening of the $42-million Ordway Concert Hall in March gave us a spectacular new place to experience live, acoustic music and launched a promising new chapter in the story of its main tenant, the St. Paul Chamber Orchestra.

Not only is HGA architect Tim Carl’s AIA Minnesota Honor Award-winning design ravishingly beautiful – if the ceiling were lower, you’d want to pet it – but Paul Scarbrough’s acoustics made the hall itself an instrument the musicians are learning to play. They’re excited to be there, and grateful to the community for making it happen, and dying to show us what they can do. The audiences seem extra respectful and attentive; we’ve never (so far) heard a cell phone go off during a concert, which is kind of a miracle. This could very well be the start of a golden age for the SPCO.

3. Honoring the poet
The great Minnesota poet Robert Bly was feted twice in April. As luck would have it, April was National Poetry Month, and the largest literary conference in the nation was taking place in Minneapolis.

A Bly tribute at the conference drew a standing-room crowd, and an event two days later at Plymouth Congregational Church continued the love fest. The occasion was the release of Bly’s latest book, “Like the New Moon,” but it wasn’t like any book release we’d ever been to. Twenty-four poets and friends, many of whom had stayed in town after the conference ended, talked briefly about what Bly had meant to them and read one of his poems aloud. Then Bly read, thumping his cane on the floor for extra emphasis. 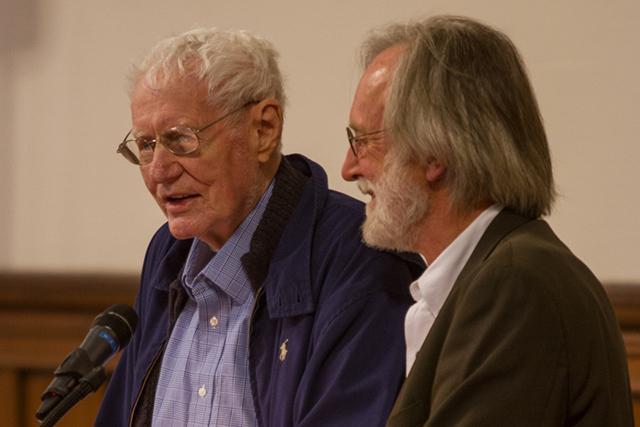 Photo by John Whiting
With Jim Lenfestey at his side, Robert Bly, at left, took the podium and read several poems from his book.

Bly influenced countless poets to look at snow and corn with fresh eyes and introduced American readers to Rumi and Tomas Tranströmer. He turned 89 on Dec. 23. A new documentary film about him, “Robert Bly: A Thousand Years of Joy,” will screen at next year’s Minneapolis St. Paul International Film Festival.

4. Hot pies
When Mark Benninghofen made his grand entrance in Theater Latté Da’s “Sweeney Todd” in September, carried aloft by four actors, it was thrilling. When he landed on his feet and sang “Attend the tale of Sweeney Todd!” we were hooked.

Gritty and grisly, with a cast that also included Sally Wingert and Tyler Michaels, staged on a demented playground of a set, this was one of the best productions we’ve seen anytime, anywhere. It also perfectly fit the Ritz, the previously nomadic Latté Da’s new home. 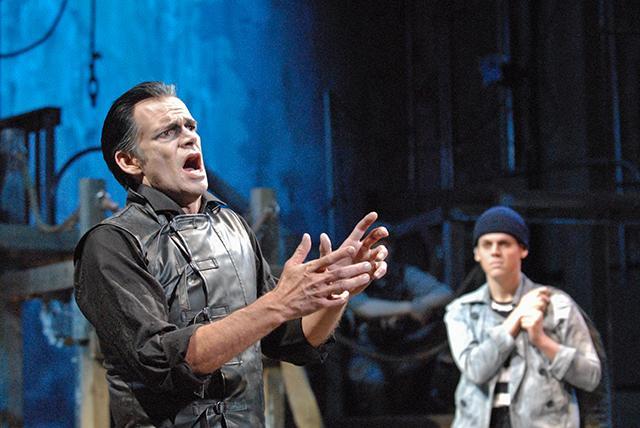 We feared for the Ritz’s survival for a while – its future seemed doubtful without Ballet of the Dolls – and are happy to see Peter Rothstein’s group move in. They’ve made their offices there as well.

5. Bellwether
At the Minnesota Orchestra’s annual meeting earlier this month, the musicians did something totally unexpected: They gave $250,000 of their own money to the orchestra. People gasped when acting associate principal bass Kate Nettleman delivered the news.

This wasn’t money out of the musicians’ pockets, but from a 501(c)3 nonprofit they formed during the 16-month lockout for income earned from their self-produced concerts and private donations. The 501(c)3 was their safety net, their just-in-case fund. Now they feel it’s no longer needed. The orchestra is a vastly different organization from what it was 22 months ago, when the lockout ended. It’s time to move on.

The 501(c)3 will be dissolved (if it hasn’t been already), and the $250,000 will create the Bellwether Fund in honor of Lee Henderson, a friend and advocate for the orchestra who died suddenly earlier this year. And Minnesota Orchestra President and CEO Kevin Smith has vowed that at next year’s meeting “there will be no reference to the lockout.”