More than three dozen Minnesota arts organizations will share almost $1 million in grants from the National Endowment for the Arts. Announced Wednesday, the NEA’s first round of FY 2016 funding spread more than $27.6 million among all 50 states, the District of Columbia, American Samoa and Guam.

The new grants launch what the NEA is calling its “next 50 years” of support for the arts. We hope they’re right about that. In its first 50 years, the NEA awarded more than $5 billion in grants to recipients in every state and U.S. jurisdiction, the only arts funder in the nation to do so. Each year’s funding is a congressional battle.

For the most recent funding round, 237 panelists reviewed 1,855 applications to determine the 1,126 awardees. Here’s a complete list [PDF], sorted by city and state, if you’re curious. To get a sense of how these grants are affecting arts organizations around the country, search #NEAFall15 on Twitter.

If you haven’t been to Crooners lately (or ever), there’s a new 9-foot reason to go. The live-music-lounge-and-supper-club on Moore Lake north of 694 now has a concert Bösendorfer, one of the world’s most prestigious pianos, famous for its warm, singing tone and its price tag.

Many venues with live music don’t have pianos, period; performers lug their own keyboards and amps to the gig. With the addition of the Bösendorfer, Crooners now has two grand pianos, one in the lounge and the Big B in the newly christened Dunsmore Room, named for Crooners co-founder Larry Dunsmore, who passed away earlier this year.

The Bösendorfer makes a trip to Crooners a must – that and the music calendar, which has been reliably populated with familiar names almost since the doors opened in mid-November 2014. Performers in the lounge have included Patty Peterson, Andrew Walesch, Debbie Duncan, Maude Hixson, Vinnie Rose, Arne Fogel, Benny Weinbeck, Ginger Commodore, Chris Lomheim, Dave Graf, Butch Thompson, Phil Hey, Laura Caviani, Dave Karr and the Twin Cities Seven. The musicians are paid by the club (very fairly, we hear). There’s no cover or tip jar. Shows in the Dunsmore Room have a minimum purchase price (think drinks) or fixed-price dinner requirement, both beyond reasonable in today’s market.

Among the upcoming shows in the Dunsmore Room are a pre-opening holiday concert by the Laura Caviani Trio on Dec. 17, the grand opening on Dec. 22 with the Dave King Trio, and a Birthday Club series launching Sundays in January, for which pianist Dan Chouinard will play music by someone born on each day.  Shows start at 7. Call 763-571-9020 for reservations.

NEA grant winner Northern Lights.mn ($20,000) has announced a new direction for Northern Spark, the annual all-night, dusk-to-dawn arts festival. Inspired in part by the megastorm during Northern Spark 2014, which forced the closure of many outdoor events, it will devote the next two years of the festival and other programming to how artists address climate change.

Northern Spark 2016 (June 11) and Northern Spark 2017 (June 10) will be linked by a year of projects, events and workshops exploring climate challenges and solutions in sites across the Twin Cities. Topics will include the future of food, new relationships to non-human species, and radical river ecologies. Collaborations will be created among artists and activists, scientists, neighborhoods and environmental organizations. For Northern Spark 2017, interactive art projects will fill the landscape along the Green Line from Minneapolis to St. Paul. That will be something to see and explore.

Friday at the Bell Museum: Bell Social: The Huge Worlds of Tiny Spaces. Art and science, music and food, large and small meet at this month’s Bell Social. Observational astrophysicist Larry Rudnick chats about “The Biggest Things in the Universe,” the St. Paul indie rock band Communist Daughter performs, and you can view an exhibition by the Fall 2015 Bell artist-in-residence Shreekishen Nair, whose work is inspired by wee things like insects, plants and freshwater crustaceans. Food truck and cash bar. 7 – 10:30 p.m. FMI and tickets ($15/$10). 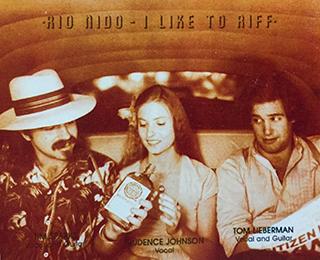 Friday at the Dakota: Rio Nido. In the 1970s and ’80s, it seemed that everyone in the Cities knew the vocal jazz trio Rio Nido: Tim Sparks, Prudence Johnson and Tom Lieberman. After three albums and countless dates, they all went their separate ways. Sparks become an award-winning, restlessly inventive solo guitarist whose virtuosic adaptation of Tchaikovsky’s “Nutcracker Suite” is a jaw-dropper (how many fingers does the man have?) and whose recordings for John Zorn’s Tzadik label are regulars on our playlist. Johnson forged a career as a singer and entertainer – in clubs, on “A Prairie Home Companion,” in films, on stages (most recently at the Fitzgerald in “The Gales of November”) and on several recordings. Lieberman spent years on-air and behind the scenes at APHC and from there went on to writing, composing and producing for radio, TV, stage and screen. Earlier this year, the three were asked to reunite for a benefit, had fun, and decided to try it again. This could be the start of something big, or it could be your final chance to see them live, a gift from the gods of music. Here’s how Rio Nido sounded their first time around. We can’t imagine that age and experience have done anything but improve them. 7 and 9 p.m. FMI and tickets ($35/$25).

Friday at the University of St. Thomas (St. Paul) in the Chapel of St. Thomas Aquinas: “Christmas with Cantus.” A sure thing every holiday season, the Christmas concert by the acclaimed nine-member men’s vocal ensemble touches the emotions with music from across five centuries. 7:30 p.m. FMI and tickets (prices vary). Cantus brings this concert to several venues; check the schedule for the one nearest you. 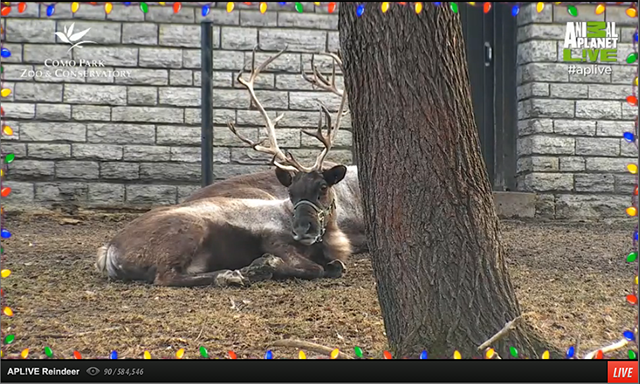 Daily on your computer, tablet or smartphone: Reindeer Cam at Como Park Zoo. Visit female reindeers (caribou) Abby and June Bug 24/7 on Animal Planet Live. Watch for Santa’s visits Friday, Dec. 18, Tuesday, Dec. 22, and Wednesday, Dec. 23 at 1 p.m. CT. Or visit in person and explore the Christmas-themed barn. The zoo is open every day from 10 a.m. – 4 p.m. and admission is always free.

Saturday at the newly remodeled TPT Studios: Downton Abbey Holiday Festival. See the first episode of the sixth and final season (sniff, sniff) three weeks before it airs on “Masterpiece” in January. Enjoy strolling carolers in period costumes. Shop the marketplace. Come in costume if you want; Don Shelby will judge a costume contest. Unless you’re adept at navigating the multiple labyrinthine levels of nonprofit membership (Theseus had it easy), skip the TPT website, call 651-229-1500 and say “I want to go to the Downton Abbey thing.” You’ll need to become a member or make an additional gift, and choose a time (4 p.m. or 6 p.m.). The nice person who answers the phone will help you.

Sunday at the Highland Park Community Center: Minnesota Jewish Theatre Company’s “The Chanukah Guest.” After a sold-out first year (and world premiere) in 2014, this charming, all-ages play based on the children’s book by Eric A. Kimmel actively engages youngsters in the audience; kids can even help with set pieces and props placement. Written by Jenna Zark, directed by Candace Barrett Birk. 1 p.m. FMI and tickets ($18).