If you’re curious to know what Twin Cities theater will look like going forward, the U’s Rarig Center was the place to be Friday night. Before a large and attentive crowd of mostly students, MPR’s Marianne Combs led a conversation with the new artistic directors of four area theaters: Sarah Bellamy of Penumbra, the Guthrie’s Joe Haj, the Jungle’s Sarah Rasmussen and Randy Reyes of Mu Performing Arts.

All have taken over (or, in Bellamy’s case, are in the process of taking over) from longtime leaders in a shift considered so significant that it has gained national attention. Three are stepping in for the original founders: Bellamy for her father, Lou (for now, they’re serving as co-artistic directors), Rasmussen for Bain Boehlke, Reyes for Rick Shiomi. Haj is the Guthrie’s eighth artistic director, following Joe Dowling, who ran that ship for 20 years.

All had praise for their predecessors; none plans anything too radical, at least for now. In Bellamy’s words, “I have no desire to burn the fields.” Haj echoed, “I have no interest in razing anything to the ground. Theater is passed down. … Our work should dream [the Guthrie] forward.” All acknowledged that their new positions bring great responsibility.

What are they doing as they settle in? Listening, learning, getting to know donors, subscribers, community members and local artists – a talent pool they’ll share, since none has a resident company. And drinking a lot of coffee, according to Haj, who’s been traveling the state.

All four are committed to equity, diversity and social justice. “We’re in a revolution now,” Bellamy said. “Our choices really matter, and whose voices are heard.” Asian-American theater is the new kid on the block; it has only been around for 50 years. “It is our mission to give the Asian-American community a voice,” Reyes said. “A lot of times, we’re invisible.”

When Combs commented, “Not everyone is happy with change,” Rasmussen said bluntly, “It’s not my job to make everyone happy. I feel called to follow my gut and the voices I trust most in the field right now.” Haj senses that at the Guthrie, “the appetite for change is fully there.”

Sustainability and audience-building are shared concerns, with Reyes perhaps facing the biggest challenge. “We don’t get the big corporate donations,” he said, “or the board members who are CEOs. Asian-Americans don’t have philanthropy as part of their core culture. I have to think about marketing and fundraising in a completely different way.”

Mu recently offered a season subscription for $50. “Last season, we had 70 subscribers,” Reyes said. “We sold 240 for this season. We have now engaged 240 people to see plays they haven’t seen before.” Because Asian-American theater is so new, most of Mu’s plays are premieres; Reyes noted, “We’re approaching our 50th.” So are many of Penumbra’s. “In 39 years,” Bellamy said, “we’ve done 34 premieres of work by black artists.”

Although this is a very competitive market – the Iveys’ Twin Cities Theater Calendar lists nearly 80 professional theaters – there’s a shared sense of optimism and collaboration. “It’s a wonderful time for the Twin Cities, and for contributions by theaters of color,” Bellamy said. “I don’t feel alone in this work,” Reyes said. “I’m excited about how we’re holding each other up.”

Rasmussen said, “It blows me away to get to work in such a great theater town. … We get to be part of a moment in history in a town that has shaped [theater] in a big way.”

Haj added, “I’ve been critical of the field for many years – we’re more critical of each other than you [the audience] are of us – but this theater community doesn’t seem as much of a sharpened-elbows, making-space ecology as other places. [It seems more] interested in all boats rising.”

Haj continued, “Theater is even more necessary in our world. We narrowcast our lives … to confirm our own biases. One of the most radical acts we can do is come together, turn off our devices, and sit in a room with someone else’s story.” And not just the same old stories, but new ones, told by different voices.

Twin Cities PBS (TPT) has won a gigantic grant from the Department of Education: $36.7 million to fund a new science and literacy learning series for kids in kindergarten to second grade. It’s the largest single grant in TPT’s 58-year history.

The proposal calls for 40 animated and live-action episodes for broadcast on public television stations across America starting in 2018, along with games, interactive media, educational assets and community outreach.

The grant comes from the DOE’s Ready to Learn program, which supports “the development of educational television and digital media targeted at preschool and early elementary school children and their families. Its general goal is to promote early learning and school readiness, with a particular interest in reaching low-income children.”

The project and proposal were developed by TPT producer Joan Freese, who also works on TPT’s “SciGrls” program, now in its third season.

Wednesday at the Capri Theater: “An Evening With August.” High school students in the Capri After School Theater Program (CAST) present scenes from seven August Wilson plays including “Gem of the Ocean,” “Joe Turner’s Come and Gone,” “Seven Guitars” and “Fences.” Kevin D. West directs. 7 p.m. Free and open to the public.

Wednesday at the Trylon: “Janis: Little Girl Blue.” Both screenings have sold out, but there are usually walk-up tickets available for Trylon shows. Or just wait until this acclaimed rockumentary hits PBS’s “American Masters” sometime next year. Directed by Oscar nominee Amy Berg, Joplin’s story, both triumphant and tragic, is told mostly in her own words, through letters she wrote to her puzzled parents over the years, read here by indie rocker Cat Power. With lots of footage from electrifying live performances, the film also provides many wince-inducing looks into the life of someone who was bullied, hurt and desperate to be loved. 7 and 9:15 p.m. $10. 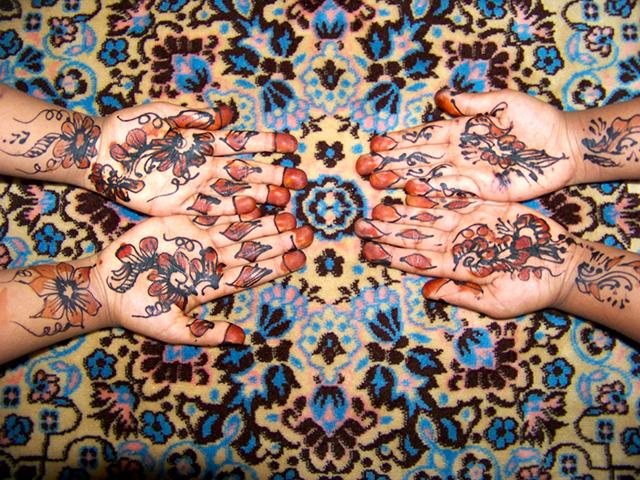 Courtesy of the Landmark Center
“Hands with Henna” by Mohamed Barre

Thursday at Landmark Center: Opening reception for “Through the Lens of Mohamed Barre: Reflections of 25 Years of Somali Diaspora in Minnesota.” Archiving history for future generations, Barre has been documenting the Twin Cities’ Somali community with his camera lens since 2007. In the North Gallery. Reception starts at 5 p.m. and the artist will be present. Through Jan. 16.

Thursday – Sunday at the Lab Theater: The Moving Company: “Liberty Falls, 54321.” Christina Baldwin, Steven Epp, Nathan Keepers and Jennifer Baldwin-Peden – names known to anyone who went to the Theatre de la Jeune Lune pre-Aria – are back with an original operatic comedy in which Epp plays a 105-year-old woman. Dominique Serrand directs. FMI and tickets ($15-$32). 7:30 p.m. all nights, plus a 2 p.m. matinee on Saturday.