Charles Lloyd and his band weren’t going anywhere Wednesday morning – their early flight to Quebec City had been canceled because of the storm — and the Dakota was at near-capacity (um, despite the storm). So they kept playing, nonstop, for well over two hours.

It’s a night people will talk about for years: one where the music was magic, the crowd was rapt, the snow outside kept falling and falling and nobody cared. While signing CDs after, Lloyd mentioned that some people had driven up from Iowa City to see the show.

Tenor saxophonist Lloyd is out with his latest album and his second on Blue Note, “I Long to See You.” His new band is called The Marvels, which is not an overstatement. If you wanted to put together a wondrous band, you might start with Lloyd, jazz legend and elder, then add famed guitarist Bill Frisell, steel guitarist Greg Leisz and Lloyd’s New Quartet regulars Reuben Rogers on electric bass and Eric Harland on drums. No piano; unusual for Lloyd, who usually has Jason Moran or Gerald Clayton at the keys.

Tuesday’s Dakota stop didn’t include Leisz (a frequent Frisell collaborator), so the show was billed as “Charles Lloyd and Friends” and we didn’t get the full Marvels effect. Neither did it include Norah Jones and Willie Nelson, who both make appearances on the album, a Blue Note move that will likely have the desired effect of luring in at least some of the non-jazz crowd.

What we did get was Lloyd’s “Of Course, Of Course” and Bob Dylan’s “Masters of War,” the American classics “Shenandoah” and “Abide with Me,” the Mexican folk song “La Llorona,” Brian Wilson’s “In My Room” and more, all quite possibly in the most beautiful, soulful versions any of us will ever hear. Listening to “Shenandoah” (the source of the album’s title) and “Abide with Me,” we idly wondered — is Frisell, master of Americana, bringing the famously cosmic Lloyd down to earth? 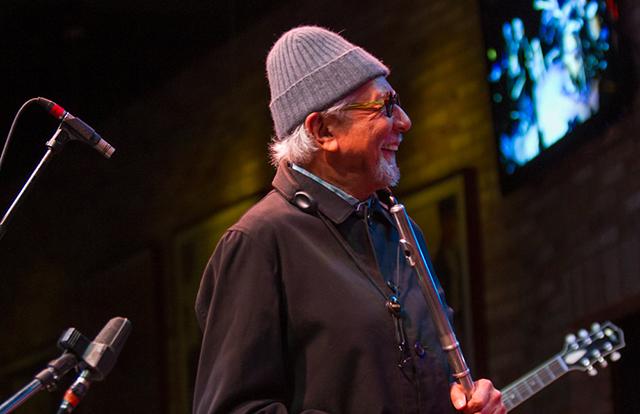 MinnPost photo by John Whiting
It’s a night people will talk about for years: one where the music was magic, the crowd was rapt, the snow outside kept falling and falling and nobody cared.

February is a big month for national jazz acts at the Dakota. Still to come:

Next Monday and Tuesday, Feb. 8-9: The John Scofield & Joe Lovano Quartet. Jazz guitarist Scofield, whose stellar history includes three years with Miles Davis, is touring behind his latest, “Past Present,” a double Grammy nominee. He has reunited his 1990s band: saxophonist Lovano, with Bill Stewart and Larry Grenadier stepping in for Dennis Irwin and Marc Johnson. “Past Present” is all original Scofield compositions, most written when he was dealing with the death of his son, Evan. We’ve been listening and it’s wonderful.

Thursday and Friday, Feb. 11-12: Mack Avenue SuperBand. The Detroit label Mack Avenue is a big name in jazz, and the latest incarnation of its touring ensemble is impressive: bassist Christian McBride, a multiple Grammy winner and host of NPR’s “Jazz Night in America”; vibraphonist and NEA Jazz Master Gary Burton; trumpeter Sean Jones, former member of the Jazz at Lincoln Center Orchestra; the exciting young pianist Christian Sands; powerful young saxophonist Tia Fuller (the rare woman on a horn); and drummer Carl Allen, who has anchored the SuperBand in all its incarnations.

Tuesday and Wednesday, Feb. 16-17: Davell Crawford. The Piano Prince of New Orleans returns for encore performances of the “Tribute to Allen Toussaint” show he brought to the Dakota in January.

Saturday, Feb. 20: Bill Frisell: When You Wish Upon a Star. Frisell twice in one month? How did we get so lucky? He’s back with his own new album of songs from TV and movies – the “Bonanza” theme, music from “Psycho” and “The Godfather,” “Moon River,” “Happy Trails” and the title track. Frisell’s band includes violist Eyvind Kang, bassist Thomas Morgan, drummer Rudy Royston and vocalist Petra Haden, daughter of the late, great bassist Charlie Haden.

Wednesday and Thursday, March 2-3: Brian Blade Fellowship. We’re sliding a bit past February, but it would be a crime not to mention the Dakota debut of the exceptional drummer Blade and his longtime band: pianist John Cowherd, bassist Chris Thomas, reedmen Myron Walden and Melvin Butler. Deeply spiritual, profoundly satisfying music.

The Dakota website has all the deets, including times and ticket prices. Click the links on the music calendar.

Starts tonight (Thursday, Feb. 4) at the Basilica of Saint Mary: 2016 Mental Health Film Festival. As part of its mental health ministry, the Basilica hosts an annual month-long film festival, with post-film discussions. This year’s theme is “Mental Illness and the Arts,” and tonight’s opener is the documentary “Brushes with Life: Art, Artists and Mental Illness.” Feb. 11: Bill Pohlad’s “Love and Mercy” (with Pohlad present); Feb. 18: “Iris”; Feb. 26: “The Soloist.” All films at 6 p.m. Free and open to the public. Here’s Andy Steiner’s article for MinnPost. 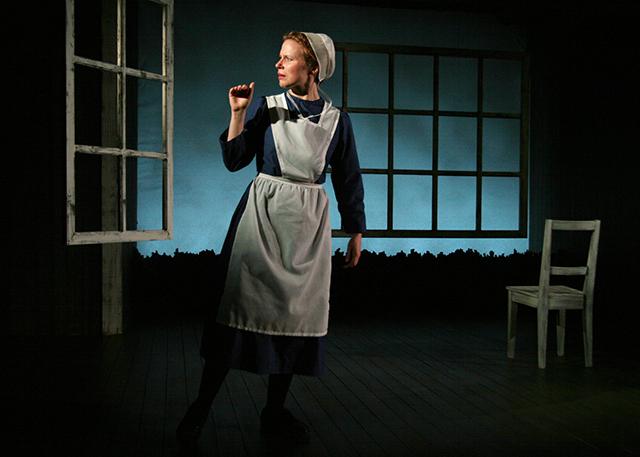 Opens Friday in the Guthrie’s Dowling Studio: “The Amish Project.” Playwright Jessica Dickey plays seven roles in her acclaimed fictional exploration of the 2006 school shootings in the Amish community of Nickel Mines, Pennsylvania. Her solo work is both a glimpse into Amish culture, which is mysterious to most of us, and a new way to look at rage, grief, compassion and forgiveness. Part of the Guthrie’s curated series “Singular Voices/Plural Perspectives,” which began in October with Aaron Davidman’s “Wrestling Jerusalem.” 7:30 p.m. FMI and tickets ($26-$35). Not for children. Ends Feb. 14. 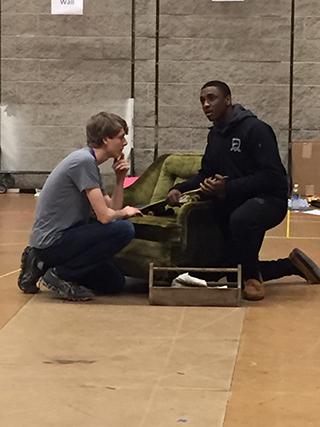 Friday through Sunday at the Lab Theater: “Memory Boy.” Minnesota Opera’s Project Opera, a year-long training program for students in grades 4-12, has turned Will Weaver’s post-apocalyptic YA novel about a suburban Minneapolis family into a fully-staged production. With music by Venezuelan-American composer (and St. Olaf faculty member) Reinaldo Moya and libretto by Mark Campbell (“The Manchurian Candidate,” “The Shining,” “Dinner at Eight”), this is an opera for families. The cast is diverse, and so are the musical styles. Friday and Saturday at 6 and 8 p.m., Sunday at 2 and 4 p.m. FMI and tickets ($15 adults/$5 ages 18 and under). Part of the Opera’s New Works Initiative, Project Opera exposes students to opera repertoire and teaches the basics of acting and a healthy vocal technique.

Saturday at the Fairgrounds: Seventh Annual Beer Dabbler Winter Carnival. Borrowing a story from the Washington Post, the Star Tribune recently posed the question, “Are we drowning in craft beers?” Not yet, but let’s keep trying. This year’s Winter Carnival event features unlimited samples from more than 140 local, regional and national craft breweries, live music, and winter activities. 3:30 – 7:30 p.m. on the Midway and in the Coliseum. And now we’ll turn you over to the Growler, the real experts in all things Dabbler.

Sunday at Intermedia Arts: Rimon Artist Salon: Backstage at the Adoption Play Project. A window into a work-in-progress by two theater leaders. How does adoption – “kinship by design” – affect families, communities and American culture? To write a sensitive and truthful new play on this topic, Alan Berks and Leah Cooper, co-founders of Wonderlust Productions, gathered more than 1,000 first-person stories from hundreds of community members at 25 community story circle events. We’ve talked with Berks about it and seen a very early version. Moderated by Sharon DeMark, the Rimon Artist Salon will feature excerpts from the play and discussion. 2 p.m. FMI and tickets ($12/$6 ages 30 and under).

Charles Lloyd and Friends at the Dakota: The music was magic