It’s been almost a year since we learned that Joe Haj would succeed Joe Dowling as the Guthrie Theater’s artistic director. Ever since, we’ve wondered what his work and decisions would look like, and how the Guthrie would change under his vision and leadership.

With Shakespeare’s “Pericles” — Haj’s first play at the Guthrie, now on the Wurtele Thrust Stage — we finally have the chance to see his directorial hand. Haj has directed “Pericles” twice before, in Oregon and Washington, D.C., to ecstatic reviews (words like “magical,” “beyond-fantastic,” and “stunningly staged” were used), which might make it seem like a safe bet for his Minnesota debut.

“The Oregon Shakespeare Festival stage is a 274-seat thrust configuration, but in a very small room,” Haj said during an interview last week. “The proscenium theater in Washington, D.C., in the Folger is also small; 300 or so seats. And here we are in a 1,100-seat theater. We’ve quadrupled in scale. So while the actors are the same and the costumes are the same and the props are largely the same, the scenery has been redesigned in each of these three spaces.”

The projections — starry skies and stormy seas — had to be rendered differently. The billowing blue sea in which Pericles nearly drowns — a 60-foot piece of China silk — was created and painted here. The actors made major adjustments.

“Putting ‘Pericles’ in this room is a very great challenge for the actors,” Haj said. “In rehearsal, they’re like, ‘My God, I’m still crossing!’ You’re in acreage out there. The actors have been playing in intimate rooms where we can be talking like this” [Haj uses a normal voice] “and doing everything necessary for everyone in the room to hear, understand and feel what we’re doing. In an 1,100-seat room, after the fourth row, this is gone. And you have your back to one-third of the audience all the time. It’s an enormous challenge.”

We spoke with Haj in his office at the Guthrie while snow fell outside the big windows.

MinnPost: You moved to Minnesota from North Carolina seven months ago. Have they been long months or short months?

Joe Haj: In three weeks, it’ll be one year since I was announced here. That feels like a minute ago. The last seven months have flown by, considering that we moved our lives, our house — sold and bought and moved in — and our kids to a new school. It already feels like this is home, like we’re settling in.

The [Guthrie] organization is large and complex enough that I’ve only scratched the surface of beginning to understand it. It’s been a delight to learn the building, learn the community, learn the region, and learn who we want to be in the national/international conversation, let alone the regional/local one.

People have been unfailingly gracious and kind and buoying – genuinely hopeful for our success and my success in this role. We all know it doesn’t have to be like that, and it isn’t always like that, but that’s the sense I’ve had so far, and I don’t take it for granted at all.

[The conversation turns to Joe Dowling and the Guthrie complex.]

JH: Joe did such a splendid job through his tenure. He didn’t only get the building built, he also built a sturdy business model. I’m grateful that it’s not left to me to come in and go, “How are we going to make sense of this place with three rooms and the restaurants and the bars?” He made sense of it.

The great gift of his legacy to me as the next leader is that it has allowed me very quickly to set my eyes to a much further horizon. I’m able to get out of the gate and figure out the art-making and the impact. What do we want to do? Who do we want to include in the making? Who do we want to include as the folks who come and watch it? I could quickly move to those questions without going, “Pump the breaks! We’re bleeding here and we’re in big trouble.” Joe kept this place in superb financial shape.

MP: So you didn’t feel as if you had an immediate problem to solve.

MP: On another side?

JH: The best way I can talk about it is in terms of my own succession at PlayMakers [Repertory Company in North Carolina]. Vivienne Benesch, who succeeded me there, is strong in ways that I wasn’t. She’s able to support some of the things that I instituted, which I’m thrilled and proud of. [There are] other things [on which] I spent nine years working my tail off, and she’s going to take them out back and shoot them. That’s the way it is, and that’s the way it’s supposed to be.

I’m a very different artist, theater-maker, person and thinker than Joe, so invariably there are changes in culture, changes in aesthetics, changes in who participates in the making of the work. Those changes are challenges to an organization.

[The Guthrie] was built around Joe’s leadership for the past two decades. So I’ve remade the senior team. I’ve created new positions and new roles, and in most places, put new people in them. There has been a lot of change at the top of the organization in a way that I think best serves the Guthrie and my own leadership approach and priorities.

I think that’s a very good and healthy thing, and on the day that I leave the Guthrie, whenever that day may come, the next person is going to come in and do exactly the same thing.

[Haj praises his new hires: David Stewart, director of production; Jeffrey Meanza, associate artistic director; and Jennifer Bielstein, managing director. We note that they all left much warmer places to follow him here.]

JH: To be called to serve at the Guthrie is the phone call that many of us dream of in our careers. From the moment of its birth, it was an enormously important theater in this country and it remains so. For each of these jobs, there were extraordinary candidates to choose between, and I’m really excited about the team we have.

MP: People have wondered how the 2015-16 season took shape—how much was yours and how much was Joe Dowling’s. I’ve heard that most of the plays were in place, but you had the option to change the ones you didn’t want.

He said, “You need to be able to stand over this season, Joe. I can’t have two last seasons. You need to tell me what else you want in this season.” And of course I said, “What works well here, Joe?”

He also said, “If any of the plays that are in place are ones that you hate, you should say so, and we’ll figure something else out.” That said, some of them, especially ones at the front of the season, were pretty far along. “Mockingbird” was already in the design process. If I had said, “We’re not doing ‘Mockingbird,’ ” I’m sure he would have figured out how to unravel that, but these pipelines are long, and some of these things were pretty far down them. So I didn’t change any of the things that were already there.

“Pericles” obviously has my print on it, and that’s what I wanted to do there. “South Pacific” [opening June 18] was already in the season, but I put myself on it as director. “The Critic/The Real Inspector Hound” [opening Feb. 23] is a coproduction with the Shakespeare Theatre Company in Washington, D.C., that Michael Kahn is directing. Joe Dowling and Michael Kahn dreamed that up and we’re excited to bring it in. That was in the pipeline forever, way before me. 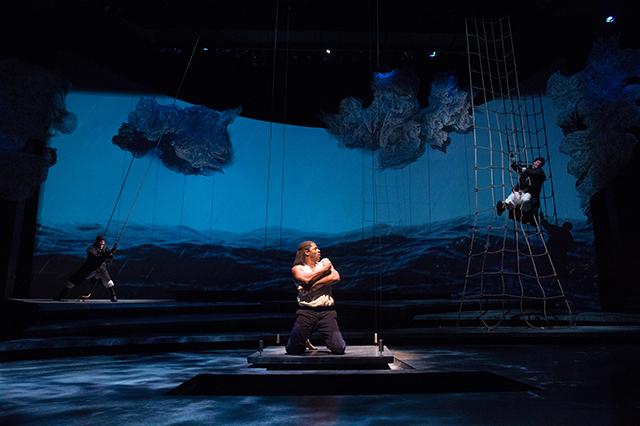 So, much of the season was in place, but there were a lot of gaps that I worked with Joe to put plays in.

JH: “Trouble in Mind” [opening May 7] we did last year. “Disgraced” [July 16] was programmed there for this year, but they did something else.

JH: When we were thinking about that slot, genre-wise, thematically, we were like, “What about a classic American comedy?” As I looked across the season, there weren’t as many women writers as I would’ve loved to see. “Harvey” is written by Mary Chase. It’s one of the small handful of classic American comedies written by a woman, and she won the Pulitzer Prize for it.

A play that satisfies in an uncomplicated way, allows people to have a nice time at the theater and go home, is a perfectly fine piece of programming, too. It shouldn’t be all that we’re doing, any more than we should only be making the most bone-hard, provocative, challenging thing. But if we’re doing our job right, we should be stretching the sine wave between kinds of plays across the year.

That’s where I get excited about a season: not because it has a whole lot of any one thing, but because it offers a journey of a kind. That’s how we think about it.

MP: Are you considering doing a new play festival along the Humana lines?

JH: I’m not saying that we wouldn’t do it, but if you’re asking what’s forward in my mind, no, not a festival. But what is very much on my mind is that the Guthrie must participate in the new play game somehow, and I’m trying to think of where we could be of unique value.

MP: Have you started framing a response?

JH: Yes. Nothing I’m prepared to speak about narrowly, but I think even as soon as 2016-2017 we’ll see an idea about an approach to new plays, and I’ll be commissioning new plays here at the Guthrie.

There are real challenges here. This is one of the world’s great theater facilities, [but] it doesn’t quite have a new play space. The 200-seat [Dowling Studio] room is so small. And then you move to scale so quickly on the 700-seat proscenium and an 1,100-seat thrust. A new play by an unknown playwright in one of those rooms? Not impossible, but super challenging. You could do no greater disservice to a playwright than say “Write a play,” then put it in a room and nine people come. Nothing good happens there. I think very hard about that.

“Pericles” continues through Feb. 21 on the Wurtele Thrust Stage. FMI and tickets. On Tuesday, Feb. 9, the Guthrie will host a public event to introduce Haj to the community. “Meet Joseph Haj” will feature brief remarks by Haj followed by a Q&A with the audience. Tickets are free, but reservations are required. 5:30 – 6:30 p.m. on the McGuire Proscenium Stage. Go here or call 612-377-2224.