For its 35th anniversary, the Minneapolis St. Paul International Film Festival (MSPIFF) will expand its footprint and broaden its scope. Keeping its home base at St. Anthony Main Theatre, the festival will take over the Uptown Theatre for a full week and touch down often at Metro State University in St. Paul, which has a newly refurbished auditorium.

As usual with MSPIFF, one of the nation’s longest-running film festivals and our largest spring arts event, we’ll be able to choose from more than 200 films from over 70 countries. Last year’s festival drew a record-breaking 41,274 attendees.

The festival is always looking for ways to connect with new audiences. The “Cine Global” program, launched in 2015, reached out to Minnesota’s growing international communities.  This year brings “Spotlight on the World, inFLUX,” a selection of films that looks at the journeys of immigrants and refugees.

Other additions include a series of experimental shorts curated with Cellular Cinema and an extended youth program presented with Twin Cities Youth Media Network and Intermedia Arts.

MSPIFF takes place April 7-23. The complete line-up of films and special events will be announced in early March. Festival passes and 6-packs are on sale now. Individual ticket sales begin March 17 for Film Society members, March 24 for the public.

Minnesota Citizens for the Arts has a sleek new website, including a sweeter, much shorter URL. The former mncitizensforthearts.org is now artsmn.org. The site is colorful, easy to navigate and looks good on a smartphone. You can go there now if you want to learn more about and register for Arts Advocacy Day 2016, which happens March 17.

As part of its 50th anniversary, the National Endowment for the Arts is producing a monthly series of videos focused on some of the artists and organizations it has supported over the years and their impact on U.S. culture. This month’s topic: the Walker Arts Center. Take a break and take a look. The Walker has received support from the NEA since 1968.

For you poets out there: Submissions are open for the 2016 Lindquist & Vennum Prize for Poetry, a premium award with a $10,000 purse and a publishing contract with Milkweed Editions. Previous winners of this still-young prize are Jennifer Willoughby, Michael Bazzett, Rebecca Dunham and Patricia Kirkpatrick. This year’s judge is Van Jordan, author of four collections of poems, winner of the 2015 Lannan Literary Award for Poetry (among other honors) and professor at Rutgers University. The competition is open to poets currently residing in Minnesota, North Dakota, South Dakota, Iowa and Wisconsin. Manuscripts must be complete, previously unpublished book-length collections. There is no entry fee. Guidelines here. Postmark deadline March 1.

We’re sad to report that TWISP — the weekly newsletter about arts and culture events in St. Paul, written by Clarence White and published by the Saint Paul Almanac – is no more. For two years, “This Week in Saint Paul” (its official name) was a reliable source of where-to-go, what-to-do information, well-curated and thoughtfully composed. We looked forward to reading it and trusted it implicitly.

In the final TWISP, published Dec. 28, White wrote, “As easy as it looks, it also takes much support and money to keep it going. It is not a spare time undertaking, and we have not been able to find that support.” That’s too bad. You’d think the city of St. Paul might be interested in keeping this alive. And btw, Clarence, it never looked easy. 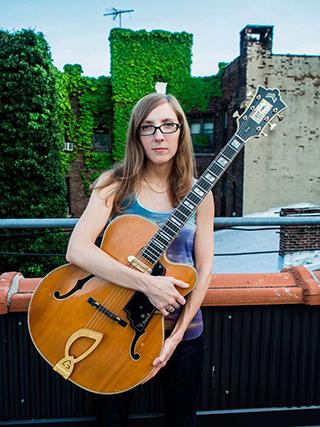 Tonight (Wednesday, Feb. 10) at the American Swedish Institute: “Hotell.” Oscar nominee Alicia Vikander (“The Danish Girl”) stars in Lisa Langseth’s film about a support group of people who want to start over. Part of ASI’s 2016 Winter Film Series, which features the work of three Swedish women directors. In Swedish with English subtitles. 7 p.m. Free, but seating is limited and registration is recommended. FMI, trailer and registration.

Thursday at the Walker: Mary Halvorson. Famed in NYC avant-garde and improvisational music circles, Halvorson has appeared on more than 70 albums. She’s known mostly as a jazz musician, but she performs in a wide range of styles. She’ll be at the Walker as part of its Sound Horizon series of free performances, playing in the galleries on Target Free Thursday Night. Every guitar player without a gig had better be there. 6, 7 and 8 p.m. Free. 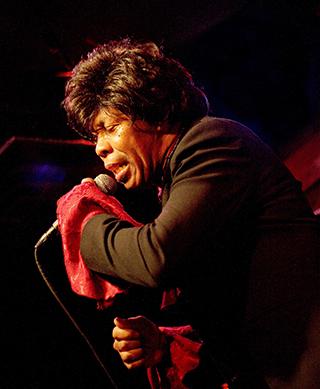 Courtesy of the Parkway
Ty Stone as James Brown

Saturday at the Parkway: Ty Stone’s James Brown Experience. This could be the most fun in the Twin Cities all weekend. Backed by a 12-piece band and go-go dancers, Stone, a Bloomington factory worker, channels the Godfather of Soul. “Most James Brown tributes are just someone singing James Brown songs,” Stone says. “When you see Ty Stone’s James Brown Experience – BAM! – you get a soul overload all in your face.” In case you’ve seen him before, Stone promises more stage time, a new slew of hits and costume changes. Doors at 7 p.m., show at 8. The Stone Soul Orchestra opens. Tickets here ($22 general seating/$30 VIP).

Friday and Saturday at Patrick’s Cabaret: My Horrifying Love Life! Were Tuesday’s V-Day picks too sweet for you? Here’s an evening about the darker side of love – embarrassing events and misunderstandings that happened far enough in the past that the artists can laugh about them. Curated and hosted by the Cabaret’s new executive artistic director, Scott Artley, with stand-up comic and LGBTQ activist Sarah McPeck, Hector Chavarria (the Big Gay Mexican), Cassandra Snow & Company (presenting “Go Home, Aphrodite, You’re Drunk,” about the foibles of dating while marginalized), queer writer and performer Mandee Driggers, burlesque dancer Marcel Michelle and funny person Amanda Jacobson. 7:30 p.m. $10 at the door (sliding scale $5-$15 available).

Friday at Plymouth Congregational Church: Dr. Vasudha Narayanan. Ragamala Dance has partnered with Plymouth’s Literary Witnesses program to host Vedic scholar Narayanan, who will speak on the Alwars, the Tamil poet-saints of South India, whose poetry is filled with passion and love for the Hindu deity Vishnu. Narayanan consulted with Ragamala on the poetry for “Written in Water,” a forthcoming work by the company. So this event is good background and insight for the future. 7 p.m. Free.

Flowers and showers seem impossibly far away, but two April events (along with MSPIFF) already stand out.

1. Watching Hitchcock films on a big screen in a neighborhood theater is way better than watching them at home on your teevee or computer. Starting Thursday, April 14, the Trylon Microcinema will host a Minneapolis Hitchcock Festival – not in its own amazing but tiny room, but at the retro Heights and Riverview. Here’s the schedule and you can buy tickets now ($8-$10) and get that out of the way.

2. Children’s author and two-time Newbery medalist Kate DiCamillo is every bit as charming, warm and funny in person as she is on the pages of her books. On Saturday, April 30, she’ll kick off Independent Bookstore Day at Common Good Books by signing copies of her latest, “Raymie Nightingale,” starting at 10 a.m. A $20 ticket (available only at Common Good) includes a copy of the book and gets you in the door by 9 a.m. for a reading, informal conversation and Q&A with DiCamillo, plus coffee and pastries.