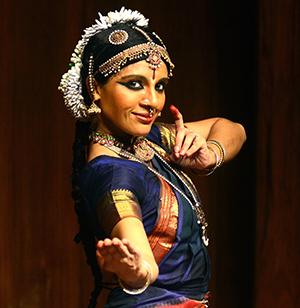 For thousands of years, Indian women have risen at dawn to create intricate designs called kolams from rice flour on their doorstep. “They Rose at Dawn,” the new solo work by Aparna Ramaswamy that comes to the Cowles on Friday and Saturday, honors women as carriers of ritual and culture, wisdom, reverence and imagination.

As she dances, none of these things, heavy as they are, seems like a burden. They seem like wings.

“They Rose at Dawn,” an evening-length work in four parts, had its premiere in October at the Joyce Theater in New York, where the Times previewed it by calling Aparna “a vision of sculptural lucidity.” From there it went to NYU Abu Dhabi. This weekend’s performances are a homecoming. Aparna and Ragamala Dance, the company she founded with her mother, Ranee Ramaswamy, are based in Minneapolis.

Ragamala’s dance language is Bharatanatyam, a complex and demanding South Indian form that dates back 2,000 years. Every movement and gesture, from stamped foot to raised eyebrow, curled finger to sideways glance, has import. But that doesn’t mean the form is rigid or irrelevant. Aparna, who has been studying and practicing Bharatanatyam since she was 5 years old, is a first-generation Indian-American who choreographs and dances with her own original ideas. She performs in traditional costume to live Indian classical music, but her dances are new.

We watched a rehearsal last Saturday and spoke with her afterward.

“Just because something has a history doesn’t make it not living,” she said. “It doesn’t make it not worthy. Bharatanatyam … has its origins in mythological times, but it has gone through numerous changes. It has lived through each generation of its practitioners, who have done it and revived it, moved its location, changed its themes and created new songs. There are different schools within the tradition, so it’s evolving through each artist.

“The pieces [in ‘They Rose at Dawn’] are newly choreographed. I’m a contemporary woman living here in America, and I created them. I’m drawing in the historical, the mythological, the spiritual, and the emotional, but I’m exploring themes that people will understand today.” 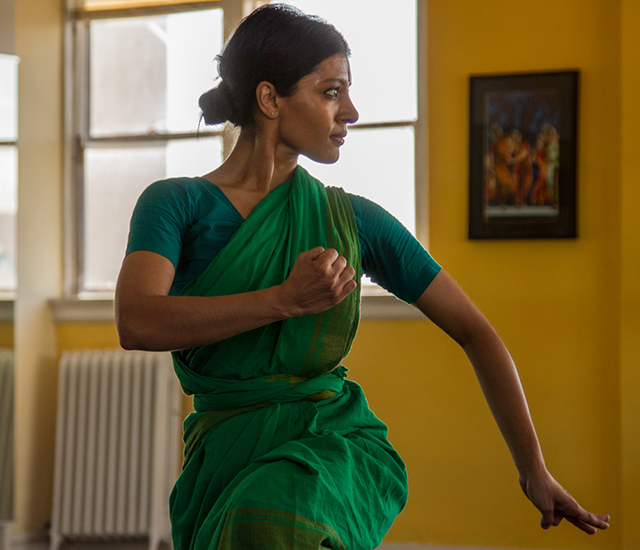 Some of those themes are love and devotion, family, ferocity, the soul’s yearning for union with the divine, the struggle for freedom, our interdependence with nature. As she dances, Aparna is goddess and mother, lover, avenger, worshipper. She’s a wife whose husband is off at war. Flowers bloom in her hands as her bare feet pound in percussive rhythms punctuated by bells on her ankles.

Even with just one dancer, it’s a lot to watch and take in. Because Bharatanatyam is rooted in another culture, it can seem foreign and mysterious. Especially if you’re seeing it for the first time, it’s easy to get sidetracked by your own mental chatter. What does that movement mean? What’s going on with the music? Where’s the narrative? What am I supposed to get from this? We asked Aparna what she would say to invite someone in. (We speak from experience btw. Our first Ragamala dance event several years back left us baffled. But it was so beautiful and compelling and enticing that we went back for more.)

“What I would say is they don’t have to understand everything,” Aparna said. “People try so hard to intellectualize what they’re seeing. They feel that if they understand all of the gestures, they’ve got it.

“But they don’t have to understand all of the gestures. If they just let that go, and they’re comfortable with the idea of being slightly uncomfortable – that it’s a mystery, that we are painting a picture and creating a universe – they can lean in and just be part of it, and trust their feelings and instincts.

What about narrative? “The piece is in four sections, and it portrays different facets of us as humans. My strong feeling is that people shouldn’t expect or want a linear narrative. I don’t find that very interesting. To me, the subtext is much more interesting. What is the emotional component? That is the build.”

Knowing that some of us could use a little extra help, “They Rose at Dawn” includes brief recorded descriptions before the second and third parts. The program notes explain that the first part is about the goddess Devi, the second is a love poem, the third is based on two ancient haiku-like poems and the fourth is a celebration of life. Aparna often dances to poetry – not to their literal words or rhythms, but their meanings and emotional tones.

During the performance, the musicians – Ranee on nattuvangam (cymbals), Vinod Krishnan on vocals, Rajna Swaminathan on mridangam (two-sided hand drum) and her sister Anjna Swaminathan on violin – will be seated on the floor at one side of the stage, where they can clearly see Aparna (and we can see them). The performance lasts about 70 minutes, something else that makes it modern. In the Bharatanatyam tradition, “solo dances are usually a lot longer,” Aparna said. “An hour and a half or two hours. You go on the journey, your musicians are with you, the audience is with you, and you live all of these lives.” 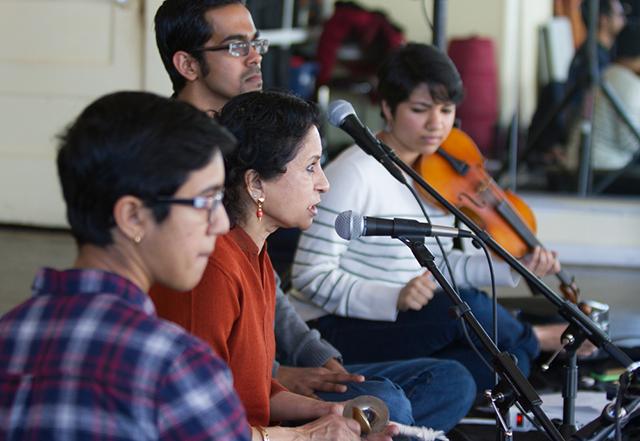 Now at the Ordway: “A Chorus Line.” The Ordway’s own production of the smash hit Broadway musical stars a mix of local and Broadway dancers. Co-directed and choreographed by the Ordway’s James Rocco and Kerry Casserly, artistic director of the Lundstrum Center for the Performing Arts and cast member of the 1970s Broadway production. Sensational songs and dazzling dance. FMI and tickets ($30-$131). Ends Feb. 28.

Tonight (Wednesday, Feb. 17) at Northrop: “The Triplets of Belleville” with Live Music. Northrop is calling this a “cine-concert,” a compact way to say that Canadian composer Benoit Charest, who wrote the soundtrack for French director Sylvain Chomet’s 2004 animated film, which received two Oscar nominations including Best Song, will be here with his eight-piece Le Terrible Orchestra de Belleville, performing the score and the sound effects live on stage. Which is something you won’t see or hear every day, or perhaps ever again. 7:30 p.m. FMI and tickets ($25-$35). U of M students get in free. 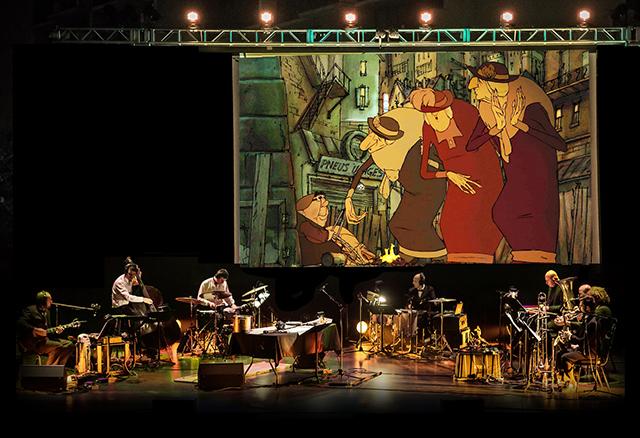 Courtesy of the Northrop
“The Triplets of Belleville”

Tomorrow at the U’s Elmer L. Andersen Library: “Bringing Black History Out of the Shadows.” Since early November, artists Erin Sharkey and Junauda Petrus, co-founders of the collective Free Black Dirt, have been exploring the archives of the Givens Collection of African American Literature as artists-in-residence with Coffee House Press’s In the Stacks program. They were among the first users of Umbra: Search African American History. Sharkey and Petrus will recap their findings and learnings, then take part in a panel discussion featuring Givens Collection curator Cecily Marcus, Givens Foundation executive director Tana Hargest and Jay Peterson of Coffee House Press. 7 p.m. in room 120. Free and open to the public.

Sunday at Orchestra Hall: VocalEssence WITNESS concert with Morehouse College Glee Club. Now in its 27th year, VocalEssence’s WITNESS program has featured the contributions of African Americans and given students opportunities to learn and perform. This year, the Morehouse College Glee Club, led by Dr. David E. Morrow, celebrates the male voice. The internationally renowned Morehouse will perform alongside the newly formed 200-voice High School Male Chorus made up of students from Minneapolis and St. Paul high schools, with whom Morrow worked in a series of visits. The program includes classical favorites and the Morehouse College Glee Club anthem, “Betelehemu.” This will be great. 7 p.m. FMI and tickets ($10-$40).

Solo dance work ‘They Rose at Dawn’ coming to the Cowles; ‘A Chorus Line’ at the Ordway