One thing seems certain about Chris Thile’s upcoming job as host of “A Prairie Home Companion”: More songs will be written about St. Paul. Thile said as much on Saturday during his first solo flight with the show, for which he was billed guest host. “The idea is trying to write a new one for every one of these,” he announced before launching into “The Mississippi Is Frozen,” a pretty good tune.

About other things, we can venture guesses. The Punch Brothers, or some of the Punch Brothers, will be regulars. (And/or members of Thile’s other band, Nickel Creek. Or maybe both?) Fewer stories will be told, and they will be delivered by guests. APHC overall will be less talk, more music. And there will someday be Chris Thile-related, APHC-specific merch (like an album of St. Paul songs).

Thile (THEE-lee), who’s used to playing for crowds, if not for APHC’s 4 million weekly radio listeners, appeared comfortable in the Fitzgerald Theatre, where we spotted St. Paul Mayor Chris Coleman and a lot of beards. Some things are still strange to him, including the clock beside his monitor (not visible to the audience) “where time is running out. It seems kind of ominous.” (APHC is a show that starts and ends precisely on time. Toward the end, during the final song, we could see him gesturing “Wrap this up!”)

And there’s the daunting prospect of stepping into Garrison Keillor’s shoes. More than once during the two-hour broadcast, which also streamed live on the website, Keillor’s name came up. “I’m delighted to be here,” Thile said. “I believe Garrison Keillor is writing a book right now.” And “I’m so grateful to him for this opportunity.” Tim Russell – part of the show’s acting company, with Sue Scott and sound effects wizard Fred Newman – made reference to the “tall, shambling galoot.” Keillor will continue as executive producer when Thile takes over as host next season.

We’ve only seen Thile live once before (at the Walker with pianist Brad Mehldau in 2014), so we don’t know if he’s usually a talker on stage, but he seemed perfectly fine introducing and interacting with the regulars and guests, taking part in skits and making jokes.

He followed a crack about Donald Trump (“The only way to slow him down is by increasing the education budget”) with a personal anecdote (“I’m a musician. I was home schooled. By that, I mean playing the mandolin and reading Hardy Boys novels”). He gave us some background on the Bill Monroe tune “Footprints in the Snow” before performing it, then chatted briefly with the Punch Bros. before they all played a breathtaking arrangement of the fourth movement from Mozart’s 14th string quartet. He took the lead in a skit about snow emergencies with Russell, Scott and Newman that required him to say, straight-faced, “Why would I ever put my tongue on an iron railing?”

It was kind of weird seeing Thile do the Powdermilk Biscuit and Catchup and Beebopareebop Rhubarb Pie bits. He can do them with no problem, but it made us wonder how much of the original format is there now to ease the transition, and how much will still be around by 2017.

For many listeners, the heart of APHC has been Keillor’s weekly “News From Lake Wobegon” monologue. No one but Keillor could ever do those, and it would be dumb to try. On Saturday, guest Ed Helms (“The Daily Show”) told a story about stalking and catching a cricket in his home. Maybe story duties will fall to the guest comedian. Let’s see if Maria Bamford takes it on during next Saturday’s show. (Keillor returns Feb. 13.) 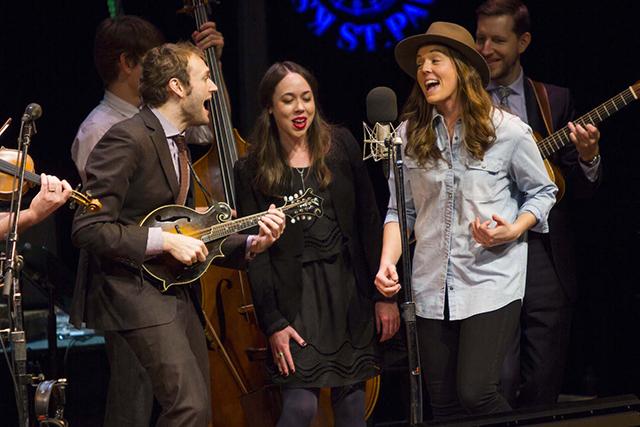 The music throughout was terrific: Monroe’s “Footprints” with contemporary bluegrass prodigy Sarah Jarosz; clever, catchy songs by indie-pop star Ben Folds; that marvelous Mozart; Brandi Carlile’s tear-jerking “Red Dirt Girl,” and her yodeling during “Lovesick Blues.” The Punch Brothers and Carlile’s singers Phil and Tim Hanseroth. Longtime regular Rich Dworsky held it all together at the piano, and the abundance of strings on stage – guitars, banjo, mandolin, bass – was a genuine pleasure. If Thile returns APHC to its roots as a musical variety show – something Keillor told the Atlantic he expected him to do – then bringing in top-notch, amiable guests is the way.

You can listen online to the whole show or segments. Next week’s guests include Paul Simon and Andrew Bird; it sold out soon after it was announced, but you can stream it live during the broadcast or listen later online.

The 32 finalists for this year’s Minnesota Book Awards were announced Saturday. There are eight categories and four books in each, chosen by 24 judges from around the state including writers, teachers, librarians, booksellers and others from the literary community.

For Children’s Literature: “Behold! A Baby” by Stephanie Watson, illustrated by Joy Ang; “Dad’s First Day” by Mike Wohnoutka; “Red: A Crayon’s Story” by Michael Hall; and “Ten Pigs” by Derek Anderson. For General Nonfiction: “Asking For It: The Alarming Rise of Rape Culture – and What We Can Do About It” by Kate Harding; “John H. Howe, Architect: From Taliesin Apprentice to Master of Organic Design” by Jane King Hession and Tim Quigley; “No House to Call My Home: Love, Family, and Other Transgressions” by Ryan Berg; “Secrets from the Eating Lab: The Science of Weight Loss, the Myth of Willpower, and Why You Should Never Diet Again” by Traci Mann.

For Genre Fiction: “The Devereaux Decision” by Steve McEllistrem; “The Grave Soul” by Ellen Hart; “He’s Either Dead or in St. Paul” by D.B. Moon; “Season of Fear” by Brian Freeman. For Memoir & Creative Nonfiction: “In Winter’s Kitchen” by Beth Dooley; “The War Came Home with Him: A Daughter’s Memoir” by Catherine Madison; “Water and What We Know: Following the Roots of a Northern Life” by Karen Babine; “We Know How This Ends: Living While Dying” by Bruce Kramer with Cathy Wurzer.

For the Minnesota category: “Minnesota Modern: Architecture and Life at Midcentury” by Larry Millett, photographs by Denes Saari and Maria Forrai Saari; “Minesota State of Wonders” by Brian Peterson, stories by Kerri Westenberg; “North Shore: A Natural History of Minnesota’s Superior Coast” by Chel Anderson and Adelheid Fischer; “Warrior Nation: A History of the Red Lake Ojibwe,” by Anton Treuer. For Novel & Short Story: “The Dead Lands” by Benjamin Percy; “The Patron Saint of Lost Comfort Lake” by Rachel Coyne; “Prudence” by David Treuer; “There’s Something I Want You to Do” by Charles Baxter.

Of the 32 books in the running, 14 were published by Minnesota publishers, and seven of those by the University of Minnesota Press.

The awards ceremony will be held Saturday, April 16, at Union Depot. FMI and tickets ($50/$500 for a table of ten). Several readings and events will be scheduled before the awards, giving us plenty of chances to see, hear and meet the finalists. We’ll let you know about those.