Abstract dance, which includes much contemporary dance, is not about narrative. It’s about movement and expression, and if you try to find a plot you’ll be frustrated because there isn’t one. But sometimes you want dance to tell you a story, preferably one with a beginning, middle and end, lots of juicy action and maybe a broken heart or two. If that’s what you’re in the mood for, get thee to the Ritz, where four performances remain of Collide Theatrical Dance Company’s “Dracula.”

And what a bloody good romp it is. Ten dancers, two singers and a live band fill the space with sound, flying feet and furious action, which spills off the stage and into the aisles. Director Joshua Campbell takes Bram Stoker’s horror classic, moves it forward into modern times (some dancers have smartphones) and sets it to a pop music soundtrack, with songs by Nirvana, Queen, Lady Gaga, the Police, Cheap Trick and more.

Choreographed by Collide’s artistic director Regina Peloso, who doubles as Renfield (an inmate at a lunatic asylum), “Dracula” tells its story in dance, music and song lyrics; dialogue isn’t needed. The only character who doesn’t dance is the Count, played by Michael Hanna, who is also the only character who sings. His powerful voice echoes Freddie Mercury, especially in the Queen hit “Somebody to Love.”

This original Collide production must have been fun to put together. Songs like “Human,” “Bad Girls,” “I Want You to Want Me,” “Save Your Soul,” “Feels Like the End” and “Blood in My Eyes” seem destined for a date with Dracula. The lyrics to Radiohead’s “Creep” (“I’m a creep, I’m a weirdo/I don’t belong here”) are perfect for an interpretation where Dracula is an outsider trying to fit in with the cool kids and failing because, you know, he’s a vampire. Eventually he’s going to bite someone.

Fast-paced and enormously entertaining, the full-length jazz dance musical (with one intermission) also features Katie Gearty, another powerful singer whose minor-key take on “My Favorite Things” will chill your blood. Jami Snively is Lucy, the doomed bride of Arthur Holmwood, danced by Kevin Iverson; Renee Guittar is Mina Murray, the object of Dracula’s desire and wife to Jonathan Harker, danced by Tony Vierling. Peluso’s choreography is dazzling. It’s exciting to see a large group of energetic, athletic dancers, in step and tossing each other around. We couldn’t take our eyes off of Riley Thomas Weber, the tall one who dances Dr. Seward in scenes with Peluso as a fierce, manic Renfield.

Side note: Campbell and Hanna are both busy guys. Campbell just finished directing “Doubt” at Artistry and is assistant directing “Diary of a Wimpy Kid” at the Children’s Theatre. In May and June he’ll direct “Urinetown” at DalekoArts in New Prague. Hanna was most recently “Romeo” in Park Square’s “Romeo and Juliet.” He’ll go from “Dracula” to “Bad Jews” at the Minnesota Jewish Theatre, which opens April 30. We still remember him as Moth in Workhaus Collective’s “The Reagan Years.”

In case you’ve been in a cave and haven’t heard: The Walker will hold no more Internet Cat Video Festivals. What began as a lark in 2012 and became a pop culture phenom will now be an archive at the Minnesota Historical Society, where the Walker is sending photos, planning documents, promo materials and ephemera for scholars and future generations to pore through and purr over. We get that the Walker has bigger fish to fry, including the ongoing renovation of its campus and the Sculpture Garden, but we’re still kind of Grumpy Cat to see the festival go.

Worth seeing: Everyone knows that the Egyptians mummified their dead – but the Peruvians? Thousands of years earlier? That’s one of many surprises in “Mummies: New Secrets from the Tombs,” now at the Science Museum. Developed by Chicago’s Field Museum, this absorbing and enlightening exhibition features nearly 20 mummies from Egypt and South America – preserved, wrapped and encased men, women and children who lived inconceivable ages ago, behind glass, labeled “Human Remains” and viewable up close. In some cases, even closer: images from non-invasive CT scans take you inside to the organs (when there are any) and bones.

The Egyptians are the main draw, with their richly decorated coffins, stone sarcophagi and gilded masks, and the hyper-realistic facial re-creations of a woman and teenage boy, but don’t pass by the Peruvians in their humble linen bundles tied with rope. One holds a woman and her two children. It’s interesting to learn that while the Egyptians sealed their tombs to protect them from grave robbers, the ancient Peruvians kept theirs open so they could visit their dead, bringing them food and beer. 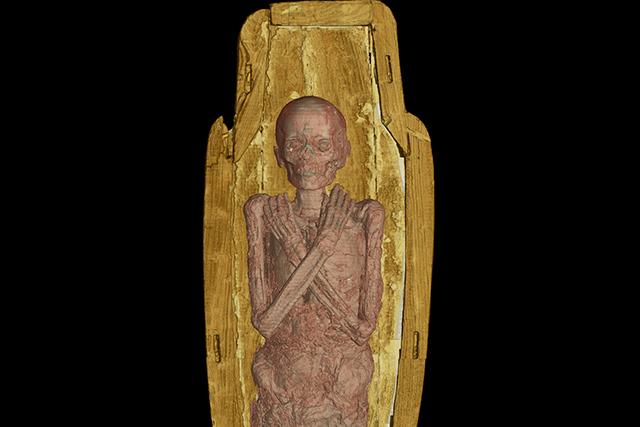 Courtesy of the Science Museum of Minnesota
An image from “Mummies: New Secrets from the Tombs”

We were there on a busy Saturday afternoon – peak time at the museum – when people crowded in front of the dimly lit cases, kids played with the hands-on exhibits and babies in strollers cried, but occasionally someone stood very still before a bundle, coffin or linen-wrapped body. As amazing as the science is, as beautiful as the hieroglyphics and carvings are, this is the land of the dead. Closes Sept. 5. FMI and tickets ($24/$12 plus museum admission). Tickets are timed.

Tonight (Tuesday, March 15) at LynLake Brewery: MNMO Conversations on Tap: Gut Feeling: How the Microbiome Affects Everything About You. It’s one thing to know that we humans are about 60% water, another to realize that our mushy selves contain about 10 times as many bacteria cells as human cells. Who are these little invaders, and how do they affect our digestion, our immunity and our moods? Minnesota Monthly senior editor Quinton Skinner leads a panel of experts in a discussion fortified with beer and apps. 5:30 – 7 p.m. 21+. Discussion at 6. FMI and tickets ($5).

Tonight at the Bryant-Lake Bowl: Café Scientifique: The Physics of Confections. Oh, no! Two science and culture social events on the same night! You’ll just have to decide which you want to know more about, gluten sensitivity (that would be Gut Feeling above) or cotton candy (Confections). Dr. Ted Labuza from the U’s Department of Food Science & Nutrition talks the science behind some of our favorite sweets. We’re guessing he’ll cover why cotton candy melts in the mouth, and why soft cookies stay soft. Doors at 6, event at 7. FMI and tickets ($5-$12).

Tonight at the University Club of St. Paul: Carol Connolly’s Reading by Writers. In honor of St. Patty’s Day, we’ll hear artists of Irish descent: T.K. O’Rourke, Karle Oberg, Tom Dunne, Ethna McKiernan, Daniel McGleno, Tom Jeffers, Siobhan Kierans and MPR reporter Euan Kerr, who we were pretty sure was entirely Scottish but turns out to be one-quarter Irish. 7:30 p.m. Free and open to the public; a hat will be passed in support of the Saint Paul Almanac.

Thursday at the Walker: “Containment.” Starting now, ending just before the 2016 election, the Walker is hosting a series of free film screenings and conversations about important topics of our time. Thursday’s film, “Containment,” spotlights the dangers of waste disposal sites including Japan’s Fukushima Prefecture, which was never meant to become a repository for nuclear waste but tragically became one. The post-screening discussion with directors Peter Galison and Robb Moss will be moderated by Christine Marran, associate professor of Japanese literature and cultural studies at the U. 7 p.m. Free. FMI. Tickets available at the Hennepin Box Office starting at 6.

Friday and Saturday at the Guthrie: Taylor Mac’s 24-Decade History of Popular Music: The 20th Century Abridged. “Fabulousness can come in many forms,” said the New York Times, “and Taylor Mac seems intent on assuming each and every one of them.” Part concert, part drag show, this performance is part of a curated series the Guthrie’s new artistic director, Joe Haj, has planned to spark community dialogue. Both nights will be followed by a conversation between Mac and Haj in the theater. Mac is an internationally acclaimed theater artist – a playwright, actor, singer-songwriter, cabaret performer, performance artist, director and producer – who uses “judy” as a gender pronoun. Strong language, mature subject matter. 7:30 p.m. FMI and tickets ($25-$45). Two nights only; Mac is touring. Here’s a video.