If you like Chris Thile, who’ll succeed Garrison Keillor as host of “A Prairie Home Companion” in September (and to be honest, who doesn’t like Chris Thile?), you’ll love Avi Avital, who’ll perform next Tuesday (March 8) at Aria.

Besides being mandolin virtuosos, the two have other things in common. Both started playing as children – Thile at age 5, Avital at age 8. Both have recorded albums of music by Bach, although Thile plays mostly bluegrass and Avital is a mostly classical artist. Thile has won several Grammys and nominations; Avital has a single Grammy nomination (so far). Both are in their 30s, charismatic and engaging, with profound musical depth.

Avital’s performance is part of the Schubert Club Mix series, which takes the formality out of classical music by putting it in places like Aria, the Bedlam and the Hill Center. We’re lucky to see Avital at Aria because he usually plays much larger venues and events, including Carnegie Hall, London’s Wigmore Hall, Lincoln Center, the Forbidden City Concert Hall in Beijing, and the Aspen, Tanglewood and Berlin festivals. He performs with orchestras like Zurich’s Tonhalle, the Israel Philharmonic, and the Atlanta Symphony. He’s widely regarded as one of the world’s leading classical mandolinists.

Born in Be’er Sheva in southern Israel, Avital learned from two important teachers. The first was Russian-born violinist Simcha Nathanson, who led a mandolin youth orchestra in the city. “He taught us violin through the mandolin,” Avital said. “It forced us to step up our game and deal with much more complex repertoire.” Later he spent eight years in Padova, Italy, studying the original mandolin repertoire with the internationally known Ugo Orlandi.

Not a lot of music has been written specifically for mandolin, and Avital is changing that. Along with making his own arrangements of pieces written for other instruments, he actively supports the creation of new work. “This is my ongoing mission,” he said, his passion coming through the phone. “There is a gap in the history of music when composers didn’t write music for the mandolin. I try to fix this error by commissioning a lot of different pieces from different composers. I’ve premiered by now over 80 pieces for the mandolin, including 15 full-length concertos. I continue to commission new pieces from living composers every year, every season.” One of his commissions – Avner Dorman’s “Mandolin Concerto” – led to his 2010 Grammy nod.

Now an exclusive Deutsche Grammophon artist, Avital has released exquisite albums of concertos by Bach (arranged by him) and, most recently, Vivaldi. At Aria, he’ll perform selections from his 2014 release, “Between Worlds,” which blurs the lines between classical, folk and popular music and shows how broad his tastes really are. It’s a dazzling, genre-defying journey through Bartok, Bach, Villa-Lobos, de Falla, Ernest Bloch, Georgian composer Sulkhan Tsintsadze and more.

Avital describes the program as “very specific and very personal. It allows a lot of space for listeners to interpret [the music] from their own perspective.” It’s a 21st-century concept with roots in the past: “Manuel de Falla, Bela Bartok, and Villa Lobos all composed classical music inspired by their own heritage.” Avital credits Bartok as his inspiration for “Between Worlds.”

What’s next for this brilliant and curious artist? A project with Israeli jazz bassist and oud player Omer Avital. (They share a family name but are not related.) “Not fully jazz nor world music nor classical, but instrumental music that combines these three genres.”

Avital is touring with Latvian classical accordionist Ksenija Sidorova and Israeli percussionist Itamar Doari (who also tours, jazz fans take note, with the bassist Avishai Cohen). One night only. How many ways can we say “don’t miss this”? FMI and tickets ($30).

Tonight (Thursday, March 3) at the Bell Museum: Sustainability Film Series 2016: “We Are All Related Here.” Get used to hearing the phrase “climate refugees.” Director Brian McDermott’s documentary tells the story of the indigenous Yup’ik people of Newtok, Alaska, who are being forced by erosion and flooding to relocate their village. The screening will be followed by a panel discussion among experts on the environment, ecology, Alaskan communities and climate refugees. Activities, food and drink at 6:30 p.m., film at 7, panel at 8. Free with museum admission.

Opens Friday at Open Eye Figure Theatre: Samuel Beckett’s “Happy Days.” Winnie is Beckett’s happiest character, though she spends her life buried up to her waist and her husband, Willie, who sleeps in a hole, barely speaks to her. It all sounds passing strange and bleak, but keep reading. Director Michael Evans Haney worked extensively with Alan Schneider, who directed the 1956 American premiere of Beckett’s “Waiting for Godot.” Haney and his wife, Amy Warner, who plays Winnie, can currently be seen as Cate Blanchett’s in-laws in the Oscar-nominated film “Carol.” Both Haney and Warner have professional résumés as long as your arm. And the Open Eye is a perfect place to see Beckett. Ends March 19. FMI and tickets ($20/$15).

Saturday at Hopkins Center for the Arts: Pete Whitman’s X-tet. Before the Artists’ Quarter closed in 2013, this great little big band had a monthly gig there – for 12 years. These days it’s a lot harder to find them and hear them. Formed in 2001 as a recording project for the late, lamented Twin Cities label Artegra (which produced some very fine CDs), the X-tet plays mainly originals by members and friends of the band. The current top-tier line-up is Whitman, Dave Milne and Dave Karr on saxes and flutes, Adam Meckler and Adam Rossmiller on trumpets and flugelhorns, Jeff Rinear on trombone, Dave Hagedorn on vibes, Chris Bates on bass, Phil Hey on drums and Laura Caviani on piano. Expect many new originals and a lot of joy. 7 p.m. social hour (free apps and cash bar), 8 p.m. concert. FMI and tickets ($26). Pssst, here’s a Groupon. 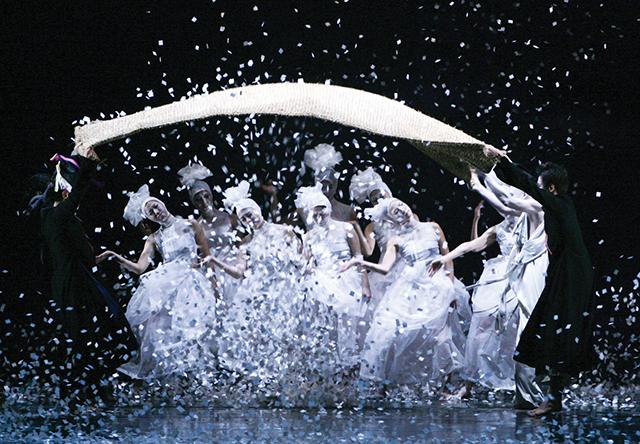 Saturday at the Ordway: SEOP Dance Company: “A Man’s Requiem.” Highly acclaimed, much awarded, gorgeous to watch, this production by the South Korean dance company SEOP has successfully toured nine countries so far. Blending traditional and contemporary Korean dance, exploring the theme of “when a sinner dies, he must be judged,” it suggests that we create our own destinies. This is the Midwest premiere. Here’s a tantalizing preview video. 7:30 p.m. FMI and tickets ($23-$45). 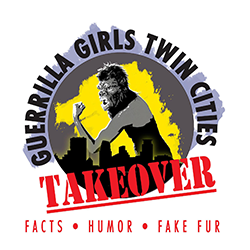 Saturday at the State Theatre: Guerrilla Girls with Chastity Brown. In case you haven’t noticed, there’s more art by women on display around the Twin Cities right now than there has been ever, except back when Amazons ruled the earth. It’s because of the Guerrilla Girls, a group of anonymous art activists in gorilla costumes who have been waging art warfare against sexism and other stupidities for 30 years. They made their first appearance here in mid-January (when they also memorably guested on “The Late Show with Stephen Colbert”) and will wrap up their months-long Guerrilla Girls Takeover at the State with a grand finale multimedia performance. 8 p.m. FMI and tickets ($18). Buy at the State Theatre box office and avoid fees. Here’s a calendar of other events, including several happening tonight (Thursday, March 3) and tomorrow.