Maybe you saw the fascinating “SPACE” exhibition at the Science Museum last year. Supported by funding from NASA, it premiered in St. Paul and drew almost 187,000 visitors before touring science centers across the nation. (It’s currently at the California Science Center in Los Angeles through May 8.)

Now NASA has picked the Science Museum to lead a national effort to inspire the next generation of science explorers. With a $14.5 million contract from NASA, one of the largest the agency has ever awarded, the museum will lead the new Space and Earth Informal STEM Education (SEISE) project. Partnering with Arizona State University, the Museum of Science, Boston and the University of California at Berkeley, it will draw from NASA’s vast storehouse of knowledge and ongoing research to create new exhibits, activities, learning materials and media.

“NASA’s programs are exciting and critical to our nation’s future for space exploration and scientific learning,” new Science Museum president Alison Rempel Brown said in a statement. “The Science Museum is a proven leader at making science concepts inspirational and easy-to-understand  … We are a perfect match.” Governor Mark Dayton added, “This is tremendous news for the Science Museum, for our state, and for millions of curious minds in Minnesota and across the nation.”

NASA has also provided funding to the Science Museum since 2009 for climate change education programs. The Science Museum is one of the nation’s most prolific producers of original science exhibits, creating shows that have been seen by more than 36 million visitors at museums in the U.S. and abroad.

A peek at this week’s ‘MN Original’

At the Strib’s Arts Forum event earlier this week, the Guthrie’s new artistic director Joseph Haj made a point of saying, “I’ve never been in a region that is as committed to the arts in this country, never been in a region the way it is here. It’s extraordinary.” Amen to that. We hope he’s watching TPT’s weekly anthology series “MN Original,” which has from its start in 2010 done an amazing job of finding and profiling artists of all kinds in and around the Twin Cities.

The penultimate episode of the show’s seventh season (yes, it will return next year) takes us to a Syrian refugee camp, storefronts in downtown Minneapolis, an artist’s roots in Colombia and a Minneapolis high school where, thanks to a committed, charismatic teacher, students are speaking their truth and being heard.

Born in Damascus, trained there and in Cairo, now living and working in Minneapolis, photographer Osama Esid seeks the human connection between himself and his subjects, whether he’s photographing strangers in Northeast (which he calls “a piece of heaven”) or children in a Turkish camp for Syrian refugees. His images from the camp are “outside politics. This is a Syrian guy photographing his own people, the worst situation for hundreds of years.” Carting around an old camera, Esid shoots in black-and-white, then hand-colors his work. “I don’t do it as a job,” he says. “I do it as therapy. This is a way for me to feel alive.”

Joan Vorderbruggen was Cultural District arts coordinator for Hennepin Theatre Trust when her “MN Original” segment was filmed. Today she has a new title: director of public art and placemaking. “Made Here,” the downtown Minneapolis initiative that has filled vacant storefronts with art since 2013, was her idea, and today it’s the largest project of its kind in the nation (and probably the world). This “MN Original” segment also features some of the artists whose work has been featured in “Made Here.” The next time you’re walking along Hennepin Avenue and notice art in a once-empty window, you’ll know more about why it’s there. 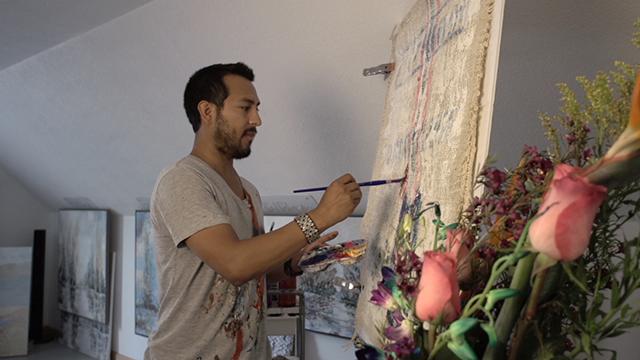 Artist Paul Peterson wasn’t made here; he and his sister, Marita Metcalf, were born in Colombia and adopted by a family in Shoreview. As adults, they found their first family and are now in contact with them. Peterson’s latest series, painted on burlap coffee-bean bags from Colombia, features subjects traditional and native to the region of Colombia where he and Marita are from. (He often works on surfaces other than canvas because they add depth and texture.) His goal: giving back to the family that brought him and his sister into the world.

Thanks to teacher Crystal Spring, students in the Blackbox Acting Program at Minneapolis’ Washburn High School have a rare opportunity to speak out on what matters to them. They can say things like “Dear White America: We don’t want you to ignore our color. We want you to respect it.” And “We can make the world a better place – if you let us survive to see tomorrow.” Spring has been director of the social justice theater program for eight years. “All the work we create here is original,” she says. “All is based on issues going on in the community, the world, our homes, our personal lives.” She calls Central Touring Theater founder Jan Mandell and director/playwright Marion McClinton her mentors. Her students call the Blackbox program a gift. “It’s a class to come to to get out all your feelings and express yourself and no one judges you,” one said.

Now (Friday, April 29) through Sunday at Mia: Art in Bloom 2016. Fine art and floral arrangements are so good together they should get married. Don’t miss this annual celebration of beautiful things, this year with more than 150 floral designs. Free. FMI.

Tonight and Saturday at Patrick’s Cabaret: “Cabaret Cabaret”: The 30th Anniversary Show. Founder Patrick Scully returns to the stage that bears his name for a performance mined from and reflecting three decades of the Cabaret’s history. He’ll introduce the acts – students from the U’s undergrad course “Queer Performance and LGBT Theater,” who have created written work and performance using materials from the Cabaret archives in the Tretter Collection – and perform his own piece, “30 Years in 30 Minutes.” FMI and tickets ($10 and sliding scale).

Tonight at Mixed Blood Theatre: “Charm.” In playwright Philip Dawkins’ comic drama, an African-American trans woman in her 60s teaches an etiquette class to homeless trans youth in an LGBTQI Chicago community center. We’re delighted that the Guthrie under Joe Haj is adding a plurality of voices to its programming, but let’s not forget that Mixed Blood has done this since forever.  7:30 p.m. FMI and tickets ($20 or free through its Radical Hospitality program). Ends May 8. 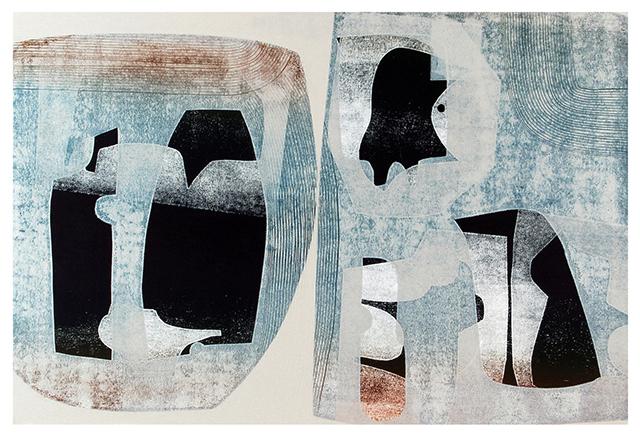 Saturday at Groveland Gallery: Opening reception for Dan & Lee Ross: “Ancient Materials – Modern Designs.” If you’ve been to an art fair or ACC show, chances are you’ve seen the quietly powerful work of these North Shore artists who have worked side-by-side for 40 years. We’re fans of their large and small ceramic sculptures; simple yet eloquent stone carvings; and prints that somehow manage to be modern and timeless, shaped by their travels and the landscape around their home and studio on the shore of Lake Superior. They’ll be present for their opening reception. 2-5 p.m. Free. The show closes June 4.

Sunday in Minneapolis’ Phillips and Powderhorn neighborhoods: 42nd Annual MayDay Festival. What’s May Day in Minnesota without Heart of the Beast’s annual community-building, placemaking, wildly theatrical, causes-filled event? The parade starts at noon at the corner of 25th St. E. and Bloomington Ave. S., travels south on Bloomington to 34th St. E., then turns west toward Powderhorn Park. Catch it anywhere along the route. At 3 p.m. in the park, the MayDay Tree of Life Ceremony begins. Then comes the music, dancing, poetry, food, canoe rides and other activities. It looks as if the weather gods will be kind on that day. FMI. 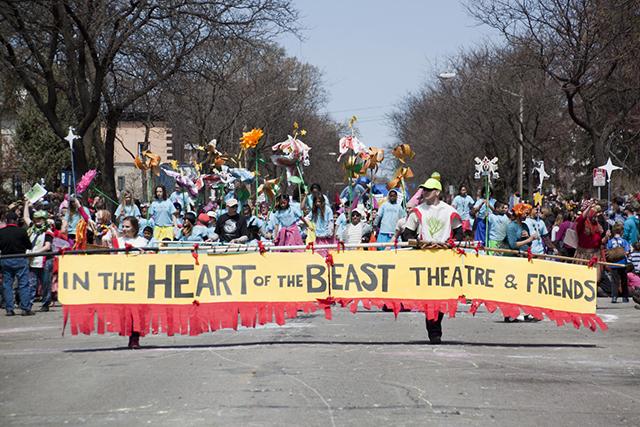 Sunday at the Ordway Concert Hall: The Rose Ensemble’s 20th Season Celebration. Come for all or part of the big shebang, which starts with a gathering and social time (12:30 p.m.), moves to brunch in the Marzitelli Foyer (1 p.m.), continues with the superb ensemble’s first performance in the sublime Concert Hall (3 p.m.) and ends with an after-party in the foyer (4:15). The concert of Renaissance and Baroque music includes three Magnificats and works by Purcell, Bach, Handel, Scarlatti and Monteverdi. FMI and tickets ($150 for everything, $30/$50 for the concert and party).

Sunday at the History Center: Spicy Masala Chai Dance Show. The high-energy, colorful, family-friendly dance drama about three Indian bachelors in Uptown is the highest-selling show in the 22-year history of the Fringe. One performance only. 2 p.m. FMI and tickets ($20/$10).

Sunday at Magers & Quinn: Photographer Steve Schapiro discusses his books “Bowie” and “Bliss: An Exploration of the Current Hippie Culture & Transformational Festivals & The Neo Hippie.” He’ll talk about both books, but most people will probably show up to hear more about “Bowie,” with its mostly unpublished-until-now images of a famous all-night 1974 photo session during which the acclaimed photographer and the pop star hit it off and Bowie went through countless costume changes. 5 p.m. Free.