Even if you’ve seen “The Fantasticks” a zillion times, you’ve never seen it with two mature actors as the starry-eyed young lovers and two women as their scheming fathers. But that’s how Nautilus Music-Theater’s artistic director Ben Krywosz wanted to do it, and once he had his dream cast in place – real-life, long-married couple Gary Briggle and Wendy Lehr as Matt and Luisa, real-life sisters and young mothers Christina Baldwin and Jennifer Baldwin Peden as their fathers – it was a go.

If you’re new to “The Fantasticks,” here are a few things to know. The romantic fable by Harvey Schmidt and Tom Jones is history’s longest-running off-Broadway musical: over 17,000 performances in 42 years at the same Greenwich Village theater. Thanks to its small cast, small band, simple set, minimal costumes, timeless story and catchy songs, including “Try to Remember,” it’s also one of the world’s most widely produced musicals, with more than 11,000 productions in thousands of cities and towns in all 50 states and more than 65 countries.

Krywosz wants us “to see and hear it as if for the very first time.” The unusual casting compels the audience to do that. It also asks the actors to rethink a work with which they are all deeply familiar. We spoke with Briggle about the surprise of Krywosz’s approach and what it means to him.

“Ben came to Wendy and me in late December and said he had this notion of doing ‘The Fantasticks,’ which we both did in our youth. I played Matt in high school, and she played Luisa just out of college, in summer stock. We were so taken aback, because there’s no way to prepare yourself for looking at the show through that lens, [with] Wendy and I, who have been married 33 years, playing the lovers. [But] the more Ben talked about the power of memory, the power of love, the power of the painful price sometimes of learning life’s most important lessons, and the more we thought about how much we appreciated this practically perfect little musical, it seemed like an exploration and an experiment worth going on.”

Unusual castings are not all that unusual these days; the Jungle just wrapped “Two Gentlemen of Verona” with an all-female cast, and Ten Thousand Things has been mixing things up for years. “Wendy and I are not imitating teenagers,” Briggle explained. “We are not playing Matt and Luisa in an attempt to convince anybody that we are actually 20 and 16. … Matt has been to college, considers himself grown-up, fancies himself educated, intellectual, even poetic. Luisa longs to be extraordinary and is highly romantic. These qualities take on a very different tone when the characters are in late middle age. … We have left behind all of the stereotypical approaches to all of the characters.”

And even combined three characters into one. The mime, the old actor and his assistant are all played by Brian Sostek. William Gilness is El Gallo, whom Krywosz calls “the mysterious narrator.”

Why does it matter that audiences see this old show in a new way? “Everybody assumes they already know ‘The Fantasticks,’ that it’s a done deal – like ‘Our Town.’ We all believe that there are extraordinary riches caught in the gossamer threads of this piece – in the poetry, the exquisite tenderness and heartbreak – which deserve to be appreciated. … I’ve got a head of white hair, and Wendy is not a spring chicken anymore, and we are a couple. It’s quite extraordinary to sing love songs all night long to the woman you love. I hope that all of those things, along with other nuances we’re finding, will take an audience’s breath away.

“And it’s not just Matt and Luisa who are differently cast. We have two sisters with children under 10 [the Baldwins] who are bringing their very modern experiences as parents into the mix. So the fathers in this case are not the slightly vaudevillian types we usually see. … If we’re finding different colors, different tones, different moods and different angles on this material, informed by age and experience, wisdom, sorrows, a greater appreciation for joy and a deepening of love, I guess I would say that’s our intention.”

“The Fantasticks” opens Friday, April 8, for 12 performances at the intimate Nautilus Music-Theatre studio in St. Paul’s Lowertown, 308 Prince St. No. 190. Stage direction by Ben Krywosz, musical direction by Jerry Rubino, set and costumes by Victoria Petrovich, lighting by Michael Wangen, and that award-winning, totally unexpected and killer cast. FMI and tickets ($40). Ends April 19. See updates on the Facebook page. (The theater’s website is being redesigned.)

BTW “The Fantasticks” is based on a play called “Les Romanesques” (The Romancers) by French poet and dramatist Edmond Rostand. On now at the Ritz, Theater Latte Da’s “C.” is based on the play “Cyrano de Bergerac” by, guess who, Edmond Rostand. Both of the original plays date from the 1890s.

One day, two stages, eight bands – and we now know who they are. Announced Tuesday by the Walker and the Current, here’s this year’s lineup for Rock the Garden, moved to Boom Island Park in northeast Minneapolis while the Walker’s campus is being renovated.

Move from stage to stage while enjoying views of the Minneapolis skyline and the Mississippi. Tickets went on sale to Walker and MPR members yesterday (Tuesday) at 10 a.m.; they’ll go on sale to the general public today (Wednesday) at 10 a.m. FMI and tickets ($59-$150).

Thursday at the Bell Museum: Film screening: “This Changes Everything: Capitalism vs. the Climate.” Based on the bestselling book by Naomi Klein, this film sold out two Minneapolis screenings last fall. Part of the Bell’s Sustainability Film Series 2016, followed by a panel discussion with Charlie Thayer, author, Bush fellow and Anishinaabe from the Lac Courte Oreilles and White Earth Nation; sixth-term Minnesota Rep. Melissa Hortman; and applied economics professor Jay Coggins. 6:30 p.m. light snacks and mingling, 7 p.m. film, 8:30 panel. Free for U of M students, staff, faculty and guest students; all others pay museum admission ($5/$7/$8). 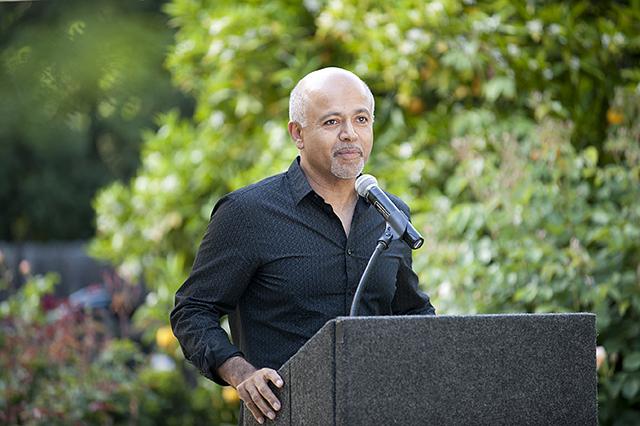 Thursday at Northrop: An Evening with Dr. Abraham Verghese. For the 15th annual Esther Freier Endowed Lecture in Literature, Verghese, author of the bestselling novel “Cutting for Stone” (one of Amazon’s 100 Books to Read in a Lifetime) and two memoirs (“My Own Country,” “The Tennis Partner”) will speak about the relationship between literature and medicine, answer questions and sign books. 7:30 p.m. Free and open to the public; no tickets necessary.

Now at the University of St. Thomas: 36th Annual Sacred Arts Festival. This year’s theme is “Contemplation.” All events are free and open to the public. • 6 p.m. Friday, April 8: Art lecture: “From the Study to the Studio: Creating Contemplative Art.” By Dr. Deborah Haynes, professor emerita of art and art history at the University of Colorado, Boulder. • 7-9 p.m. Monday, April 11: Klenengan: The Sumunar Gamelan Ensemble of Minnesota. An informal performance of gamelan music for contemplation. Come and go as you please; tea will be served. • 7:30 p.m. Wednesday, April 13: Author reading: Amelia Gray. The Los Angeles-based novelist and short-story writer reads from her latest collection, “Gutshot,” featuring stories about the search for the divine in the lowest of places. • 5:30-7:30 p.m. Friday, April 15: Reception for the art exhibit “In Their Element: Artists Inspired by Earth, Air, Water and Fire.” The show closes May 15. • 7:30 p.m. Friday, April 15: Choral concert: J.S. Bach’s Cantata No. 4, “Christ lag in Todesbanden.” The famous Easter cantata, performed by the Bach Society of Minnesota with the combined choirs of St. Paul Seminary School of Divinity Chorale and St. Thomas’ Schola Cantorem. FMI including locations, all events.