While there’s nothing wrong with brunch – we like brunch – we think Mom deserves something different for Mother’s Day this year, something new and even richer than the hollandaise on eggs Benedict. Like a concert, a play or an Artist Salon. An experience that will make more memories than a mimosa.

Stephen Hamilton, an internationally known concert organist who lives in our midst (after several years as minister of music at the historic Church of the Holy Trinity in New York City), embarks soon for a European summer tour, where he’ll play the great organs of Notre Dame de Paris, Merton College in Oxford and the Cathedral of Saint Peter in Bavaria. Before then, he’ll give a free concert Mother’s Day afternoon (Sunday, May 8) at Elim Lutheran Church in Robbinsdale, with music by Jean Langlais, César Franck and Bach, among others. 3 p.m., one hour, no intermission. A few days later, on Tuesday, May 10, he’ll be at the historic Church of Saint Louis, King of France in downtown St. Paul for a lunchtime performance (also free) of music by Widor, Messiaen, Franck and Dupré. 12:35 p.m., one hour, no intermission. The Saint Louis program is the one he’ll play at Notre Dame.

At Orchestra Hall, two Greater Twin Cities Youth Symphonies Festival concerts will showcase eight orchestras (four each), from beginning to pre-professional. Both finales will feature everyone playing Holst’s “Jupiter” en masse. Moms will be out in force. Tickets for both are $13-$19 adults, $9-$15 students. Festival I (1 p.m.), Festival II (4:30 p.m.; better availability).

The Moving Company is offering a Mother’s Day special for its new play, “Every Sentence Is for the Birds: A Journal of an Encounter.” A new work inspired by the writings of avant-garde Austrian playwright, novelist, poet and essayist Peter Handke, French philosopher and art critic Denis Diderot, Italian physician and educator Maria Montessori and filmmaker François Truffaut (think especially of his “L’Enfant Sauvage”), it explores the relationship between a scientist (Suzanne Warmanen) and a feral “wild child” (Nathan Keepers) she meets in the woods. The script was created by Warmanen, Keepers and director Dominique Serrand, whose working relationship reaches back to the Theatre de la Jeune Lune. We haven’t yet seen this, but people are calling it “profound,” “funny,” “and “magical.” 2 p.m. at the Lab Theater. FMI and tickets ($32 adult/$20 student; use code MOTHER20 for $20 adult tickets). Ends May 22.

NPR called Michael Steinberg “one of classical music’s most insightful and readable critics.” When he died in 2009, his wife, Jorja Fleezanis, the former concertmaster of the Minnesota Orchestra, established a fund in both their names to commission new music that incorporates words, either existing or newly written. The first annual commissioned work will have its world premiere Sunday at MacPhail’s lovely Antonello Hall. Composed by Justin Merritt, associate professor of music at St. Olaf in Northfield, “Ithaka” is scored for chamber ensemble with narrator; the words are those of C.P. Cavafy’s poem by that name, which Steinberg and Fleezanis often presented at readings. They loved its message: Accept each day as a full measure of life, rather than considering the present as a stage to pass through on the way to something better. The performers are Fleezanis (violin), David Pharris (clarinet), Anthony Ross (cello) and Karl Paulnack (piano), with Stephen Yoakam as narrator. The program also includes Messiaen’s “Quartet for the End of Time.” 4 p.m. FMI and tickets ($25/$10 students).

Uzbeki-born Israeli pianist Roman Rabinovich made his Israel Philharmonic debut at age 10, with Zubin Mehta conducting. He won the top prize (and four more awards) at the 12th Annual Rubinstein International Piano Master Competition in 2008 (by then, he was all of 23). He often combines his concerts with exhibitions of his paintings; Rabinovich is also a serious and respected visual artist. For his Mother’s Day appearance with the Frederic Chopin Society, he’ll play “Surfaces,” a new work by award-winning American composer Michael Brown (which was inspired by a series of four of Rabinovich’s abstract paintings) and music by Haydn, Beethoven, Schumann and Stravinsky. 3 p.m. at Macalester’s Mairs Concert Hall in the Janet Wallace Fine Arts Center, 130 Macalester St., St. Paul. FMI and tickets ($25/$15 students). 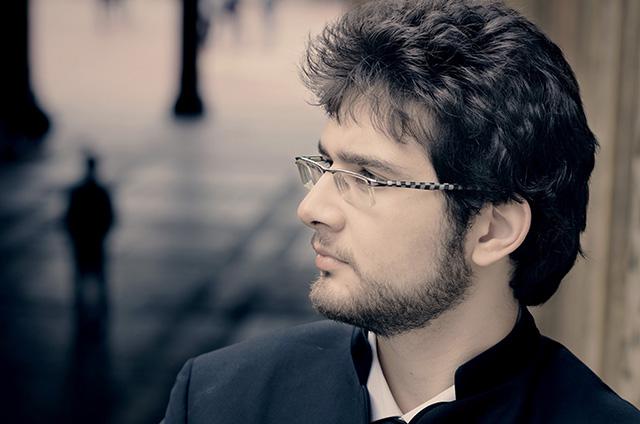 What makes Vivaldi’s “The Four Seasons” so popular, so enduring, so lovable? It’s four concertos of catchy, sparkly, foot-tapping classical music that paints pictures in our minds. We hear the music, we see the cuckoo, we feel the winter wind and smell the rain. Most of us recognize and can even hum some of the tunes. On Sunday, the early music chamber ensemble Flying Forms will play “The Four Seasons” and “Il Gardelino” concertos, instrumental selections from Purcell’s “Fairy Queen,” and a suite by Couperin that imitates birdsong in a concert called “Nature and the Four Seasons.” With soloists Marc Levine, violin, and Cléa Galhano, recorder. 3 p.m. in the Baroque Room, an intimate, made-for-music performance space in Lowertown. FMI and tickets ($20/$15 seniors and students).

A couple dozen tickets remain for the final performance of “Fiddler on the Roof” at Artistry in Bloomington. Tradition, tradition! John Paul Gamoke is Tevye in a production directed by Michael Gruber with musical direction by Anita Ruth. 2 p.m. in the Schneider Theater. FMI and tickets ($36 adults/$32 seniors/$27 ages 25 and under).

The Musical Offering is celebrating women composers (and artists, and a blogger) on Mother’s Day with a concert of music by Germaine Tailleferre (the light, breezy Sonata Champêtre) and Louise Farrenc (Piano Trio in E minor), plus fellow Frenchman Jean Françaix (String Trio). On stage during the performance will be large-scale works by Minneapolis-based painters Louise Gillis and Lois Rhomberg, both referencing music. An intermission interview will feature the ensemble’s pianist, Susan Billmeyer, and Emily Hogstad, whose “Song of the Lark” blog was essential reading during the Minnesota Orchestra lockout. 3 p.m. at Hamline’s Sundin Music Hall. FMI and tickets ($25/$10 student).

Distinguished Israeli-American composer Ofer Ben-Amots takes part in a Rimon Artist Salon on Sunday that includes the world premiere of his duet for violin and piano, “Bulgariana,” performed by pianist Ora Itkin and violinist Stephanie Arado; his popular “Odessa Trio”; and a discussion with Itkin about the creative exchange between composer and interpreter – a look into what happens on both sides of the music. Ben-Amots won his first major prize at age 16; studied in Tel Aviv, Geneva and Detmold, Germany; and studied with George Crumb at the University of Pennsylvania. The Rimon Artist Salon series, now in its 9th season has been called “one of the leading series of Jewish events in the country.” 4 p.m. at the Bedlam in St. Paul. FMI and tickets ($12/$6 ages 30 and under).

Patrick’s Cabaret will soon have to vacate the Minneapolis firehouse it has called home for 16 years; it was sold by the owner in March. Transgender glam rocker Venus de Mars has been a Cabaret mainstay from the start, and on Sunday she’ll return for a solo performance and a screening of the documentary “Venus of Mars.” The night will begin with music by rockers Tender Tomboys; director Emily Goldberg will introduce her film, which features Venus as she negotiates love, gender and transphobia and builds new community with her music. 7 p.m. Admission is suggested donation.

Take mom to ‘Fiddler,’ or an organ concert, or ‘Every Sentence’ or …